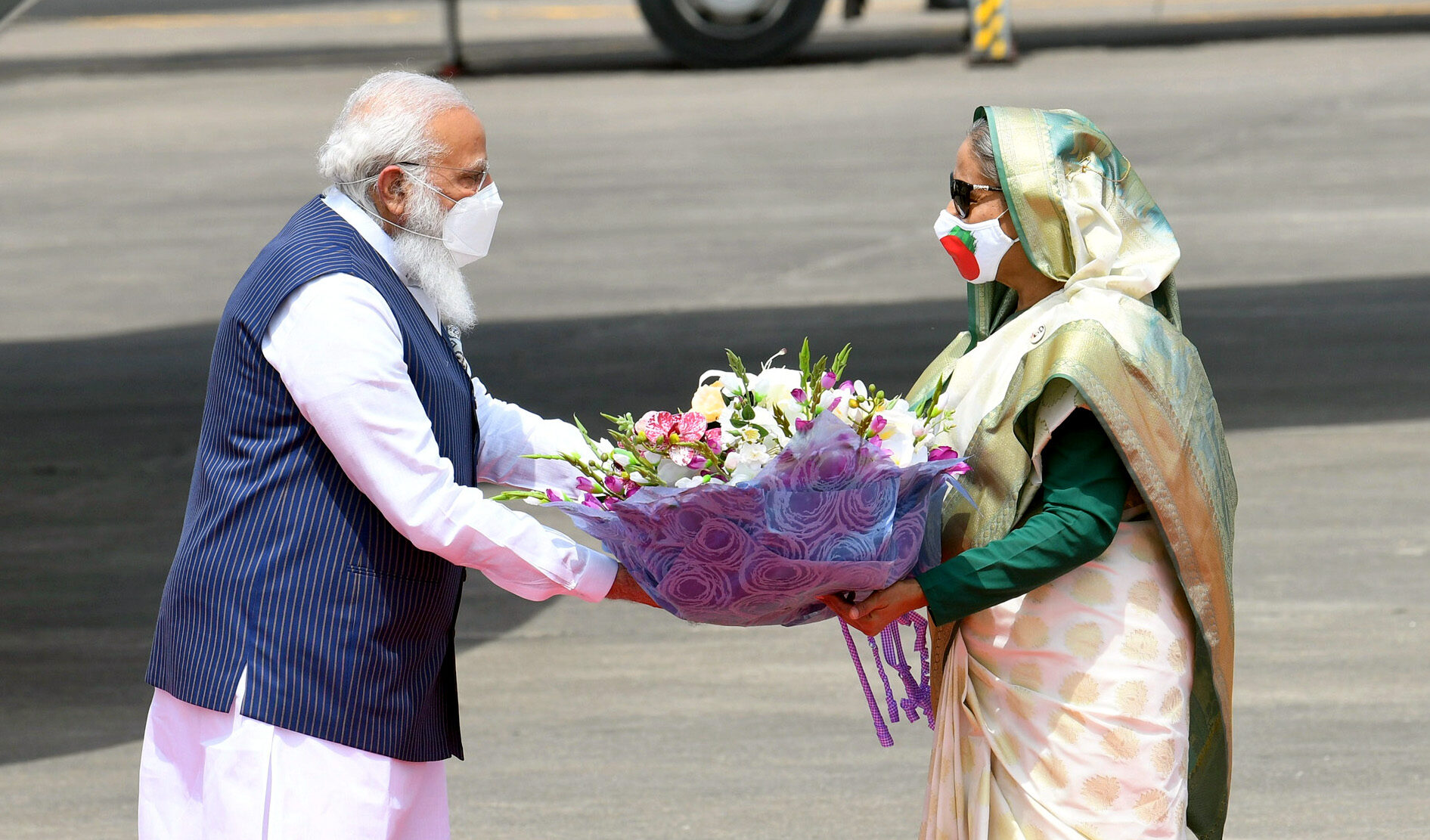 Modi’s visit to Dhaka, the capital of Bangladesh, was part of a two-day trip to celebrate the neighbor’s Independence Day. Leaders from Sri Lanka, Bhutan, Maldives, and Nepal were also present. The trip commenced on March 26, the birthday of Sheikh Mujibur Rahman, the founder of Bangladesh and father of prime minister Sheikh Hasina.

At least 13 people died, and another 300 were injured in the clashes that continued over the weekend from March 26-28.

The clashes have spotlighted the rising anti-India sentiments in Bangladesh despite its amicable bilateral relations with India since the country was christened in 1971. The ties have been strained since the Modi-led right-wing Hindu nationalist party came to power in 2014. 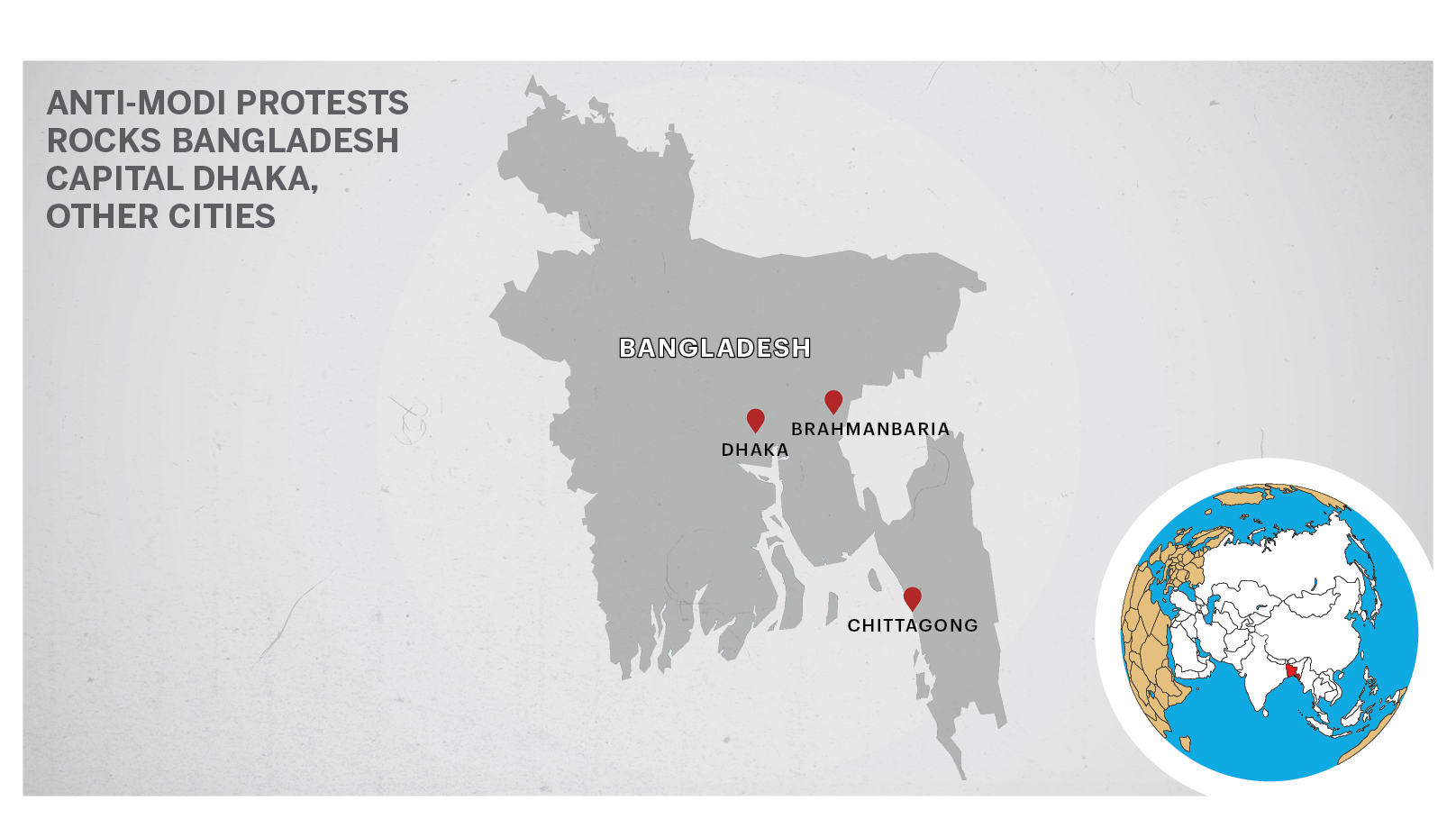 Legislations such as the Citizenship Amendment Act and the National Register of Citizens have not fared well with the majority Muslim population of Bangladesh, who see it as a blatant attack on the identity of their fellow brethren in India.

Repeated allegations from the ruling Bharatiya Janata Party of Bangladeshi immigrants settling in India have done more harm than good.

“Since 1971, India has failed to maintain a cordial relationship. We have many unresolved issues such as the sharing of river water, and there have been several unaccounted killings of Bangladeshi civilians by India’s Border Security Forces.”

“After 2014, when Modi came to power, the sentiments grew more, especially against him,” he said. Islamabadi believes Bangladesh gave a lot of concessions to India, which India did not reciprocate.

India and Bangladesh share 54 rivers, of which 53 flow upstream from India to Bangladesh before merging into the Bay of Bengal. This allows India to regulate water flow. Except for the Ganges, the longest river in India, the two nations have not signed an agreement on any other river.

The killing of Bangladeshi civilians by India’s Border Security Forces is another point of contention. India and Bangladesh share a large border across five Indian states, with the longest one in the eastern state of West Bengal spanning 2,217 kilometers (1,378 miles).

“Indian government orders to its border forces to exercise restraint and limit the use of live ammunition have not prevented new killings, torture, and other serious abuses,” Meenakshi Ganguly, South Asia director at Human Rights Watch, said in a report.

“The government’s failure to hold security personnel accountable has led to further abuses and the harassment of impoverished and vulnerable populations.”

These killings triggered a wave of widespread anger and displeasure fanning the anti-India sentiments already prevalent in Bangladesh.

“We are friendly neighbors, and India has greatly contributed during our Liberation War. We want to maintain this friendly relationship that has been warmly maintained since the Hasina government came into power.”

Since Modi’s first visit to Bangladesh in 2015 and Hasina’s return trip to India in 2017, the notable developments in bilateral ties include resolution of the long-pending land and maritime boundaries asserting the issue of enclaves  Further, India’s exports to  Bangladesh in  FY 2018-19 stood at $9.21 billion and imports from  Bangladesh during the same period were $1.04  billion.

“However, the relationship has deteriorated in the past couple of years,” Rezaur Rahman Lenin, human rights consultant for the U.N. Resident Coordinator’s Office, told Zenger News.

“For instance, if we consider the Rohingya crisis. Previously, India helped Bangladesh immensely. But now they are completely against the Rohingya issue.”

Lenin believes the relationship between the nations is “not balanced,” and the cordial bilateral ties depend on both nations’ negotiation capacity, accountability, and transparency.

“To maintain peace inside the country, India needs to keep a healthy relationship with Bangladesh,” Lenin said. “If the government of Bangladesh does not care about the civilians of the country, it is worrying.”

“There is immense pressure from the civilians and the opposition parties on Awami League [the ruling party in Bangladesh] to rethink the cordial relationship between India and Bangladesh,” said Islamabadi.

The latest clashes erupted on the same day (March 26) in Dhaka and other places such as Brahmanbaria and Chittagong.

“At the beginning of the protest, the law-enforcement agencies did not intervene,” Huq said.

“The protesters started vandalizing and damaging public property, and then the police intervened. The police pleaded with them to stop the hooliganism, but after they refused to obey, the police had to adopt certain measures.”

Angry protesters were met with tear gas, rubber bullets, and batons when they threw rocks and stones at the security forces. The police allegedly opened fire at the protesters to quell the situation. Huq believes the law enforcement agency’s measures were not aggressive but defensive.

“In certain areas, the police contingencies were constantly threatened with death,” said Huq. “The police resorted to certain measures for self-defense. During those clashes, there were few casualties.”

The Bangladesh government has blamed a Pakistani group for its alleged role in the clashes.

“Recent violence by the Islamist radicals in Bangladesh had backing from outlawed terrorist group Jamaat-e-Islami, which in the past had strong links with Pakistan’s Inter-Services Intelligence,” tweeted Bangladesh’s Parliament.

Jamaat-e-Islami is the largest Islamist political party in Bangladesh.

Civilians and students of madrassahs (religious schools), backed by Hefazat-e-Islam, led the protests that killed five on March 26, six on March 27, and another two on March 28.

Islamabadi, one of Hefazat-e-Islam’s leaders, said: “The protest was peaceful initially.”

“Supporters from the Awami League helped the security forces attack the protesters,” he said. “The police opened fire at unarmed people and killed four of them. That was the main reason to protest against the Awami League for the next two days.”

Hefazat-e-Islam called for a nationwide shut down on March 28 to protest the attacks on those present in the rallies held against Modi.

While police officials said there were 13 deaths, the hard-line group claimed there were many more casualties which the Bangladesh government was hiding.