His lengthy trip on a two-wheeler has mixed many moments of joy with occasional perils, including a run-in with a criminal gang.
By Christian Valera Rebolledo April 7, 2021
Facebook
Twitter
Linkedin
Email 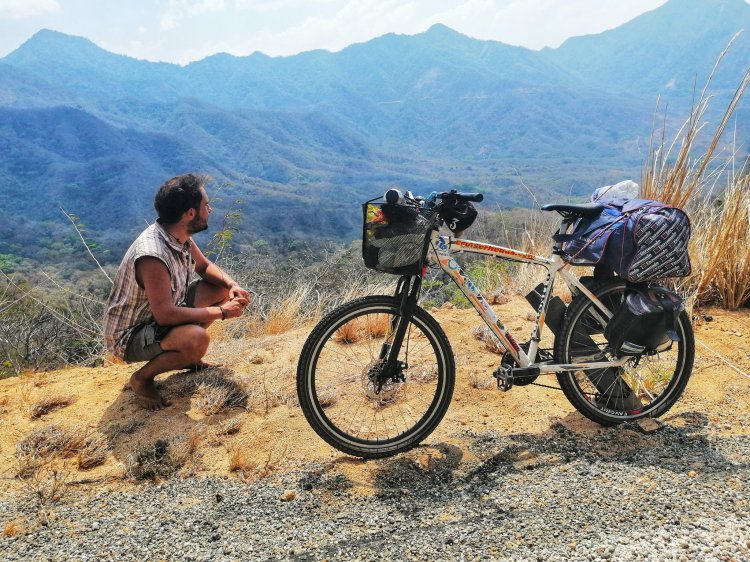 Tabaré Alonso says that it is important for people to follow their dreams and believe themselves capable of achieving them. He is travelling from Uruguay to Alaska by bicycle. (Courtesy Tabaré Alonso/@tabarealonso)

Traveling to another country has always been risky. However, the excitement over going on an adventure usually triumphs over any fears.

Take the case of Tabaré Alonso, who defines himself as a free spirit. Four years ago, the Uruguayan-born adventurer decided to leave his friends and parents behind, took up a bag of rice, two cans of tuna and the skills he learned as a telecommunications technician and started a bicycle trip from his native country toward Alaska. Thus far, he has crossed over 15 countries, reaching Mexico City without any thought of stopping till he reaches his goal.

“I had a dream, one that I could not fulfill since I did not have the money to travel and the fact that I know nothing of tourism. I did not have any knowledge of different climates, of possible insecurity,” said Alonso, 33. “But I was not about giving up. The bicycle has given me the willpower to say, ‘I can do this. I am capable.’”

His bicycle has helped him connect with people and see places that he might have never seen otherwise.

“I could have traveled by plane or by car, but I preferred via bicycle, as I can make real contact with people. Moreover, due to its versatility, I can go to almost any town, no matter how difficult or narrow the roads are, and have no need to depend on anything like gasoline,” said Alonso.

Each country has offered him its adventure.

He started his journey by arriving in Argentina and, from there, to Bolivia. In Peru, he had the opportunity to climb the Andes Mountains. In Brazil, he had his bike stolen and had to get it back before continuing to Venezuela. There, he felt so at ease that he decided to spend six months there.

Afterward, he went to Colombia, Panama, and Costa Rica. In Nicaragua, he went through the country’s massive rainforests to arrive in Honduras, continuing his journey into El Salvador, Guatemala and Belize.

He has traveled more than 9,000 miles, documenting his whole adventure in his book, “Un Viaje por América en Bicicleta.”

“In my native town, I would never have imagined that a bearded man —someone like me— would come and that I would invite him to my house, after just two minutes of knowing him so to celebrate Christmas with him,” said Alonso. “I believe that it all has been possible due to the great amounts of love that exist in Latin America. It is for that reason alone that my bike was named ‘America.’ It has all been possible to the many people that I meet day after day.”

The pros and cons of traveling through several countries

Dream landscapes and places that look like slices of heaven contrast with the many risks that such a long trip would represent, such as robberies, diseases like COVID-19, or even instances of organized crime, as happened to Alonso in the border between the Mexican states of Guerrero and Michoacan.

“Many people recommended me not to say that I was making a journey across the Americas or that I was writing and documenting everything. They told me to say that I was on a pilgrimage for the Virgin of Guadalupe and that I would be getting support along the way,” said Alonso.

“When I started to find people along the road, I told them that it was a pilgrimage, and they would me give me around 50 pesos and wish me a safe journey. I cycled through that 200-kilometer road with a beautiful landscape around me, and even though I was stopped by what appeared to be a criminal gang, I said that I was on a pilgrimage, and they let me through.”

Alonso says that he has seen many instances of filial love and humanity in various places of Latin America, especially in Mexico City. He had arrived at the city’s Salesiano Park, well after sunset. A female police officer immediately approached him.

“I arrived alone at that park to sleep in one of the benches, and the police officer who took care of the park ‘adopted’ me, receiving me as if I were her son. She gave a place to sleep on and some coffee,” said the cyclist. “Moreover, the Mexican cyclist community has supported me by buying the handmade objects that I have fabricated during my journey. I have received so much love that although I expected to only stay here for two days, I have just finished my second-week stay.”

So far, he has been traveling for 4 years and has visited 15 countries. By his calculations, he hopes to reach Alaska in just two more years. Before that, he will visit other Mexican states to cross to the U.S.A. and then into Canada.

“I want to continue by going to Queretaro, Guanajuato, Jalisco, Aguascalientes, San Luis Potosi, Tamaulipas, among others,” he said. “From there, I will go north till I reach the United States. It will take a year, as I want to follow Route 66, then keep going north until I reach Canada and stay there a few months while I work to reach Alaska. I wager that it will take me two years, which may have delays due to the COVID-19 pandemic.”

In addition to his inseparable and trusty companion — his bicycle— Alonso also carries a blanket, a tent, and a pot to cook his food.

He encourages everyone he comes across to follow their dreams, no matter how difficult they may be, and not to let monotony and routine rob them of the chance of discovering new things.

“The first and foremost important thing one has to do is to listen to themselves,” he said. “We all have dreams and projects, so when we feel that tickle across our bodies; that voice telling us to do it, it is time to go, no matter if the person feels unready or thinks they do not have the money, even if they do not have the support of their friends and family. If it is their dream, they must rise and go against everything and everyone if needed.”