Marines And Movies: Darius Cottrell Is Finding His Role In Hollywood 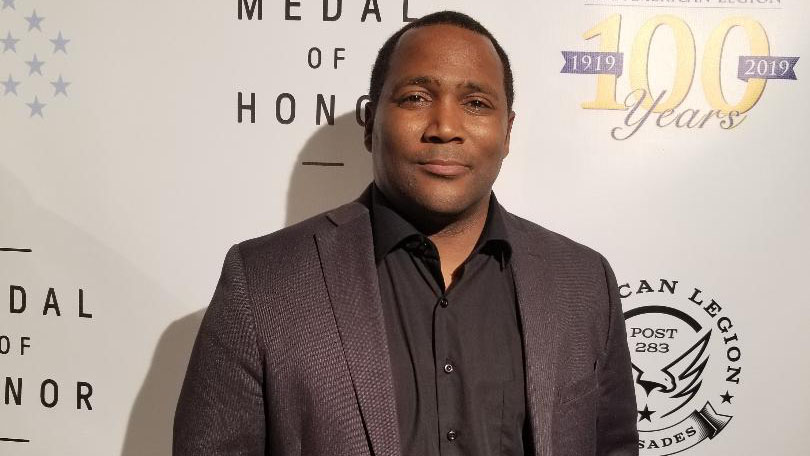 Drawing from lessons learned in the Marines, Darius Cottrell would regroup, eventually landing roles next to some A-list names. (Courtesy of Darius Cottrell)

Darius Cottrell was fairly young when he decided what to do with his life. Time spent with his uncle led him to the military. Still, he nurtured dreams of becoming an actor. Cottrell soon learned the two could go hand-and-hand.

After serving in the Marine Corps, he embarked on an acting career — but tanked his first audition. Drawing from lessons learned in the Marines, Cottrell would regroup, eventually landing roles next to some A-list names, including Eddie Murphy, John Travolta, Vivica A. Fox, Don Cheadle and Bradley Cooper.

He got his break in the 1999 crime drama “The General’s Daughter.”

In search of the perfect role, Cottrell has tapped into his ability as a writer and is currently working on a script, “Sheep Dogs: State of Emergency,” he hopes will showcase his full acting potential. The actor, writer and producer says he is ready to secure his breakout role.

Cottrell spoke to Zenger News about his journey from the military to the movie screen.

Zenger: What led you to joining the Marine Corps?

Cottrell: (Laughing). A lot of things happened. The very first thing was, I fell in love with it when I was 10-years old. I was with my uncle at Parris Island, where he was a drill instructor. I was visiting him and saw the Marines there, and just fell in love with the Marine Corps. Then, after that, it was just different destinations in my life. Honestly, I got in trouble in high school. But I was in a position to be in the Marine Corps. Once that happened, I decided to go active duty. I just needed to get away from South Carolina. Next thing I know, I’m in Camp Pendleton, California.

Zenger: Did you learn values in the Marine Corps that helped you throughout life?

Cottrell: I would say 100 percent yes. My grandmother instilled a lot in me that the Marine Corps just expanded upon. Some core values learned in the Marine Corps that I hold on to today: Always take care of people. Always be there for others. Make sure you leave things better than when you showed up. Put in a plan and say: I’m going to achieve this.

From plan to goal, there may be different roads you have to travel, some detours, but your purpose is to complete that goal. One thing the Marine Corps instilled in me is that we complete our goal no matter what.

Zenger: When did you get the idea to become an actor? Before the Marines or after?

Cottrell: It actually happened when I was younger. I knew this when I was 12 years old. I was watching TV and I wanted to do this and that. I didn’t think about actually doing all of those things, but I knew if I was an actor, I could have all those careers.

Then, when I got into the Marine Corps, I deviated, because I fell in love with the corps. But it was still in my heart. I was in school in Meridian, Mississippi, to get me to my duty station, and I said: “You know what God, if your goal for me is to be an actor, my first duty station will be in California.” And I got Camp Pendleton. And I said: “Well, I guess this is what I’m supposed to do when I get out.” It shocked me.

Zenger: Once you’ve been through the Marine Corps, it seems nothing could rattle you. Do you remember your first audition?

Cottrell: My first audition didn’t go that well (laughing). I literally left the audition going: “I’m a Marine, why was I so nervous in there?” I was rattled, and it didn’t make sense. I have faced things much worse than these two people. I was shaking like a leaf. The paper was going left and right, and I left the audition thinking: “What just happened? Where did that come from?”

It was a different atmosphere. I spoke in front of people before. That had never been a problem. I actually had to speak in front of generals, captains and sergeant majors. I had to do briefings. But the thing is, that [audition] atmosphere was something that I didn’t know how to prepare.

Zenger: The list of legendary actors you worked with, while holding your own, is endless. How were you able to pull it all together?

Cottrell: My first time being on stage. In 1999, my church was putting on a play, I’m still at that church today, and the director asked me to play the lead role.

At that point, I had already taken some classes. But I got on stage for the very first time, and felt the vibe from the audience, it fueled everything in me. It was like a trigger went off. It was like, this is the energy, we see what you’re here for and what you’re called to do.

That very first moment where I felt the vibe of the audience just changed everything. I started seeing characters different I started seeing scripts different, and how you’re supposed to interact with your audience. I channeled all that to be in front of the camera.

Zenger: What would you say was the best advice that remains in your journey?

What pushed me forward even more was Donald Sutherland. I worked with him … I basically was working with Don Cheadle. He asked me to do this dialogue while he was on a phone call. I’m like, “Wow, Don, there’s too many big names in here.” He was like, “No, you got this.” So, I did it and soon as we got done, Sutherland — who was playing a judge — called me up and said: “You, sir, are an amazing actor.” And that stuck with me to this day. For Donald Sutherland to say that to me, he saw something in me that I hadn’t seen yet.

I know I’m still growing as an actor. Some roles are going to showcase more of what he sees. But I have yet to play the role that will showcase what he saw.

Zenger: What type of role will that be?

Cottrell: It hasn’t been written yet. It’s something that I’m writing. It’s really not about me. I don’t know if you have looked at my Instagram page, but I always say this — it’s not about me, it’s about Jesus.

I’m writing a role, and it’s about a husband who lost his family and he went to a dark place. He becomes an alcoholic. He still has his practice as a doctor, but his partner is running the practice. He’s just been lost for the past year. He meets someone, and to give away the end of the story, the person that he meets was actually the drunk driver that killed his family.

Zenger: I’ve always been fascinated with the plot of a story coming together. What is the writing process for you?

Cottrell: My process is slightly different from everyone else’s. Some writers like to be isolated. I like isolation, only because once I get flowing, I can’t have someone distract me because I’m in this zone. I pray prior, I start listening to worship music, and the funny thing is, the whole time I’m writing, I’m listening to music. And sometimes that does influence certain parts of the script.

It’s like the first feature film I wrote, which is what we’re working on right now as a production company. We are getting the funding for it. There are songs all through the film. Once you see the film, and you hear the songs, it all fits properly. There’s also a TV series we’re working on. I was finishing up the script, and a song came on that I never heard before. I said, “Wow, this song is perfect for the end of this first episode.” That influenced me to add a song to the end of each episode that kind of tells that whole episode.

After the first script I wrote, I talked to an established writer. I told him that I didn’t write the story, the story wrote itself. He said, “You found something that most writers haven’t found yet. You don’t pigeonhole the story.” You let the story breathe. It has life. Let it tell its own life.