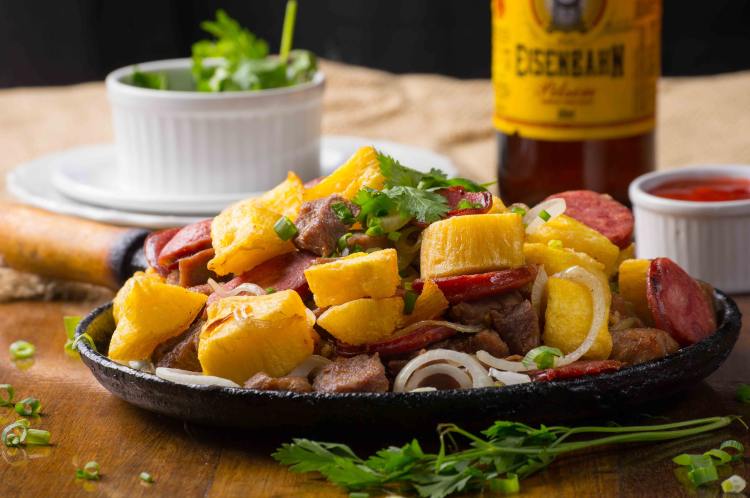 Cuba is an earthly paradise, from its landscapes and its people to its gastronomy. Cuban dishes carry influences from Spanish, African, Arabic and Chinese cuisines.

Indigenous people in Cuba barbecued their food using firewood in pre-Hispanic times, the era prior to the Spanish conquest of the Western hemisphere. They often cooked meat directly on the fire, holding it with a branch or made stews using clay pots. They rubbed their meats with herbs and spices.

The island’s cuisine took an interesting turn with the arrival of the conquistadors. They brought cows, goats, pigs, sheep and horses. The colonizers also introduced birds, including chickens, ducks and pigeons, and imported lemons, limes, oranges and figs.

Cuba’s contemporary cuisine includes plantains, tubers, rice and beans. Plantains and tubers are the base of heavy meals. Cubans usually eat them at noon or in the afternoon, and they eat rice and beans at lunch or dinner.

Cubans give their singular touch to fish and meat, adding sauces, paprika, cumin and garlic.

Ajiaco is their national dish. At important events, Cubans enjoy this broth with pieces of squash, yucca and banana. Ajiaco may also have pork, corn-dough balls and jerky. Diners add chili and lime as a final touch.

Guava shells (cascos de guayaba) are among the most sought-after desserts. To prepare them, Cuban cooks wash, peel, halve and seed guavas, shaping them like shells. Then they cook the shells in boiling water and add sugar. Once the shells are soft, they drain them. Mixing the remaining syrup with white or cream cheese, cooks get the perfect filling for the shells.

“Cuba has an important influence on [international] gastronomy. One of their main dishes is rice with beans, a traditional Cuban stew, or ropa vieja. Not to mention its ‘mixology’ in beverages,” said Fernando Lara Montalvo, a gastronomy graduate from the Mexican University, Veracruz campus.

One of Cuba’s most traditional drinks is Malta, which combines hops, barley, water and condensed milk. After their meals, Cubans might have a cortadito, a strong espresso with sugar that gives added energy to enjoy the island’s vibe.

But the king of Cuban drinks is the mojito. People all around the world enjoy it. Mexican bars serve it in a wink to the island.

“The mojito is one of the most sought-after Cuban drinks in restaurants and bars in our country,” said Lara Montalvo, who is Mexican.

Soak the beans in water for 12 hours. Drain and wash.

Wash and dice the bell peppers. Peel and chop garlic and onion.

In a saucepan, pour 1 quart of water. Add half the bell pepper, onion and garlic. Add the bay leaf and the beans already soaked and drained.

Cover the pot and bring it to a boil. Cook for 45 minutes over medium-low heat.

While the beans are cooking, fry the rest of the bell pepper, onion and garlic in a pan with olive oil. Once they are soft, add cumin, oregano and sweet paprika. Cook for 2 more minutes while stirring. Reserve.

Once the beans are fully cooked, add the vegetables to the pot and a pinch of salt. Cover again and continue cooking for another 30 minutes.

Add the vinegar and cook for 15 minutes more.

To make the rice, heat 2 cups of water with a pinch of salt and add the rice. Cook for 18 minutes.

Serve the beans with freshly made rice. One can accompany the dish with fried plantain.