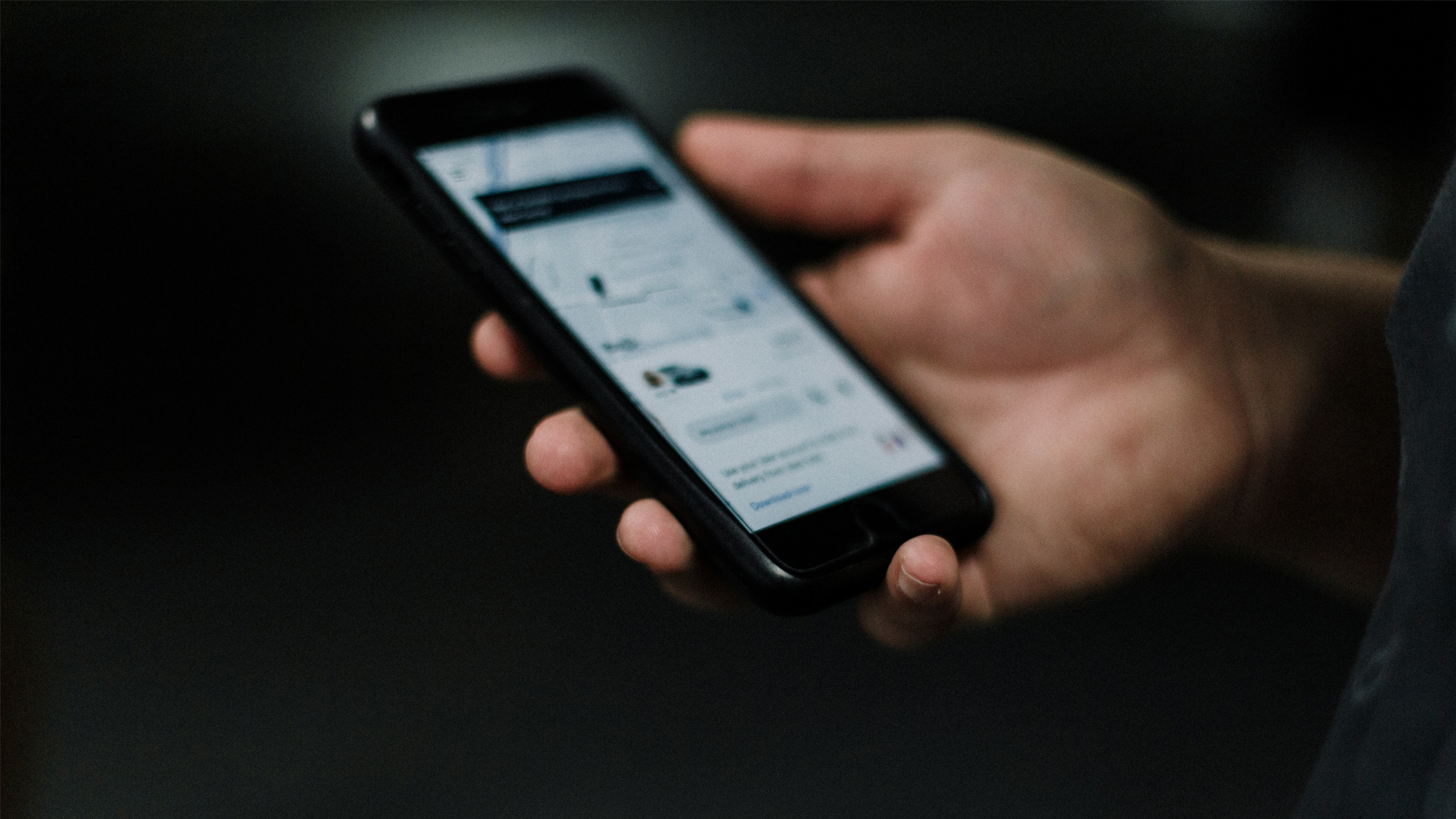 A person using Uber on his phone. (Priscilla Du Preez/Unsplash)

PUNE, India — Neradi Srikanth, a 22-year-old driver with Uber who has completed over 1,400 trips and has a  4.67-star rating on the platform, was blocked out of his account in February.

Hoping for a better future and more earnings, Srikanth visited Tirupati, a city in the southern Indian state of Andhra Pradesh, and got tonsured as part of a religious ritual. But his hopes were dashed after the app refused to let him operate the account even after multiple tries. The ride-hailing firm’s partner app, which relies on facial recognition technology to ascertain drivers’ identities, could not recognize Srikanth’s altered look.

“On Feb. 27, at 7 PM, I tried to log in,” Srikanth, who hails from southern India’s Hyderabad city and has been with Uber for almost two years, told Zenger News. “When I couldn’t, I went to the Uber office. Since that day, they have been saying your selfie was not matching.”

The incident initially went unnoticed, but then social media stepped in.

Shaik Salauddin, the state president of Telangana Gig and Platform Workers Union, tweeted on March 31 about the occurrence, prompting Uber to tweet in response.

It has been over a month since Srikanth, a member of this union, got logged out of Uber. 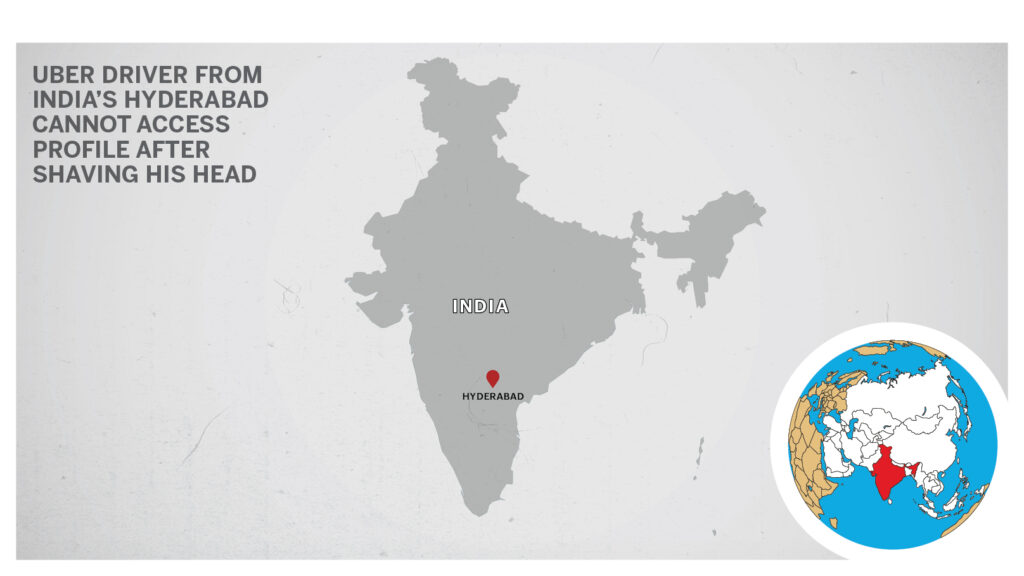 “Recently, they [Uber executives] said that your account is permanently blocked. An executive said, ‘your selfie is wrong. I cannot do anything; the technical team looks after this’. But nobody from Uber has contacted me,” Srikanth said.

Uber denied the account was blocked because of a glitch in its facial recognition technology.

“The driver in question did not lose access to the Uber app due to a change in physical appearance,” an Uber spokesperson said in an email.

“He had visited an Uber Partner Seva Kendra when he was unable to log in. We communicated to him that they removed access to the app due to violations of our community guidelines, which set the highest possible safety standards on our platform.”

The guidelines state Uber drivers can lose access for the use of inappropriate language, breaking the law, or physical contact with other riders, etc. Uber declined to clarify the community guideline Srikanth broke.

“Since the start of the pandemic, Ola and Uber have asked drivers to take a selfie each time they log in,” Salauddin told Zenger News. “Uber called me this week and said they would give feedback after an hour. But we didn’t get any updates.”

“We need to have a campaign now. We will write to the Prime Minister, Chief Minister, and the concerned transport and labor ministers. We need to take data from each state about how many drivers were blocked for various reasons,” he said.

The incident questions the accuracy and drawbacks of facial recognition technology.

Uber, which announced its selfie-powered real-time ID check in India in 2017, claimed to have a 99 percent accuracy rate in its pilot program. The driver security feature uses the Face API, a part of Microsoft Cognitive Services.

“Accuracy is a contingent term in this technology,” Divij Joshi, an independent researcher, and lawyer told Zenger News. “Most of these use Machine Learning, which means you feed a bunch of data into them, and it detects a pattern in the data and uses that to conduct analysis.”

Joshi was a Mozilla Technology policy fellow for 2019-2020 and created the artificial intelligence observatory.

Research studies state that state facial analysis tends to be less accurate for people with darker skin tones. In June 2020, Microsoft stopped selling its facial recognition software to the police forces in the U.S. after the Black Lives Matter protests.

“It’s a form of statistics that a face is likely to be x, y, or z,” Joshi said. “In this case, it’s built on several thousand parameters of data, like the space between your nose or eyes, what your hairline is like, all that’s mapped in.”

“In a lot of cases, the underlying training data is not very representative. For example, when you frame an algorithm based on a particular kind of population, the algorithm is better performing on that population and less likely to perform well on a population that doesn’t have similar features.”

Uber says the technology the firm uses can detect changes in physical appearance.

“Uber’s facial comparison tool helps ensure that only the registered driver is using the account,” an Uber spokesperson said. “It is capable of detecting natural changes in a person’s appearance such as long or cropped hair. In case drivers face a problem logging in due to any technical issue with the selfie verification process, they have the option to visit the nearest Uber Partner Seva Kendra for a manual review of their profile.”

Joshi said facial recognition technology essentially creates a digital map of one’s face by locating different points on the face, converting that into a digital file, and then matching that to a pre-collected database of digitally mapped faces.

Facial recognition software uses 1-to-1 matching, 1-to-n matching, and n-to-n matching. Uber uses 1-to-1 matching. Corporations use it to ensure the attendance of workers, where you are searched for the file or image against your name. Drivers provide photos to Uber, which is converted into a digital map using facial recognition technology. Then it matches a live photo or selfie when trying to log in against the pre-existing database.

“Slightly more concerning is 1-to-n, where you take a face and match it against any database, to see where else this person has appeared on the database. The objective is to identify people amongst the crowd, and for n-to-n, you can match multiple people to multiple databases,” Joshi said.

Governments use 1-to-n and n-to-n mapping for law enforcement and surveillance purposes. This highlights India’s lack of a personal data protection law. Though India’s Personal Data Protection Bill was introduced in Parliament in 2019, it is not a law yet.

“There is no law that regulates facial recognition technology in India. There is no wider data protection law in place,” Anushka Jain, associate counsel at digital rights advocacy non-profit group Internet Freedom Foundation, told Zenger News. “There is only the Puttuswamy judgment, which lays out the right to privacy.”

“The Personal Data Protection Bill is also problematic. It gives wide exemptions to the government on how data is collected and how government parties are liable. The surveillance laws in India are extremely lacking. Even if the Bill is enacted, it won’t be able to respond to the facial recognition technology systems put into place,” Jain said.

The Internet Freedom Foundation’s Panoptic tracker records facial recognition systems in India and is split state-wise. There are 48 facial recognition technology systems installed across the central and state governments, with an estimated financial spend of INR 1,247.8 crore ($167.5 million), as per the project.

“Most updated privacy legislation around the world deal with biometric information and regulate its use. The General Data Protection Regulation (GDPR) in EU, or the Chilean and Brazilian data protection law considers this very personal data, and it’s very invasive to part with it for attendance,” Joshi said.

“In some cases, such as GDPR, there is a requirement where if a system or algorithm that applies to you has no human oversight, then you have the right to oppose and object to that. The problem, of course, is there are many exemptions and loopholes for employers because it’s assumed that they need this kind of information. There are very few outright bans on facial recognition technology,” Joshi said.