“When they touched the ground, they ate all the vegetation that was pasture, leaving our livestock starved,” one herder said. 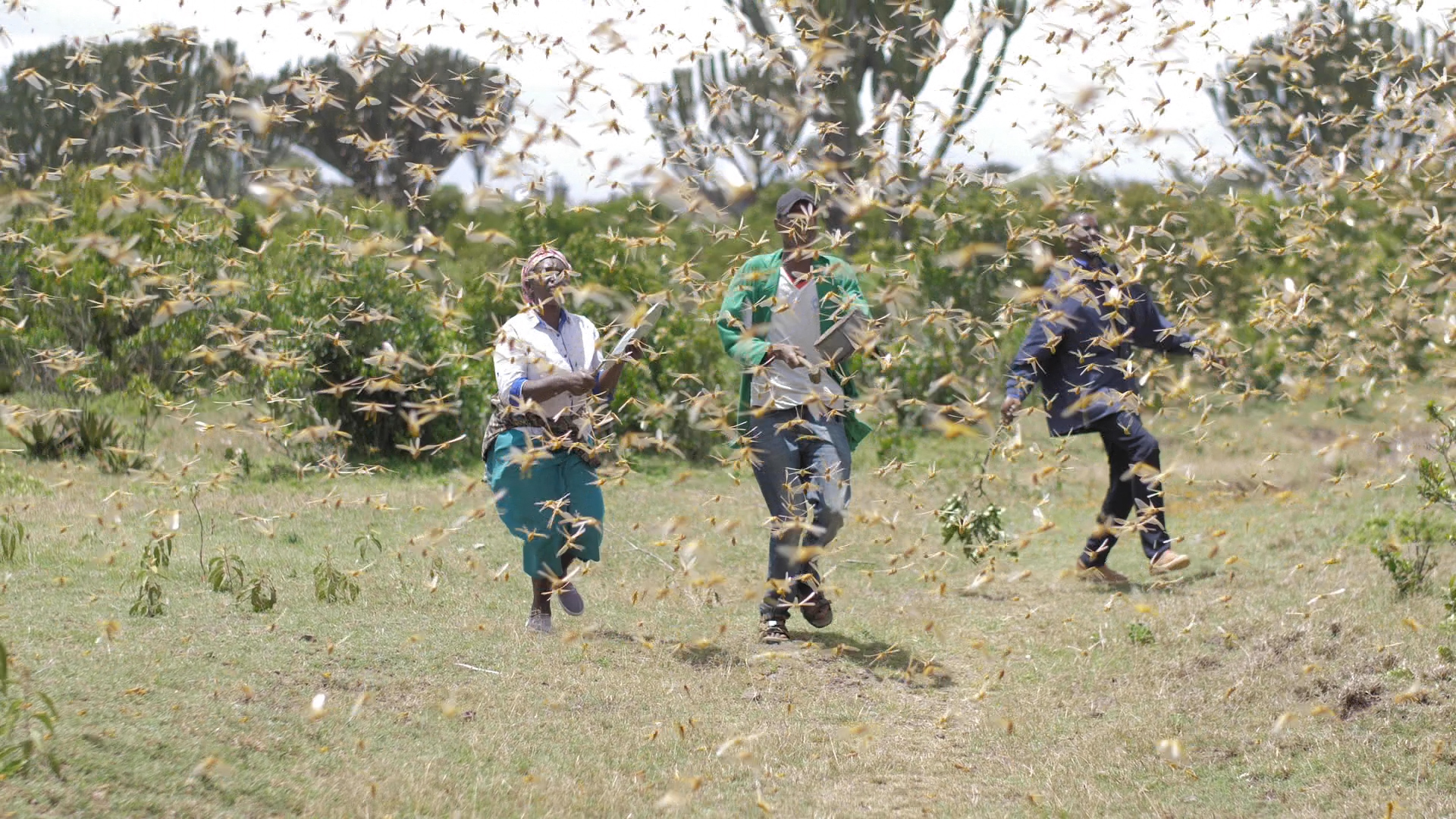 Members of one community try to scare away locusts after the swarm invaded their farms. (Charles Karis)

For more than a year, swarms of locusts in Kenya’s arid and semi-arid north have threatened the livelihood of crop and livestock farmers already suffering during an ongoing drought.

Locust swarms tore across more than one-quarter of the country’s 47 counties, destroying vegetation in pastures, as well as crops.

“When they landed on the trees, they started eating the leaves, and it didn’t worry us. But when they touched the ground, they ate all the vegetation that was pasture, leaving our livestock starved,” Remungezi, a herder in Marsabit, a county that borders Ethiopia to the north, told Zenger News.

Like some of his fellow herders, Remungezi had to sell livestock, so he could buy medicine to save his other animals, which had developed health complications after grazing in fields where the locusts had laid eggs.

During the first wave of the locust invasion, the government, the Food and Agriculture Organization of the United Nations, known as FAO, and faith-based organizations joined in efforts to control the invasion amid the COVID-19 restrictions.

Combined with a significant economic downturn during the pandemic, the locust invasion — the worst in East Africa in a quarter-century — poses an unprecedented threat to food security.

“Depleted pasture is a big concern for the humanitarian partners working in arid counties, such as Marsabit. Competition over pasture has been one of the main causes of conflict among pastoralists,” Felix Musonyi, emergency coordinator at World Vision, a Christian humanitarian organization, told Zenger news.

Already, more than 31 million people are facing some degree of hunger due to drought, sporadic flooding and conflict in East Africa, according to FAO.

The locusts began swarming into East Africa in mid-2019, one of the wettest years, which provided thriving conditions for their reproduction. The insects made landfall after being carried by the winds across the Red Sea.

“We had our first swarm of locusts toward the end of December 2019, which came through Moyale and North Horr, affecting croplands, pasture areas and the browsers in totality,” said Hassan Charfi, deputy director of agriculture for Marsabit county. “They will cause feed and food insecurity in totality in our county.”

“Lack of pasture for the animals means less milk for the family,” said Remungezi. “I have had to sell goats for me to buy milk for my children.” He said that his biggest worry is starvation and malnutrition for the children in the region.

The FAO said widespread rains in late March 2020 allowed the new swarms to mostly stay in place, mature and lay eggs. Some groups of locusts moved from Kenya to Uganda, South Sudan and Ethiopia.

Professor Baldwyn Torto, principal scientist and head of the behavioral and chemical ecology unit at the  International Centre for Insect Physiology and Ecology, told Zenger News that regional and multi-institutional coordinated efforts to reduce the risk of locust invasions is key to curbing the devastation.

“The relevant stakeholders need to work closely with scientists to identify breeding sites and act as quick as possible to control juveniles as they emerge,” said Torto.

Last year the desert locusts in Kenya were described as the worst swarm in 70 years.

According to the FAO, “A 1 km² size swarm contains about 40 million locusts, which eat the same amount of food in one day as about 35,000 people, 20 camels or six elephants.”