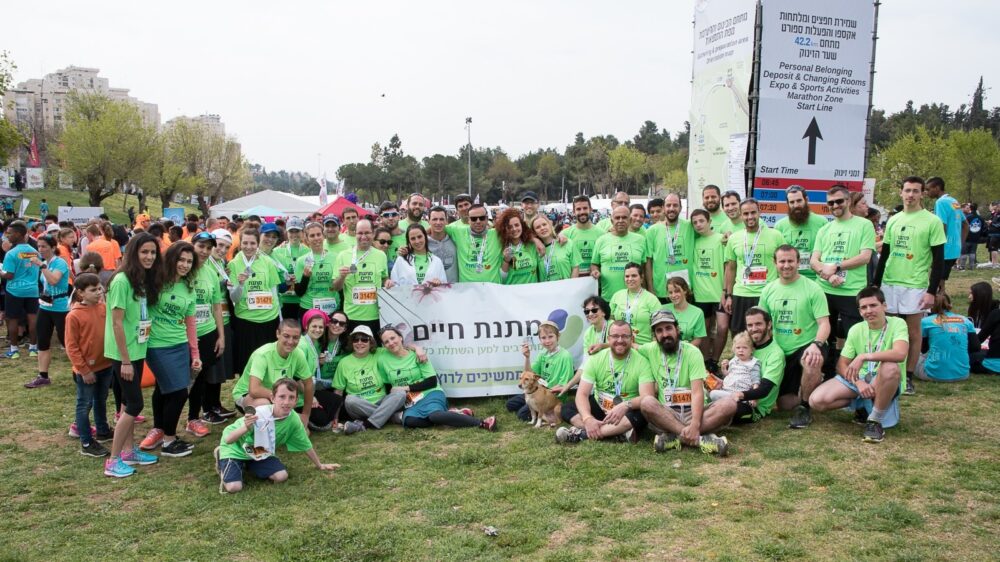 As of April 4, the nonprofit Matnat Chaim (Gift of Life) had facilitated 1,003 live kidney transplants since 2009 from altruistic donors — people who are not related to their recipients.

“That figure is somewhat anecdotal because in many countries altruistic kidney donation doesn’t exist, and in some it’s only beginning to be documented,” Singer said.

“Israeli transplant surgeons go to international conferences and tell us their colleagues from other countries say their numbers don’t come close.”

China, for example, has about six times as many live kidney transplants as Israel but much more than six times the population — 1.4 billion compared to 9.2 million.

The UK, with a population of 60 million, recorded 130 altruistic transplants during an eight-year period when Israel’s number topped 500.

On April 4, four altruistic kidney transplants were performed in Israeli hospitals through the efforts of Matnat Chaim, pushing the number above 1,000 in 11 years.

And that does not include voluntary altruistic kidney donations arranged through private channels.

Born out of tragedy

Matnat Chaim was founded by Rabbi Yeshayahu Heber. When he was a dialysis patient before receiving a kidney donation, he befriended a young man who died while waiting for a matching donor.

Determined that such a tragedy would not happen again, Heber began recruiting voluntary kidney donors from his own ultra-Orthodox (haredi) circles to match with potential recipients, subject to strict medical protocols.

Partly because of this focus, about 90 percent of the altruistic kidney donors in Israel are Orthodox or ultra-Orthodox.

Singer said that in the past three years, Matnat Chaim has started using digital media to reach the secular population. Though the number is still small, the rate of non-religious donors has more than doubled in that time.

“We are finding that the more we raise awareness in secular communities the more people are becoming interested.”

“Since Matnat Chaim started operating in 2009, there’s been an almost 400 percent increase in living kidney transplants in Israel,” Singer said.

“Interestingly, about 40 percent of our kidney donors are educators,” said Singer. “More people from small communities than from big cities donate but Jerusalem has the largest number of donors than any other municipality.”

More than 95 percent of live transplants are successful. Some 80 percent of recipients survive for five years and approximately half survive for more than 25 years.

About two-thirds of altruistic donors in Israel are male; Singer said that’s because Israeli doctors discourage women from donating until they are finished bearing children.

“We believe the distribution will even out in about a decade because there’s half a generation of women between 25 and 40 interested in donating once they pass their childbearing years.”

During 2020, despite the pandemic, Matnat Chaim saw a 30 percent increase in altruistic donations over 2019. Singer said that many people decided to give the gift of life in memory of Rabbi Heber, who died of COVID-19 last April at age 55.