The Dragon Connection: Why India Abstained From UN Vote Against Sri Lanka

Move towards building bridges to counter growing influence from China. 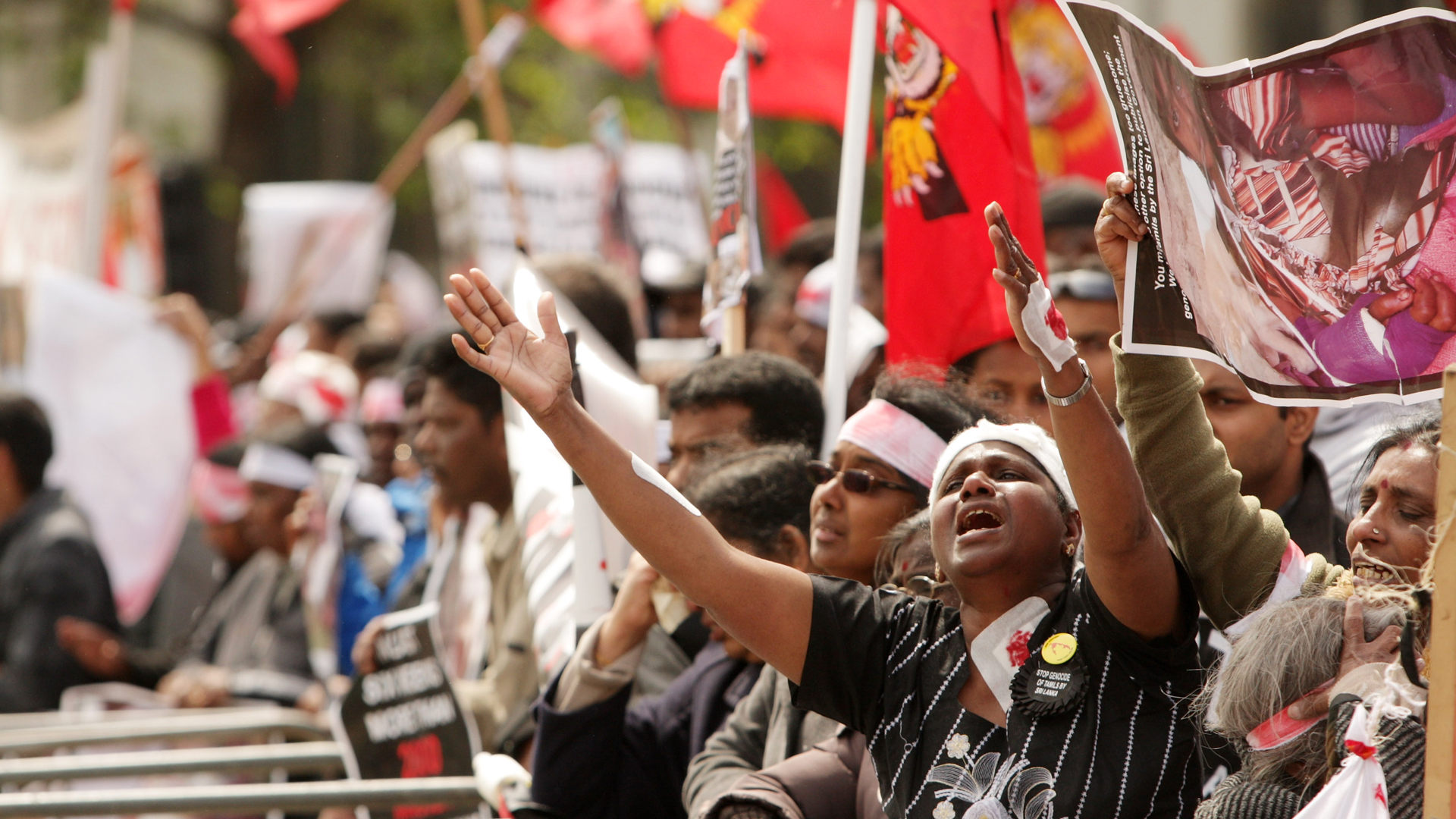 CHENNAI, India — In a bid to strengthen its diplomatic ties with Sri Lanka and maintain its presence in the Indian Ocean Region, India has abstained from voting on a resolution during the United Nations Human Rights Council’s 46th regular session in Geneva that aimed to probe further into the war crimes committed during the Sri Lankan civil war.

Sri Lanka witnessed an almost four-decade-long civil war (1983 to 2009) between the Tamil population, led by the Liberation of Tamil Tigers Eelam, and the Sinhalese government. The Liberation Tigers of Tamil Eelam sought to establish an independent state, Eelam, in northern and eastern Sri Lanka.

“Two fundamental considerations guide India’s approach to the question of human rights in Sri Lanka,” read India’s official statement before the vote. “One is our support to the Tamils of Sri Lanka for equality, justice, dignity, and peace. The other is in ensuring the unity, stability, and territorial integrity of Sri Lanka.”

“We have always believed that these two goals are mutually supportive, and Sri Lanka’s progress is best assured by simultaneously addressing both objectives,” it said.

A recent UN report has warned that the failure of Sri Lanka to address past violations has “significantly heightened the risk of human rights violations being repeated”. 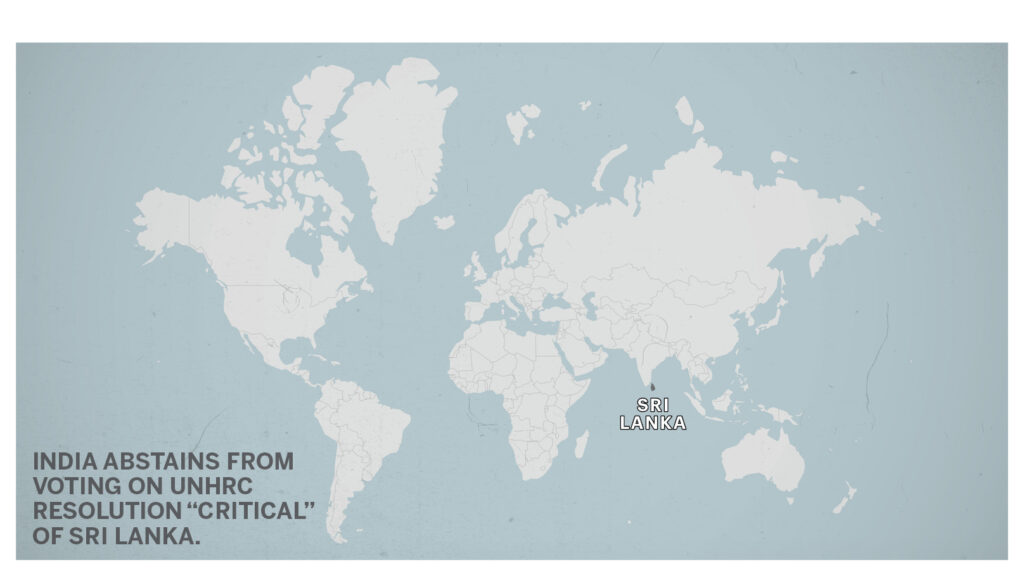 “It highlights worrying trends over the past year, such as deepening impunity, increasing militarization of governmental functions, ethno-nationalist rhetoric, and intimidation of civil society,” the report states.

Despite India’s abstention from the vote, the resolution — which focuses on setting up a central database to collect and preserve evidence of human rights violations for future accountability — was approved by 22 in favor, 11 against, and 14 abstentions. China, Pakistan, and Bangladesh voted against it.

Sri Lanka rejected the vote, terming it “politically motivated and an intrusion into their internal matters”.

This was the second time India abstained from voting against its island neighbor after 2014. India has voted in favor of resolutions critical of Sri Lanka in 2009, 2012, and 2013. Since 2009, there have been eight resolutions on Sri Lanka at the UN Human Rights Council, with the last in March 2021.

While some see this as India’s diplomacy to counter China’s presence in the region and its preference to maintain peace, some observers back home are not happy.

“Obviously, India does not want to position itself in an adversarial role vis-a-vis Sri Lanka as it does not want to drive its neighbors closer into the Chinese embrace. It feels that it can better help the Tamil population by a positive engagement with Sri Lanka,” Hooda, who oversaw the 2016 surgical strikes at the Line of Control, said.

“Also, India has had its issues with the UN Human Rights Commissioner over Kashmir and recently on the issue of farmers’ protest. India feels that there is an overreach by the Office of the United Nations High Commissioner for Human Rights that amounts to interference in the country’s internal affairs. India would have found it difficult to support a resolution that enables the commissioner to investigate human rights cases in Sri Lanka,” Hooda said.

However, Tamil Nadu’s ruling party’s founder member had his point to make.

“Both Congress and the Bharatiya Janata Party [the two national political parties of India] are always against the welfare of Tamils, so it was not surprising at all,” Trichy K. Soundararajan, a former member of the legislative assembly and founding member of All India Anna Dravida Munnetra Kazhagam, told Zenger News.

“It is only at the time of elections that people see what is happening around them with political parties also raking up the Tamil issue for their benefit,” he said.

The China threat — Geopolitical or Geo-economical?

Historically, India has had good trading and cultural relationship with Sri Lanka. The relations took a backseat during India’s role in the peacekeeping operations in Sri Lanka and the assassination of India’s then prime minister Rajiv Gandhi in 1991.

Despite these, India is one of Sri Lanka’s largest trading partners in the South Asian Association for Regional Cooperation (SAARC), with exports from India in 2018 alone touching $4.16 billion.

But the preferred trading partner tag is now being taken over by China. Sri Lanka has fallen into a debt trap and, as per 2018 numbers, the Island nation had a total external public debt of $34.7 billion. China held 5 percent of the external public debt as of 2018, followed by Japan at 3.4 percent.

“China is not a military superpower but is an economic superpower,” Thirumurugan Gandhi, Indian human rights activist and geopolitical commentator, told Zenger News. He is noted for founding the May 17 Civil Rights Movement, a tribute to Liberation Tigers of Tamil Eelam founder and leader Velupillai Prabhakaran.

China has the capability to wage attacks in multiple locations, as seen in Arunachal Pradesh and Ladakh in India. The Galwan Valley attacks led to diplomatic breakdowns between India and China that are now being restored. In retaliation, India shut down over 200 Chinese apps, issued a blanket ban on Chinese imports, and canceled tenders of Chinese companies.

“China pushed its way into Sri Lanka as it is advantageous for them. If they have other intentions, such as emerging as a threat to India [by] utilizing Sri Lanka’s ports, for example, it will be clear in the long run. For now, it is not so.”

Sri Lanka’s proximity to China has increased over the years, with the latter pumping money for infrastructure and port construction.

London-based Chatham House, an independent policy institute, in their report states, China’s ambitious Belt and Road Initiative led to the acquisition of the Hambantota Port, a coal-fired Norocholai power station, the Mattala Rajapaksa International Airport, Colombo International Container Terminals, and the Colombo Lotus Tower. It has been guesstimated, investments of over $15 billion have been pumped into Sri Lanka by China till 2018.

Last month, Sri Lanka announced it would fully operate the Colombo Port’s Eastern Container Terminal under the Sri Lanka Ports Authority. The announcement was a deviation from the trilateral pact signed by India, Japan, and Sri Lanka in 2019, under which India and Japan were to develop the terminal.

Further, last year, ministers from the Sri Lankan Rajapaksa government called for the scrapping of the 13th Amendment, which devolves power to provincial councils as per the 1987 India-Sri Lanka accord. The 13th Amendment had agreed to empower nine provinces in Sri Lanka. This move has not taken off despite reminders from the succeeding governments of India.

Commenting on India’s stand on the 13th Amendment, Hooda said, “There is no change in the Indian position, and it will continue to encourage Sri Lanka to implement it.”

“Developing harbors and ports is crucial for them, and Sri Lanka’s strategic location makes it an ideal investment. Sri Lanka has always maintained China is a strategic investor when building infrastructure, transportation, and energy. There is nothing to speculate in this matter.”

The response from the Indian Tamils

Tamils in Sri Lanka suffered deeply at the hands of the warring parties during the civil war. It is estimated that between 40,000 and 100,000 Tamil Sri Lankans were killed and hundreds of thousands displaced. Almost 12 years after the war ended, the community is still looking for justice and reparations.

The Tamils in the southern Indian state of Tamil Nadu are supporters of the Eelam movement. With refugees coming into Tamil Nadu in the thousands, there was an uproar in Tamil Nadu against the Sri Lanka government’s actions. The Indian Tamils demanded strict action from India, which forced the Indian government to intervene in the war through its peacekeeping operations.

Organizations such as the May 17 Movement and Journalists for Democracy in Sri Lanka have filed petitions in the UN Human Rights Council and other international forums demanding justice for the Tamils in Sri Lanka.

“Promises were made by former prime ministers to support the Tamils in Sri Lanka. There were promises made to even grant citizenship to them, and yet they are in camps. March 23 is a black day as India abstained from voting against Sri Lanka,” said Gandhi.

But Malini Saba, founder and chairman, Saba Group & Anannke Foundation, believes “it is both in India’s and Sri Lanka’s interest to get a full and final closure on these allegations of war crimes and the killings.”

“Not getting the closure will allow the wounds to fester. We should let everyone heal and the nations move forward. Most of us who raise noises are never truly living in the nation. We never want to go back there.”