VIDEO: What’s Not To Lick? Rescue Tiger At Peace In The Refuge That Saved Joe Exotic Big Cats

Contented cat curls up at his new home with his brother. 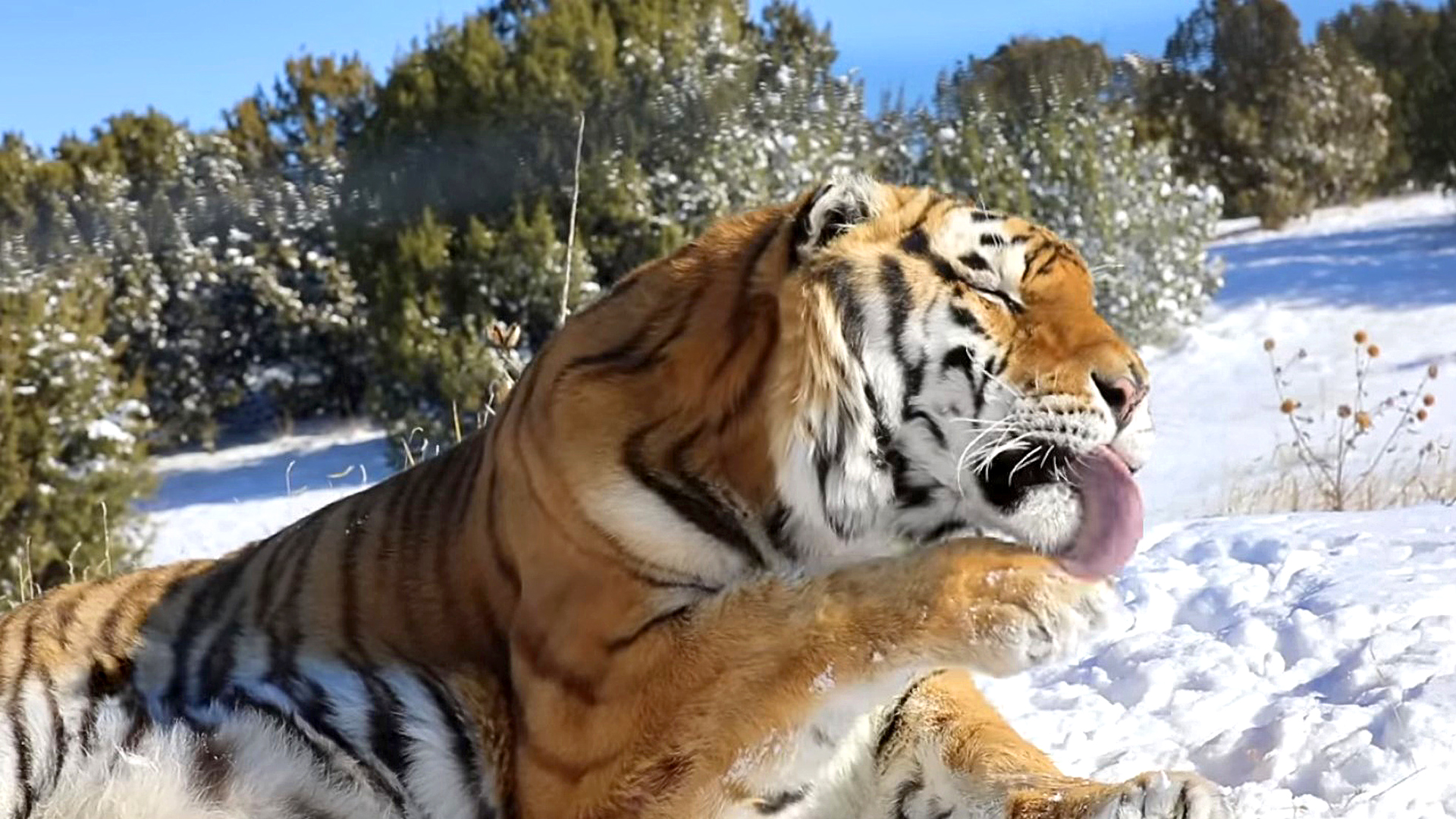 Lying in a sunny spot on the snow, Budahshay licks his giant paw thoroughly and then rubs it on his face. (TheWildAnimalSanctuary/Newsflash)

COLORADO CITY, Texas — A rescued tiger took a break to groom himself after a hearty meal at a wildlife sanctuary in Colorado dedicated to saving big cats from Joe Exotic.

The video with the huge tiger was taken in the Town of Keenesburg, Colorado, and posted by The Wild Animal Sanctuary. As shown in the footage, the tiger, named Budahshay, is having a grooming session while lying in the snow just after his delicious breakfast.

Lying in a sunny spot on the snow, Budahshay licks his giant paw thoroughly and then rubs it on his face. The wild cat seems to be enjoying himself.

“Budahshay, along with his brother, Bailey, were part of 24 animals suffering from declining care at an animal rescue facility in Spearfish, South Dakota, since they were cubs,” said the Wild Animal Sanctuary. “That facility accepted both domestic and exotic animals, so it started suffering from overcrowding and mismanagement.”

Now Budahshay, his brother, and many other majestic cats live lives of relative freedom on 35 acres of forested habitat at The Wild Animal Refuge and never have to worry about starving or having enough food again, the center said.

They said that they are “home to more than 600 residents” and that these include “tigers, Mountain lions, African lions, Black bears, Grizzly bears, wolves, leopards, hyenas, bobcats, African servals, lynxes, foxes, coyotes, Coati Mundi, wallabies and kangaroos, raccoons, emus and ostriches, camels, yaks, alpacas, horses and donkeys, and dogs and cats” that they have rescued.

The number of rescued wildlife is over 70.

So far, the sanctuary has saved 91 animals from the stars of the Netflix series “Tiger King.” They strongly disagree with the lifestyle of the “so-called” star of the series, Joe Exotic. The sanctuary is determined to rescue even more animals from the hands of these exploiters.

They explained, “we believe there are many ways to save the animals.”

As well as donations, which they also accept in cryptocurrency and sponsors, the sanctuary said it is open to volunteering, internships, celebrity endorsements, adoptions, fundraisers, promotions, vehicle donations, and scouting projects.

Tigers are the largest living wild cat species and members of the genus Panthera. Particularly in countries with a high population, they are also victims of human-wildlife conflict and are listed as endangered on the International Union for Conservation of Nature Red List.

As per reports by World Wildlife Fund, there are approximately 5,000 captive tigers in the US, more than the roughly 3,900 remaining in the wild. A vast majority of these captive tigers are privately owned and living in people’s backyards, roadside attractions, and private breeding facilities.

“Only an estimated 6% of the US captive tiger population resides in zoos and other facilities accredited by the Association of Zoos and Aquariums. Many of these private tiger owners aren’t properly trained to care for wild animals, making the animals vulnerable to mistreatment and exploitation,” states the report.

«Previous Post
VIDEO: Women’s Police Stations Help Prevent Violence Against Women, So Why Are They Not Everywhere?»Next Post
VIDEO: Not So Grizzly: Bears With A Spring On Their Step After Winter Snooze