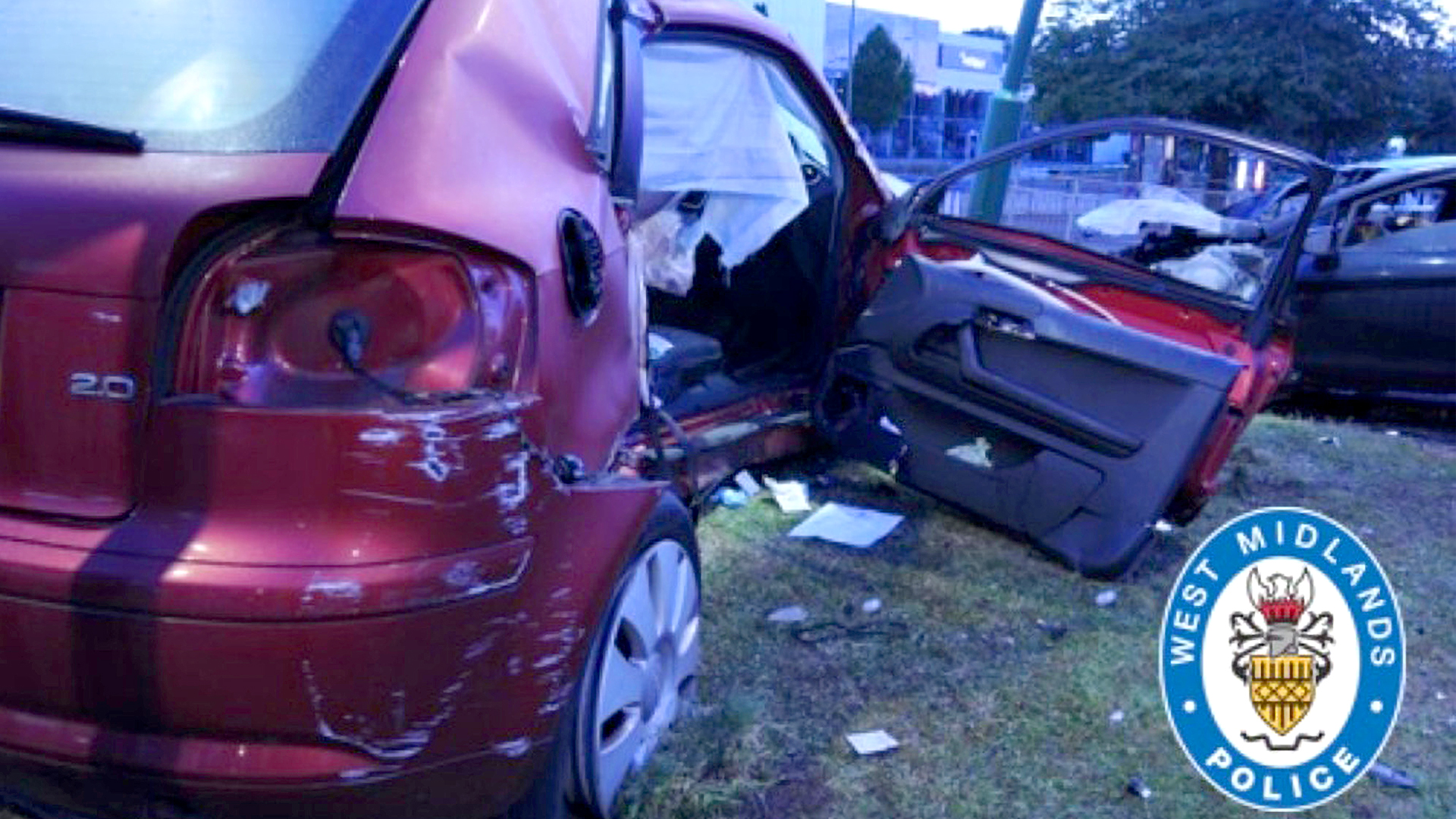 Moment after the horrifying collision caused by three young street-racers who drove at speeds double the limit. (West Midlands Police/Newsflash)

SHIRLEY, England — This is the shocking moment when a street racer crashes into a 60-year-old motorist at high speed in the U.K., leaving him permanently injured.

The West Midlands Police Department released the footage of the accident captured by street surveillance cameras in the town of Shirley on March 26.

Four people were jailed in connection with the crash, which occurred in the Metropolitan Borough of Solihull in West Midlands on July 18, 2019. The footage shows one of the racers driving at 75mph in a 30mph zone.

“These young men were egging each other a long while driving recklessly,” said PC Anneka Morgan from the West Midlands PD serious collision investigation unit. “Though there was only one car involved in the physical collision, we’ve been able to prove that their joint actions meant they were all culpable.”

Morgan said the accident left an innocent man with horrific injuries from which he will never wholly recover and believes the sentences send a clear message that competitive racing is not acceptable.

“It’s dangerous and has devastating consequences. What these youngsters naively saw as fun led to severe repercussions. Our message is clear: driving like this is dangerous and illegal,” she said,

During the incident, the reckless driver crashed into the side of another car, traveling slowly around the roundabout.

The 60-year-old male motorist, whose name was not disclosed, suffered multiple injuries and underwent several operations to save his life. However, he will never make a full recovery, as per the police.An extensive investigation led officers to three young men responsible for the accident.

The trio was identified as 18-year-old James Walters, involved in the crash, along with 18-year-old Jack Coyne and 23-year-old Daniel Tandy, who followed behind him.

The police said all three pleaded guilty to causing serious injury by dangerous driving. James Walters and Daniel Tandy were jailed for 18 months and 20 months, respectively, for causing severe damage by hazardous driving. Jack Coyne was jailed for three years for the same offense and several other offenses, including aggravated and attempted theft.

A fourth defendant, identified as 19-year-old Morgan Cotterill, was sentenced to six months in prison for perverting the course of justice after she attempted to cover up one of the drivers’ identities.

Rash driving is a menace in the U.K., with many road accident cases registered daily.