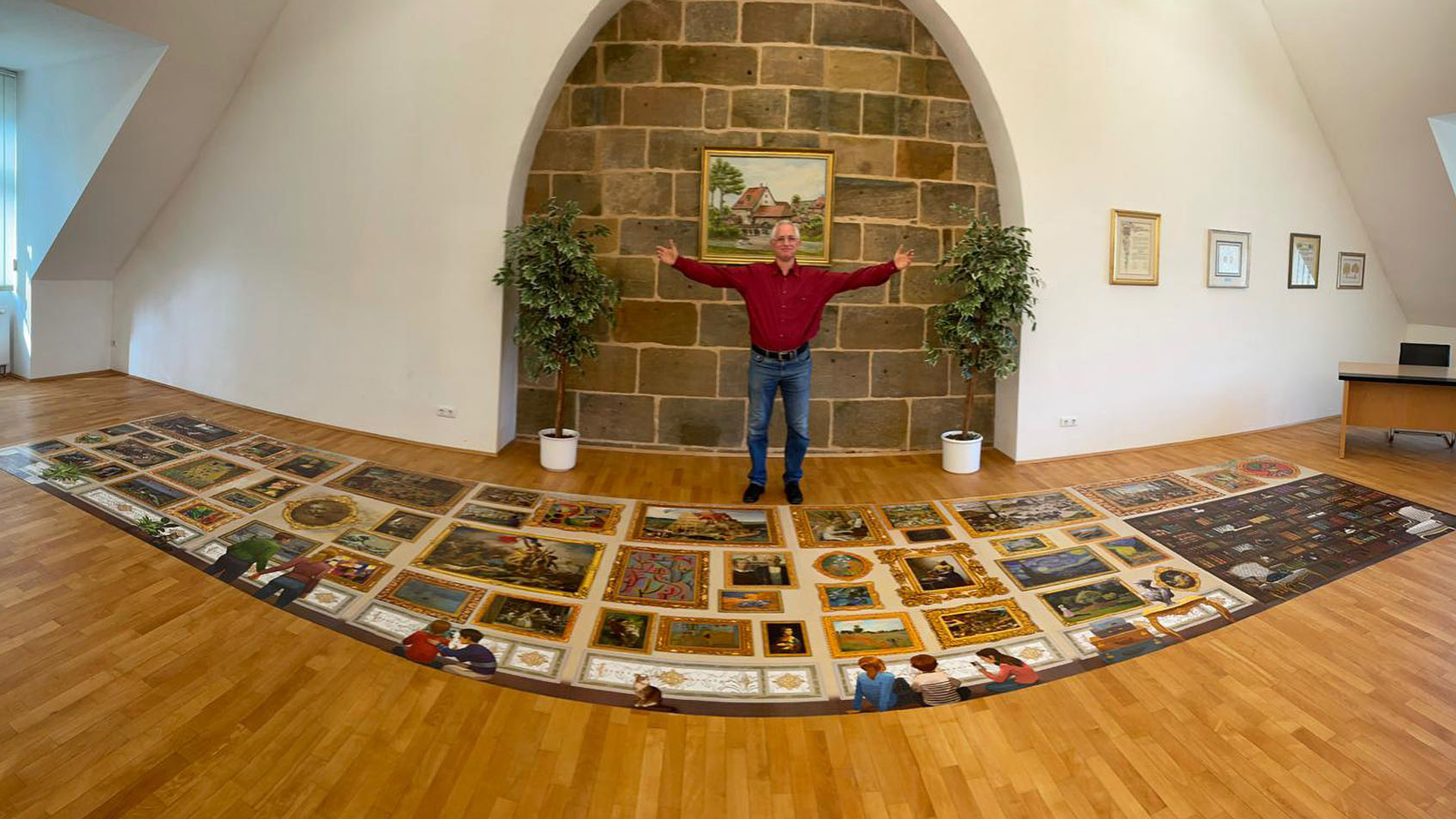 SALZGITTER, Germany — The German ‘Puzzle King’ who was missing the very last piece to complete a 54,000-piece jigsaw has finally hit his target after the manufacturer sent him the remaining part. The 54,000-piece jigsaw is said to be the world’s most giant puzzle.

Peter Schubert, 52, from Hallerndorf, a municipality in the Upper Franconian district of Forchheim in the southern German state of Bavaria, told Zenger News in an exclusive interview that the missing piece from the 18-square-meter puzzle had arrived and is already firmly in place.

The enthusiast, who considers himself a true puzzle devotee and a very patient man, something that, according to him, is essential when solving puzzles with thousands of pieces, could not believe his dream became true.

“It feels good. I could give everyone a giant hug. I still cannot believe what’s happening. It is indescribable! A couple of weeks ago, I was sitting all puzzled, confused, and working on the jigsaw night and day,” Schubert said.He is thrilled by all the public attention he has received thanks to news articles in the international media lately, confessing that he enjoys it.

Schubert explained how his fascination with puzzles began 17 years ago when he came across a multi-thousand-piece puzzle in a bookstore, “I saw something that would go on to take my whole life in a completely new direction. A 20,000-piece jigsaw in a huge box!”

Despite his initial internal dilemmas on whether to buy the 6-square-meter puzzle (64-square-foot), he was tempted by the idea of solving it and returned to the book store the following day to buy it.

“Even today, I can still hear the laughter of the saleswoman who said, ‘finally, it is gone, and now we have more space on the shelf again!” Schubert laughed.

Schubert admitted he struggled with the puzzle, the largest one on the market back then, “The frame alone had over 3,000 identical pieces in uniform beige!”

His jigsaw portfolio includes about 60 puzzles, including 3D, holographic (two mysteries in one), and miniature jigsaws. His collection of ‘conquered’ puzzles ranges from 18,000-piece ones to the one he has just finished, Grafika’s ‘Travel Around Art’, a 54,000-piece jigsaw.

Grafika, the company behind the 54,000-piece jigsaw, was established in 2013 in France, and their 6,000-square-metre (64,583-square-foot) production warehouse is located on the border between France and Germany to ensure low EU delivery costs. Ever since its inception, the company has had a turnover of EUR 11 Million for 30 employees.

The ‘Travel Around Art’ jigsaw is delivered to 26 countries worldwide, and it is also available for sale in the US, Canada, and the UK. The manufacturer says it is the largest commercially sold puzzle in the world.

Eric Lathiere-Lavergne, the CEO of Grafika, said that they are keen to conserve their record of making the largest commercially sold puzzles globally and plan to release a new puzzle that is even bigger in less than three months.

Lavergne said that this “record is the pride and joy of our team, of our Grafika brand, and our company.”

Schubert said the puzzle was quite the challenge and added it took him four and a half months to complete it.

“I started by completing ten individual 1,000-piece parts of the overall puzzle and, as an athlete, trained my stamina, my eye for detail, and I made a plan for how I wanted to proceed,” he said.

However, after solving the puzzle, he was shocked to discover there was one piece missing. He even checked the vacuum cleaner, hoping to find it inside. He was finally left with no other option but to contact the manufacturer to send him the missing piece.

Now that he has finally accomplished his goal, he likes to focus on the future and possible business perspectives emerging from his hobby.

He said most people laughed when he discussed his vision of getting a career in the puzzle world and making a living through jigsaws, adding, “It is still such a great personal dream of mine. For about 15 years, I had an idea that I can also earn money with my hobby. Then I was lucky enough to have two of my giant puzzles on display in department stores with the help of an advertising agency to obtain possible customers, and at least I had proof it worked.”

He explained he partially managed to fulfill his ambitions, but unfortunately, the advertising agency he used to collaborate with closed its office. Despite efforts to find a new one, nobody has answered his requests or calls.

The ‘Puzzle King’, as he has been dubbed in Germany, works as a professional fitter in home decoration and construction and has a personal record of spending a whopping 15.5 hours on a puzzle in one day.

He stated that being single and having gone through a divorce 12 years ago helps him when it comes to organizing a schedule for solving a puzzle, “I invest 4 to 5 hours a day before and after my shift on weekdays, and I usually take a day during the weekend where I spend 14 hours on the puzzle.”

Schubert believes his life took a different turn when he started solving puzzles, and a lot of positive effects on his health and life have emerged from his hobby.

He said that he has finally received the missing piece and filled out the blank space in his 54,000-piece jigsaw. He is waiting for the Record Institute of Germany’s (RID) answer regarding his application.

«Previous Post
Chew-Rassic: Ancient Human Eaten 800,000 Years Ago By Cannibals Was A Girl, Reveal Experts»Next Post
VIDEO: Women’s Police Stations Help Prevent Violence Against Women, So Why Are They Not Everywhere?