The Bloom Of Tulips Pulls Tourists Back To Kashmir

Tourism gets a kickstart as Asia’s biggest tulip garden is thrown open, but some gardeners aren’t happy. 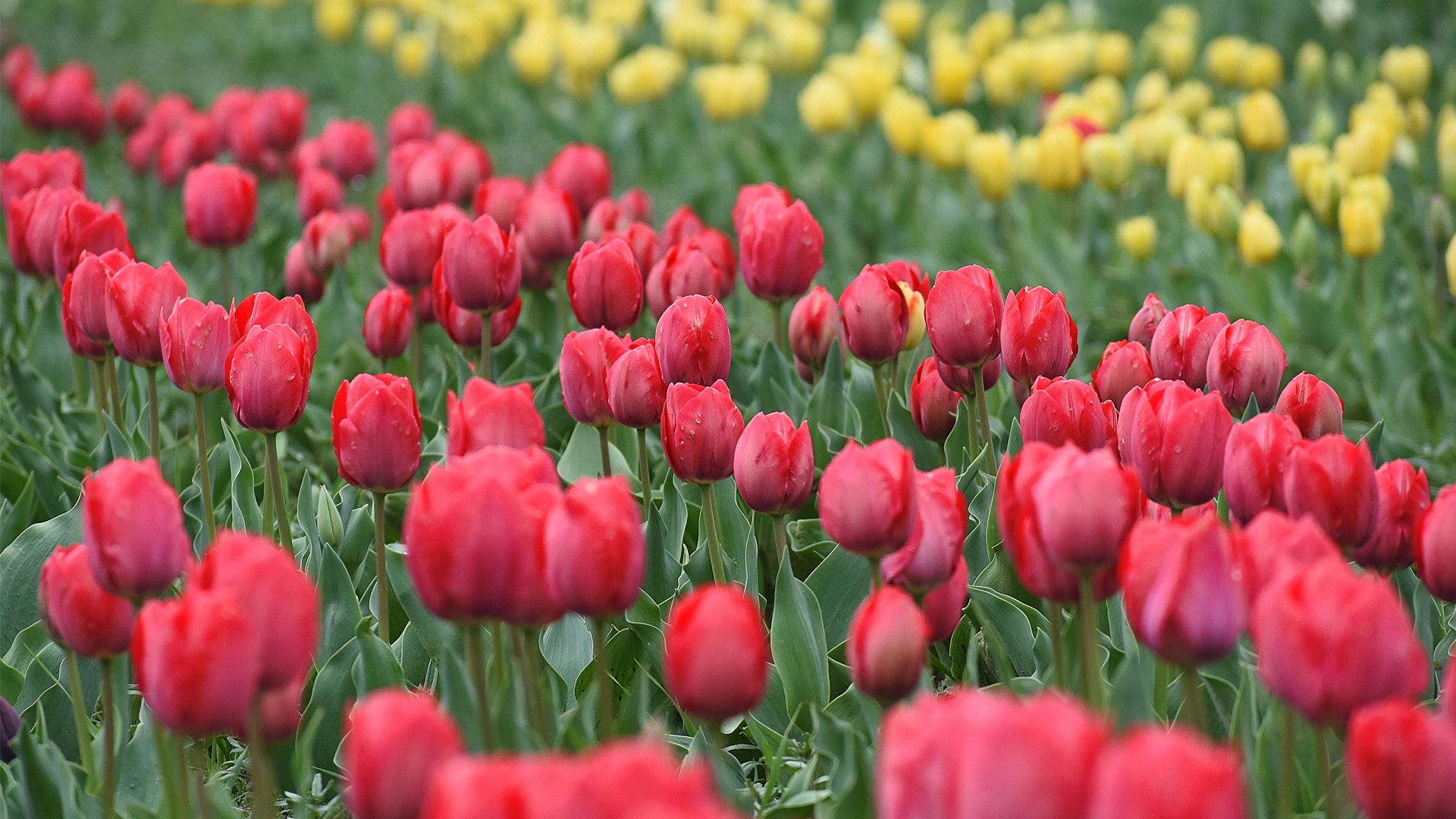 The men behind the grand show — around 140 gardeners — work round the year to make the flowers bloom at the Indira Gandhi Memorial Tulip Garden all at once. (Nusrat Sidiq)

KASHMIR, India — When 1.5 million tulips bloomed in Asia’s largest tulip garden last year, there was no one to appreciate their beauty, and they withered as the world was busy fighting a pandemic.

This year, the garden overlooking Kashmir’s iconic Dal (lake in the Kashmiri language) opened on March 25 — and visitors haven’t stopped coming ever since. 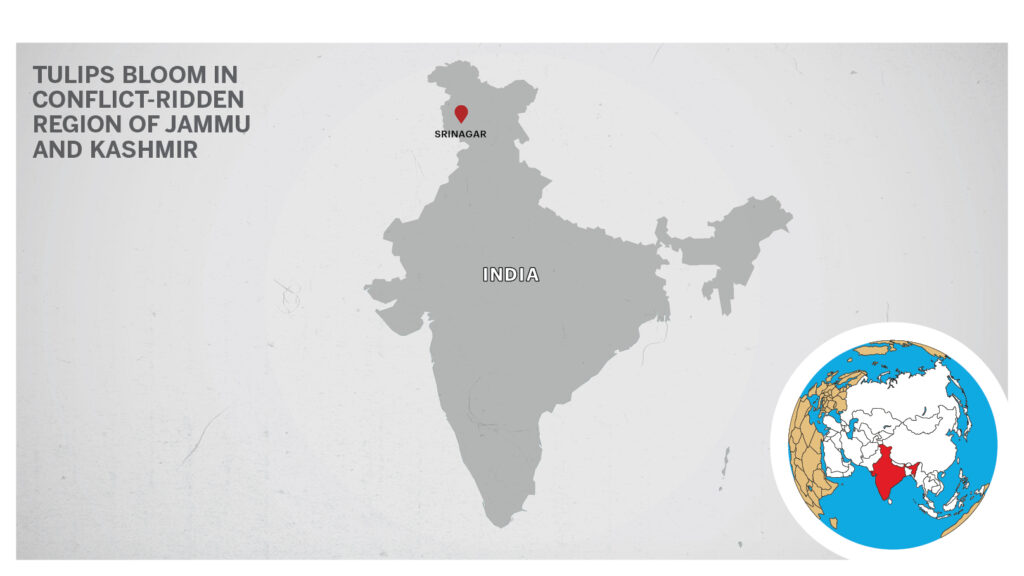 Estimates put the number of domestic and foreign tourists visiting the garden at 50,000 in the first week of opening — a good number considering tourism in the restive region remained frozen for more than two years. Last year due to the pandemic-induced lockdown and before that, due to the scrapping of the autonomy of Jammu and Kashmir.

Known as Indira Gandhi Memorial Tulip Garden, it is spread across 30 hectares in the foothills of the snow-clad Zabarwan Range in the city of Kashmir. A 30-minute drive from Srinagar, the capital city of Jammu and Kashmir, will take you there.

Inam Rehman Sofi, the caretaker of the garden, told Zenger News that this year, the  Department of Floriculture Kashmir has planted nearly 1.5 million tulip bulbs of around 62 varieties. Visitors will also find flowers such as Muscari (grape hyacinths), hyacinths, and daffodils.

Farooq Ahmad Rather, director of the Department of Floriculture Kashmir, told Zenger News that the department would add a cherry blossom garden for more beauty.

“The tulips in the garden have so far achieved a bloom of about 70 percent,” Sofi said. “In the coming few days, the garden will be in full bloom.”

The men behind the grand show — around 140 gardeners — work round the year to make the flowers bloom all at once. But some 60 casual gardeners aren’t a happy lot.

Mohammad Shafi, 47, is one of the 60 casual gardeners and has been working there for 14 years.

“Many of the casual gardeners have been toiling at the place for over 15 years but earn less than $120 per month,” Shafi told Zenger News. Permanent gardeners, meanwhile, earn about $545 per month.

Abdul Majid Dar, a 53-year-old permanent gardener who has been working in the garden for the past 28 years, agrees that many casual workers face hardships due to low wages.

“The government should understand the plight of casual workers,” Dar told Zenger News. “They have families as well, and working on a meager amount is not helping them at all.”

Another casual worker Ghulam Mohammad Bhat, 46, who has been working on the garden for the past 12 years, told Zenger News that nothing has been done despite raising the issue with the General Administration Department of the Jammu and Kashmir government many times.

Rather told Zenger News that the matter is “in the eyes of the government.”

“I understand that working for small amounts is not sufficient for them, but the decision [of paying more] lies with the government,” Rather said.

But these issues don’t stop the men from running the show year after year.

“We work the year-round for a one-month show,” Shafi said. “After the blooming ends, we begin preparations for next year’s show.”

A typical year looks like this for these gardeners. By mid-May, when the flowering season is over, they start to remove weeds around the tulips. In June, the bulbs are taken out manually, and this process goes on until July. In the next month, the land is tilled with the help of tractors.

In September, the gardeners start to give shape and pattern to the land, and this process continues until October. The garden is built on a sloping ground consisting of seven terraces.

In November, the stored bulbs are planted again with new ones, and this process continues for over a month. In the winter months until February, the focus is to ensure that snow doesn’t accumulate on the planted bulbs, which may harm them if left unattended.

In March, they give the finishing touches and remove any weeds. And soon, visitors come flocking.

This year’s job was tougher as the gardeners lost three months due to the lockdown announced in March 2020.

The garden, previously known as Siraj Bagh, was thrown open in 2008 by then chief minister Ghulam Nabi Azad to attract more visitors to Kashmir Valley.

Indian Prime Minister Narendra Modi recently posted pictures of the garden and urged people to visit. “Whenever you get the opportunity, do visit Jammu and Kashmir and witness the scenic tulip festival,” he tweeted. “In addition to the tulips, you will experience the warm hospitality of the people of Jammu and Kashmir.”

Sofi is hopeful this year will be good for the tourism sector. “On the first day itself, there was a huge rush of visitors,” he said.

Rekha Devi, a visitor from Indian Capital New Delhi, looked impressed despite having to wear face-covering due to Covid-19 protocols.

“I feel like I am in heaven,” she said. “Kashmir is truly a paradise, and this garden is magnificent.”