One of the vulnerable species, they often fall prey to the fishing nets.
By Ana Lacasa April 4, 2021
Facebook
Twitter
Linkedin
Email 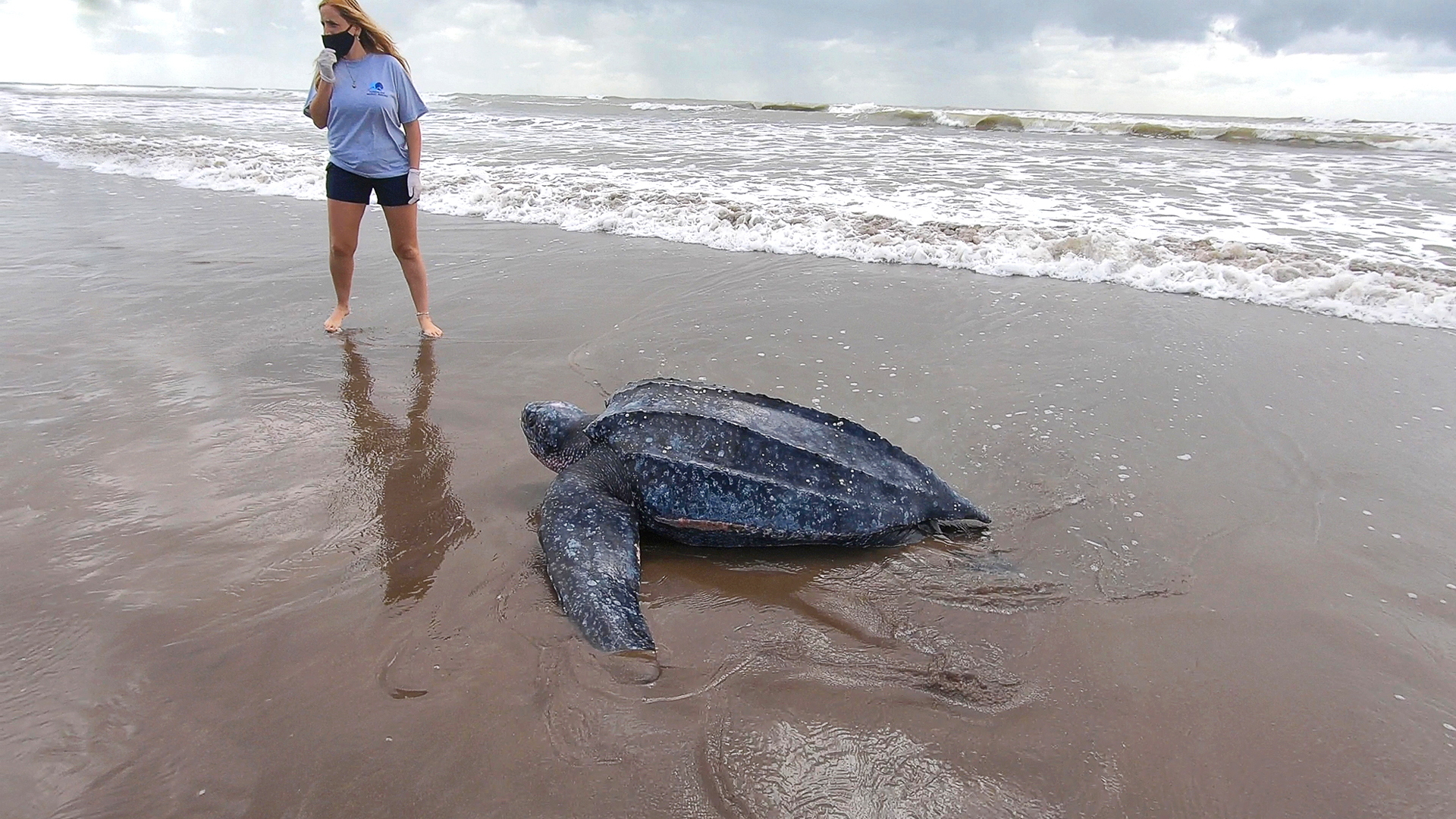 The turtle was released to the sea in San Clemente del Tuyu, Argentina. (Mundo Marino/Real Press)

BUENOS AIRES, Argentina — Volunteers at the Mundo Marino Foundation, the largest aquarium in Argentina and a conservation center, released a rare leatherback sea turtle into the ocean four days after recovering from injuries.

Tourists walking along the Costa Azul Beach in the Partido of La Costa in the eastern Argentine province of Buenos Aires found the sea turtle on March 18. The tourists contacted the foundation, and volunteers arrived on the scene and found the turtle was dehydrated and underweight.

Mundo Marino Foundation Biologist Sergio Rodriguez Heredia said the tourists showed videos of the turtle struggling to enter the sea to volunteers at the scene.

“The tourists kept a safe distance from the reptile and were not bothering it,” Heredia said.

Volunteers waited to see if the turtle could return to the ocean for around 90 minutes before deciding it was too weak and needed treatment. The 1.4-meter-long leatherback turtle weighed 208 kilograms (459 lbs).

As per the Red List of the International Union for Conservation of Nature (IUCN), leatherback sea turtles are considered “vulnerable”. However, they are listed as critically endangered in the south-eastern Atlantic region.

“As the turtle showed unusual behavior and was exhausted after several attempts to enter the sea, we decided to bring it to our rescue center,” Heredia said.

The biologist said it was the first such turtle the foundation treated as stranded leatherbacks are usually found dead on the beaches.

“It did not have marks or evidence of being trapped in a fishing net. It also did not have injuries common with boat accidents, as usually happens with this turtle species,” Heredia said. “It was apparently in a good state of health, but we did determine that it was underweight and dehydrated.”

He said the foundation experts observed the young turtle in the center’s pool to find out if it was “strong enough to lift its head and breathe outside the water, how it swam, and if it floated in the usual way”.

Explaining the process, Heredia said: “If it appeared unbalanced, it could mean it was suffering from pneumonia or gas in its intestines which could affect its health.”

The biologist said this species could not undergo a long recovery process outside their natural habitat because “they are deep-sea turtles with a special diet of jellyfish that is hard for us to replicate. So, the shorter, the better”.

In the end, the turtle stayed with the foundation for four days before being returned to the sea.

“Apart from dehydration, a blood test detected leukopenia – a reduced number of white blood cells. So, it underwent a course of antibiotics,” said Foundation vet Juan Pablo Loureiro. “We also carried out an immunotherapy session to help boost its immune system.”

A day before its release, the reptile had another blood test. The test confirmed that it was on the mend and responding well in the center’s pool.

On March 22, the turtle was taken to San Clemente del Tuyu, and volunteers in a boat helped it return to the deep sea.

Biologist Karina Alvarez said that leatherbacks do not have a bony shell, hence their name.

“Their diet is mainly jellyfish, and they help to control jellyfish populations in the sea,” said Alvarez. “They migrate over great distances, and it is known that the turtles on the Argentine coast are linked with those nesting on the African coast. So, they commonly cross the Atlantic to breed and find food.”