Saints, conquerors and pirates have walked through its halls. 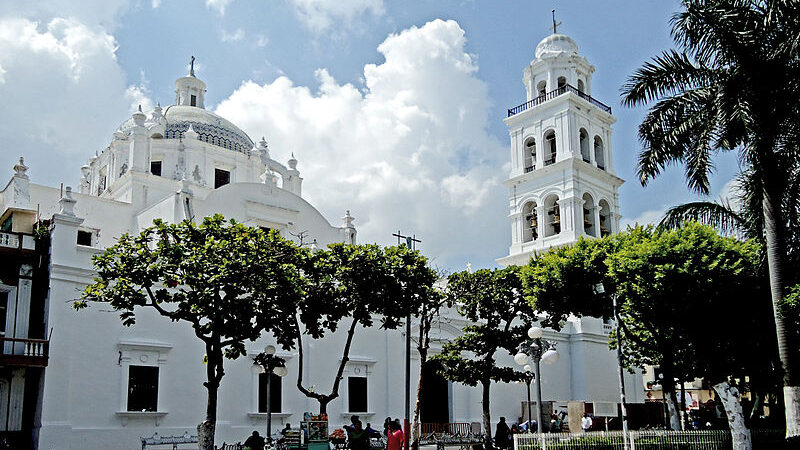 Veracruz Cathedral is built out of coral and quarry stone, as well as tiles from the neighboring state of Puebla. (Mexican Government)

Veracruz was the place where Cortés first arrived when he led his men to conquer Mexico. Now, it remains a tourist destination thanks to its many colonial-era buildings and pre-Colombian ruins.

One of the most important colonial buildings in Veracruz is the Church of Our Lady of La Asunción, a hotspot for locals and tourists alike.

“It is a historical church on both a cultural and a religious level. Popular belief is that the temple was made on the command of Hernán Cortés, who arrived on the Holy Friday of 1519 to build the cross,” said Ricardo Cañas Montalvo, director of the Museum of the City of Veracruz.

Veracruz Cathedral is also considered one of the most beautiful churches in the state and gathers hundreds of people each week to celebrate mass. Moreover, the Virgin of La Asunción has been celebrated in the cathedral since the beginning of the 18th century.

It is located at the left of the Municipal Palace, on Mario Molina Street. It has five different areas, with the central one being the largest. It is a dome nearly 118 feet (36 meters) high. On the outside, it has tiles brought from Puebla and is mainly built out of marine coral and quarry stones.

“The material — the architectural backbone of the building, so to speak — is completely made out of coral. The church has a rich background, not only on the religious side, as it also where the pirate Lorencillo locked up the inhabitants of the city to loot the city,” said Cañas Montalvo.

It did not start as a cathedral, as it was a small parish. However, due to the influx of parishioners, Manuel Gutiérrez Zamora, the governor of Veracruz at the time, ordered several expansions to take place, taking care to respect the neoclassical style of the original building.

“The cathedral started as a small construction made out of wood and palm. However, it was burned to the ground and consumed by a fire caused by the church’s lit candles. The church was recreated and expanded to the building we now know it to be in 1731,” said the historian.

The Church is an important sacred place for Mexicans. There are crystal chandeliers from the Austro-Hungarian Empire. The side chapels are dedicated to Blessed Miguel Agustín Pro, Saint Charbel, the Holy Trinity, and Saint Joseph.

“There are many important holy regions in church,” said Ricardo Cañas. “There are historical images of the Virgin of La Merced. It also has a Chapel dedicated to the Immaculate Conception, which was restored some years ago and looks pristine.”

Its main altar has sculptures of baroque ornamentation and a second floor for the church’s choir. Some of the most recommended days to visit the church are in December and Easter, when the choir voices harmonize and complete the parishioners’ religious picture.

Without a doubt, it is a place full of history.

“Another interesting tidbit of information is that the cathedral was the place where the first photograph in Mexico was taken,” said Cañas Montalvo.

Since 2009, the Cathedral has been part of a “rescue plan” organized by the group Rescatamos Catedral A.C. It is a group of experts that seeks to keep the construction clean and tidy, let its history be known, and let the Veracruz population attend various events. The group is headed by Tere Malpica de Estandía and chief architect Flavio Salamanca Güemes.

In 2018, then-speaker for the diocese Father Víctor Manuel Díaz Mendoza reported that the restoration project was going smoothly and as expected, according to the diocese’s official website.

“After the high temperatures ended, with all the cold winds brought by the low temperatures, the humidity rises. It is needed to give the diocese correct treatment so that every possible stain disappears,” said Díaz Mendoza. “We also have to give maintenance to the mechanical equipment, the musical instruments, air conditioning units, and cameras.”