The Archaeology Of Easter: How Science Supports The Final Days Of Jesus Christ

Biblical archeologists are drawn to Israel, hoping to find overlap between faith and historical evidence through careful research. 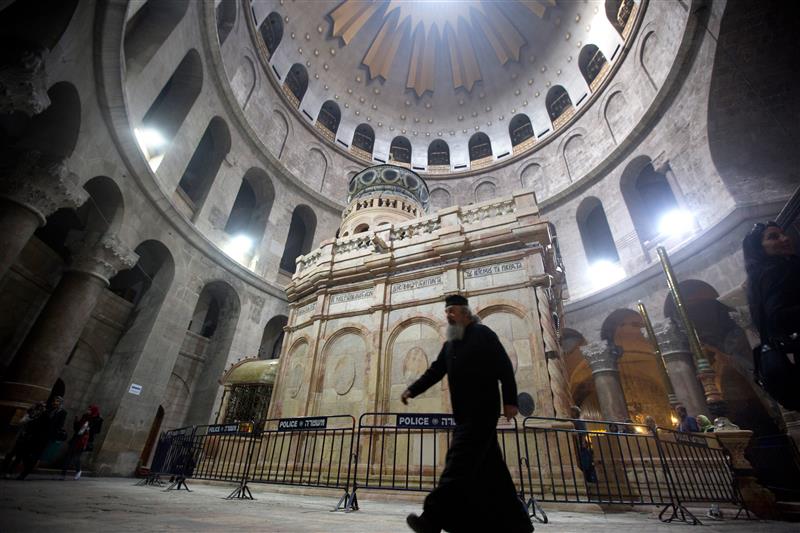 A priest walking in front of the tomb of Jesus, presently the Church of the Holy Sepulchre, in Jerusalem, after a multi-million dollar archaeological renovation. The tomb is said to be the place where Jesus Christ was buried and then resurrected from after his crucifixion. (Lior Mizrahi/Getty Images.

On Easter Sunday, Christians celebrate the resurrection of Jesus Christ, and though belief in the resurrection requires faith, there is a growing body of archeological evidence that corroborates the biblical account of his final days.

Biblical archeologists are drawn to Israel, hoping to find overlap between faith and historical evidence through carefully curated research.

“Archeology is an independent source of very valuable information that sheds light on all sorts of different aspects relating to the final days of Jesus,” said Dr. Shimon Gibson, professor of archeology and history at the University of North Carolina at Charlotte, to Zenger News.

“Forensic scientists have to go in and have a look. Then, we construct events based on the bits and pieces that are left. That’s what archeologists do. I’ve got to be able to match up my statements, not based on intuition, but based on absolute knowledge of the evidence in hand,” said Gibson, who has been involved in multiple archeological excavations across Israel, including Jesus’s birthplace in Bethlehem, presently the Church of Nativity.

According to the Bible, Jesus was betrayed by his disciple Judas in the Garden of Gethsemane, at the foot of the Mount of Olives in Jerusalem.

Though different religious groups claim different points at the base of the Mount of Olives correspond to the exact location where Jesus prayed in anguish before his arrest and subsequent crucifixion, there is some archeological evidence to support the site’s appearance in the Bible.

The word Gethsemane, derived from Aramaic, means ‘oil press’, and a team of archeologists with the Israel Antiquities Authority in 2020 unearthed the remains of a 2000-year-old Jewish ritual bath at the Mount of Olives site.

Jewish workers in wine or oil production were required to purify themselves in ritual baths called mikvahs, suggesting that Gethsemane was used for pure oil production during the time of its mention in the Gospels.

Those same archeologists discovered the remains of a sixth-century Byzantine church and a later Crusades-era church built over the spot where the disciple Judas is believed to have betrayed Jesus Christ. The Church of Gethsemane, built in 1924, now occupies this space.

The garden itself is a sanctuary for pilgrims. The grove of eight olive trees humbly appears as it likely did in ancient times.

The National Research Council of Italy Trees and Timber Institute reported in a 2014 study that all eight trees were propagated from a single genotype, or parent plant. Researchers with the institute published a separate study that year that used radiocarbon dating to find that some of the olive trees dated back to at least 900 years ago, while the rest were too gnarled to test.

Olive trees have the ability to regrow after being cut off at the roots, which researchers say indicates the possibility that Jesus Christ may have prayed beside a tree that still stands today, or a near relative.

The site believed to be Jesus Christ’s tomb, presently within the Church of the Holy Sepulchre in Jerusalem, was excavated for restoration in 2016 by a team of scientists from the National Technical University of Athens.

Mortar samples taken from the oldest marble slab placed atop the limestone burial bed were dated to the fourth century, when Roman Emperor Constantine built the church over a cave he believed was Jesus Christ’s burial site. Other first-century tombs were also discovered underneath the church.

The Holy Land is filled with biblical references come to life, yet geological patterns indicate that many modern tourist sites sit multiple feet above their original locations due to the accumulation of sedimentary rock.

Indeed, it is unknown exactly where Golgotha is. Also known as Calvary, Golgotha is believed to be the site of Jesus Christ’s crucifixion, somewhere outside the historical city walls.

Advances in radiocarbon dating have given archeologists new methods to accurately date the origins of ancient sites. The Israel Science Foundation funded a team of archeologists in Jerusalem to embark on a four-year project to identify ancient ruins in the city by measuring the decay of radiocarbon to nitrogen.

This method has scarcely been applied to the holy sites, which have traditionally been dated by identifying artifacts. The results of the study are set to be published in 2022.