Popcorn With Zenger: ‘Godzilla Vs. Kong’ Exposes The Problem With Cinematic Universes Colliding 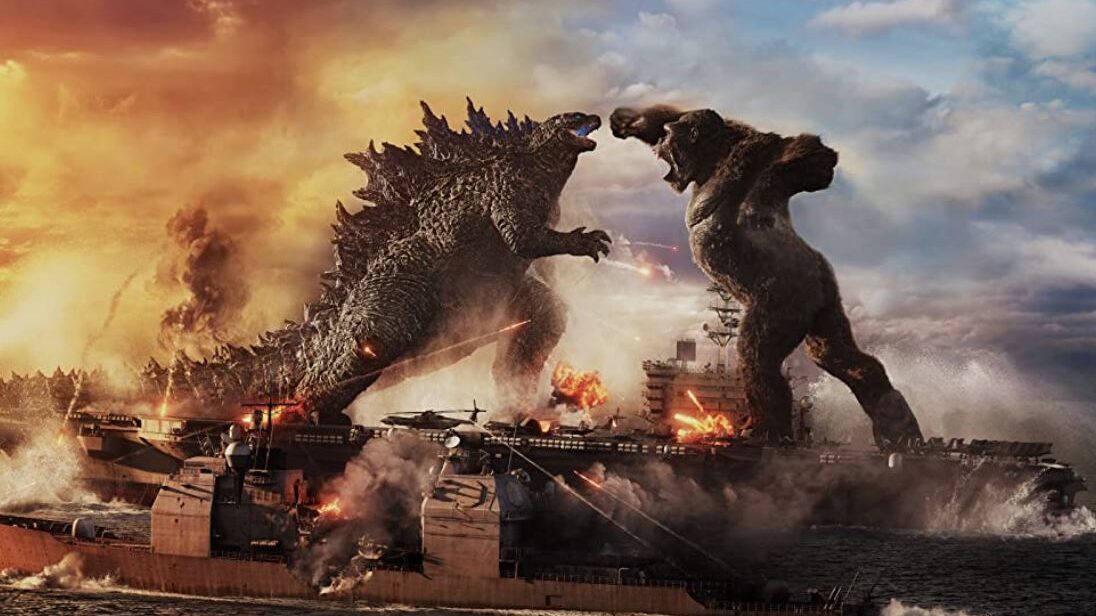 The King of the Monsters battles King Kong in Warner Bros. and Legendary Pictures' “Godzilla vs. Kong.” (Courtesy of Warner Bros.)

Audience excitement for “Godzilla vs. Kong” depends on how long they’ve been waiting to see two CGI giants battling on the big screen.

Back in March 2010, Legendary Pictures announced its acquisition of the Godzilla license to bring the King of the Monsters back to the big screen. Following the success of 2012’s “Marvel’s The Avengers,” the idea of a potential monster movie universe picked up steam and moved forward following the 2014 release of “Godzilla.” The film wasn’t a massive success, but it was good enough for Warner Bros. to move to the next stage — bringing back King Kong in 2017’s “Kong: Skull Island.”

But with the release of 2019’s “Godzilla: King of the Monsters,” it became clear that Legendary’s MonsterVerse wasn’t drawing the Marvel numbers they were hoping to see. Hopes of a Marvel-like opening for “Godzilla vs. Kong” were dashed during the coronavirus outbreak, so Warner Bros.’ only shot to save face was a simultaneous release on the streaming platform HBO Max.

As the battle lines are drawn, on one side is The King of the Monsters and on the other King Kong, for a film that will entertain for all of 15 minutes.

The Story: Set five years after the events of “Godzilla: King of the Monsters,” Godzilla is back, but for some reason is hostile to humans. After Godzilla attacks the Apex facility in Florida, Kong (another Titan), is transported away from a holding facility with the hope of bringing him to Hollow Earth. While researchers believe Hollow Earth is the key to discovering more about the Titans, Apex hopes that Kong will help them create a weapon strong enough to stop the King of Monsters in his tracks.

Bright Spots: If “Godzilla vs. Kong” has one thing working in its favor, it is the visual effects. If big, bright and dumb popcorn films are your bag, this film has your flavor in bunches. This is a film made for D-Box or 4DX viewing, if you have one in your town. Giant monsters face off in a slugfest that displays bright nights and plentiful damage. Audiences can enjoy the fantasy of turning a whole city into a battleground with no concern for human casualties. These movies have come a long way from a stop-motion figurine and a man in a rubber suit destroying paper buildings.

Weak Spots: The fundamental problem with every big-budget Kaiju film that Warner Bros. has presented is that they offer nothing but a 10-minute giant monster fight. If the studio was selling a 30-minute short filled with action and explosions, it would be amazing.

“Godzilla vs. Kong” is a two-hour popcorn film that is 80 percent filler. 2014’s “Godzilla” was the only movie in the MonsterVerse to give audiences a coherent human story on the backs of Bryan Cranston, Elizabeth Olsen and Aaron Taylor-Johnson. Since then, the filmmakers have opted to present big ensemble casts with no emotional attachment and poor storytelling.

We are introduced to characters who are so one-note, you could write their entire personality on a sticky note, such as the young deaf girl who for some reason is the only one who can communicate with Kong. Other characters can be explained simply as a strong female lead, the slapstick conspiracy theorist whose jokes are never funny, and finally, the evil corporation man.

The storytelling is paper-thin, and one-dimensional characters fill the overwhelming majority of the runtime, only to get you to a third-act fight that isn’t worth the investment. Millie Bobby Brown reprises her role of Madison from “King of Monsters,” but her storyline is diminished to pointless hijinks that have no stakes in the central plot at all. With the human element taking up so much time with so little purpose, “Godzilla vs. Kong” is a seven-year investment that doesn’t pay off.

The Takeaway: “Godzilla vs. Kong” uses shiny colors to distract from the fact that it is a film built on just two set-pieces. Kudos to the visual effects team for putting in the work to make this movie a reality, but unfortunately that effort wasn’t matched by anybody else. “Godzilla vs. Kong” is a big-screen spectacle but won’t leave much of an impact.

See or Skip: “Godzilla vs. Kong” was made for movie theaters. If you need to escape your home or support your local theater, there are worse ways to spend your time. Otherwise, this film is nothing but empty calories.