Discover The Molcajete, The Secret To Mexican Salsas

Traditional mortar and pestle is the preferred method for creating authentic condiments. 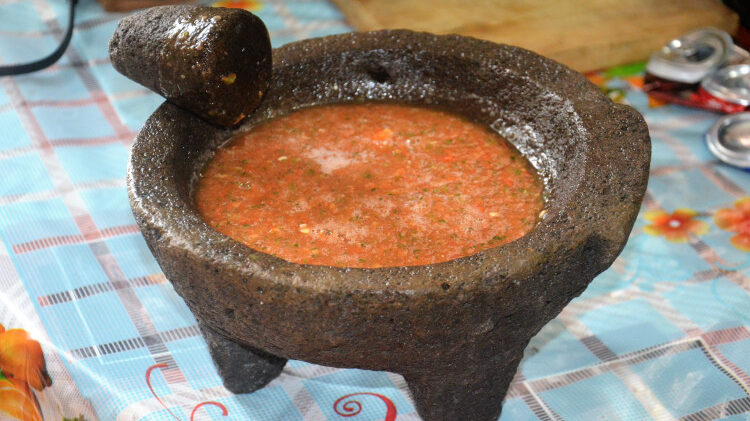 Mexicans prepare their salsas in molcajetes and serve them at the table using the same utensil. (Charlie Moron/Café Words)

Chili peppers have been part of Mexican culture since pre-Hispanic times. Since then, Mexicans have ground them in salsas using a molcajete, a mortar with a pestle, both made of volcanic rock.

A molcajete is defined as a “large stone or terracotta mortar, with three short, sturdy feet, used for preparing salsas” by the Royal Academy of the Spanish Language. The academy also says that its name comes from “mulcazitl,” the Nahuatl word for bowl.

Archeologist Eduardo Merlo Juárez traces another etymological root and deepens in its origin. “Around the Spanish conquest, a basalt stone container called ‘molcaxitl’ became popular, a kind of mortar, which required a temolotli or stone pestle. The terms for the two implements were gradually Hispanicized as molcajete and temolote or tejolote, a word that alludes to the legendary Xólotl,” the dog god who was thought to accompany people to the underworld.

“Salsas taste different when made in a molcajete. The stone may be what enhances their flavor,” said Guadalupe Ramírez Hernández, a homemaker and cook. “When one makes a salsa ranchera in a molcajete by crushing garlic and adding onion, peppers, cilantro leaf by leaf, and coarse salt, one knows that the result will be extraordinary. Whether one adds it to tacos or uses it in a special stew, the salsa will be responsible for the meal’s success.”

Blenders and other appliances arrived in Mexico by the end of the 1940s. Women were impressed by how well they made purées and soups. However, they kept preparing their salsas in molcajetes.

Why did this happen? Experts say that grinding in a molcajete enhances the cook’s personal touch. However, the choice of appliances or molcajetes ultimately became a social marker, distinguishing the rich from the poor.

“One must cure a molcajete before using it. Otherwise, the juices from whatever one grinds will filter out through the holes … Before curing it, one must wash it well, dry it in the sun, and then grind coarse salt and corn. The natural holes in the stone will seal, preventing the juices from filtering out,” Ramírez Hernández said.

More than a grinding tool, the molcajete is part of the Mexican culture and identity.

“My mother used it, I learned how to use it and I taught my daughters to do it,” said Rosario Oropeza, an 85-year-old Mexican. “One can find a molcajete in every Mexican home, and I have not met a single person who does not know how to use it.”

“I consider that real salsas are made in a molcajete, but I understand that there are already many devices that make things faster. However, in my opinion, they don’t do the job better,” Oropeza said.

Enjoy the molcajete salsa with pork rinds, tortilla chips or tortillas and discover why Mexicans hold this utensil in such high esteem.

(Translated and edited by Gabriela Olmos; edited by Matthew B. Hall.)