The Endless Strike: Unionism In Mexico

Unionized Notimex employees have been on strike for a year. The history of Mexican unions explains why. 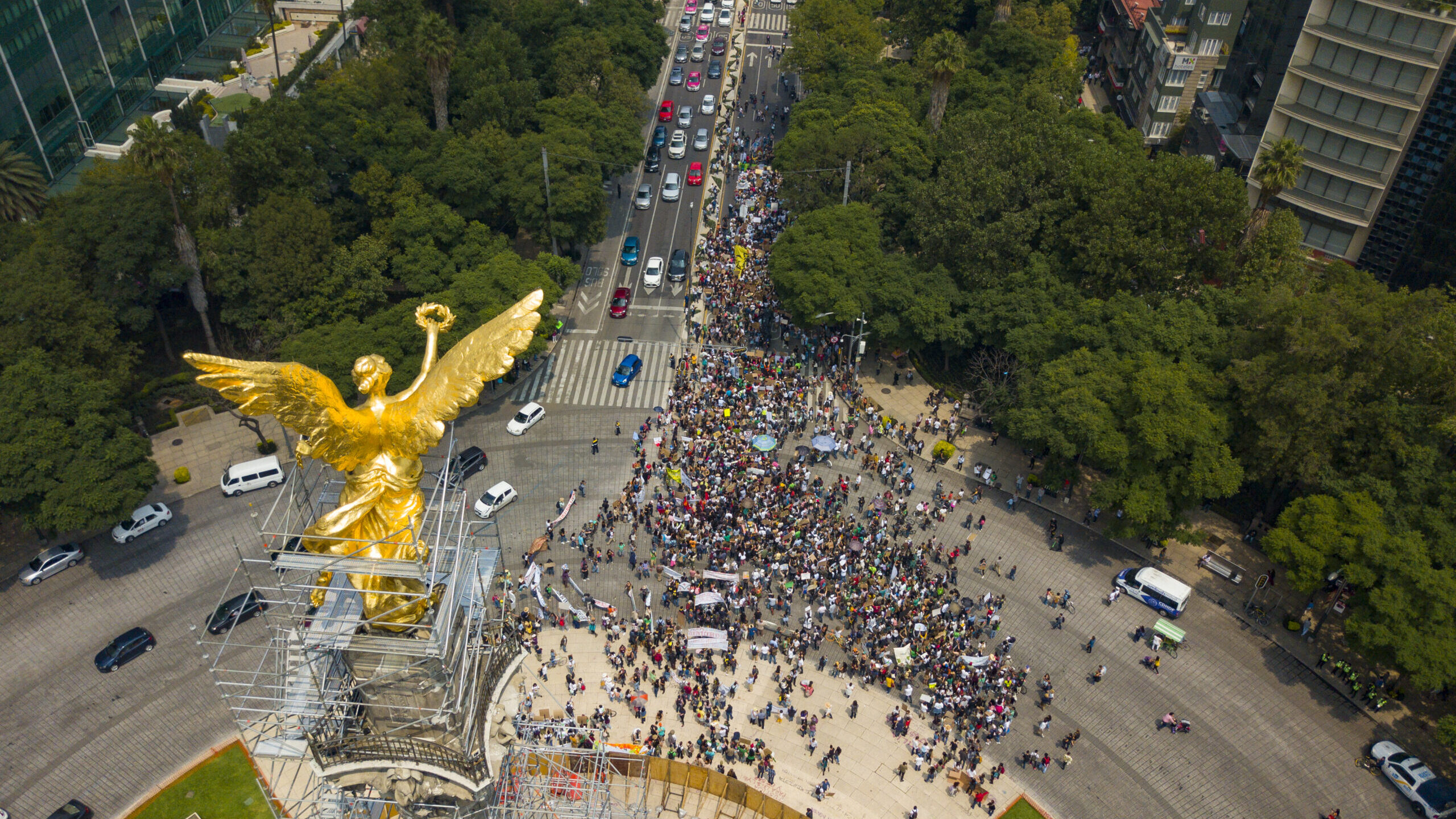 The Angel of Independence, on Paseo de la Reforma avenue, serves as the setting of a demonstration in Mexico City. This street crosses the city from east to west. Demonstrators often take this route, as it leads to the Historic Center, near the National Palace. (Hector Vivas/Getty Images)

MEXICO CITY — More than a year on strike, and there is no solution on the horizon. The unionized workers of Notimex, the Mexican state news agency, are living through the struggle.

The U.S. Department of State pointed out Martínez’s responsibility.

“Sanjuana Martínez Montemayor, the director of Notimex, the government’s news agency, ordered journalists to eliminate or not publish content about certain government institutions and officials,” said the report.

“The most important responsibility is to carry out the strike that is still ongoing,” said Adriana Urrea, a journalist and the leader of the Notimex union, SutNotimex.

“This means defining legal, political and media strategies; supervising the strike’s operation regarding camps and guards; meeting colleagues’ demands and working as a team,” she said.

Mexican unions’ history helps explain why strikes last so long in the country, and why solutions are elusive.

A union is a group of workers voluntarily associating to protect their economic, professional and social interests against those of the company. In Mexico, they earn official recognition by registering with the Secretary of Labor and Social Welfare or with a Conciliation and Arbitration Board.

The reduction of working hours, access to social security and housing are some benefits that unions have achieved for workers.

However, unions are now much less powerful than they once were. According to Mexico’s National Institute of Geography and Statistics’ figures, only about 4.5 million workers were unionized in 2020.

In Mexico, the state and the unions have not been separate entities; neither has the news agency, as Lopez Obrador’s appointment of Martínez and the accusations that she silenced specific stories attest.

“In Mexico, union corporatism was the rule,” said Germán Sánchez Daza, a doctor in Economics with a master’s degree in Social Sciences and researcher at the Autonomous University of Puebla. “That is, submitting trade union organizations to the interests of the state.”

Workers in Mexico did not create unions. The state formed union federations, consolidating its influence over the working class for political purposes.

The combination of repressive actions and a series of labor and economic benefits explain corporate unionism’s loyalty to the Mexican government and the dominant party. Workers enjoyed years of good salaries and the protection of laws on the condition that they not attack the system.

“The interests defended by the unions are reflected in an agreement with the company. It is called the collective bargaining agreement. It establishes positions, responsibilities, schedules, salaries and benefits,” said Sánchez Daza.

“The union’s Executive Committee is made up of a number of workers who represent the rest. They signed a contract that allowed them to earn promotions, seniority and raises in their salary. This was disadvantageous for employers who could not make use of an employee in a particular trade because union regulations prohibited it,” he said.

The unions historically linked to the state had the mission of helping workers and their families, but they were easily corrupted.

“I was unionized because I was the daughter of a retired worker. But even so, to join the union, I took an exam,” said Raquel Moreno, a former employee of the now-defunct Luz y Fuerza del Centro Company.

“There, I had financial aid to buy a house, funeral expenses, school supplies and daycare; bonuses three times a year, paid vacation, personal loans and a savings fund.”

The benefits were ample: a comfortable schedule (6 hours a day), work security (employers couldn’t fire workers) and most people could retire at 45.

Many wanted their children to have the same benefits. “But over time, this [the system] was distorted and corrupted,” said Sánchez Daza. “The positions were sold, or the persons who occupied them did not meet the company’s requirements. However, it could not move or fire them because the union came to their defense.”

When Carlos Salinas de Gortari took office in 1988, the powerful Confederation of Mexican Workers lost its influence after more than 50 years of participating in the country’s politics. Its leader Fidel Velázquez died in 1997, at the age of 97.

The Confederation’s long history serves as proof of the few changes that Mexican unionism underwent when it was linked to the Institutional Revolutionary Party, which held power for 70 uninterrupted years.

The party lost its power in 2000 with the election of President Vicente Fox Quesada. State control diminished in every way, and unionism weakened significantly.

These changes have brought instability and a lack of respect for labor contracts.

“The collective bargaining agreement indicated that women could retire after 24 years 6 months of service,” said Moreno. “I was just half a year away, but the union leader, Martín Esparza, sold the Company [in 2009] and I was unable to negotiate. The company’s goal was to fire us and hire us again, but it never happened.”

The López Obrador administration (Morena party) has another vision of unionism. But it will take time for the previous system to evolve, as the case of Notimex shows. Besides, it can be contradictory, as the U.S. Department of State reports.

“We have not spoken with Sanjuana Martínez because she does not allow it. We are waiting for a solution,” said Urreta.

“She goes in a direction opposite to what López Obrador says. He assures workers that our rights will be respected, and our conflict will be resolved lawfully. We want to restore the cordial and healthy relationship between the company and the workers; [we also want] freedom to unionize, freedom of assembly and speech, that the requests of the collective contract are recognized and that colleagues are reinstated.”

“The workers will revise all registered collective contracts to agree upon clauses with the union signing them,” said Sánchez Daza.

But the unions’ cause is already stained in the minds of many Mexicans.

“This is about inducing a new unionism, but the process is very slow. Today’s workers, who do not have a union tradition, are not interested in it. They consider unions to be corrupt, and that the workers who defended their interests have already retired.”

Besides, the fact that the López Obrador administration appointed Martínez raises questions.

After more than a year on strike, Notimex employees face this unique Mexican crossroads.