Treaty has survived wars, but the source of the basin’s rivers are glaciers that are shrinking. 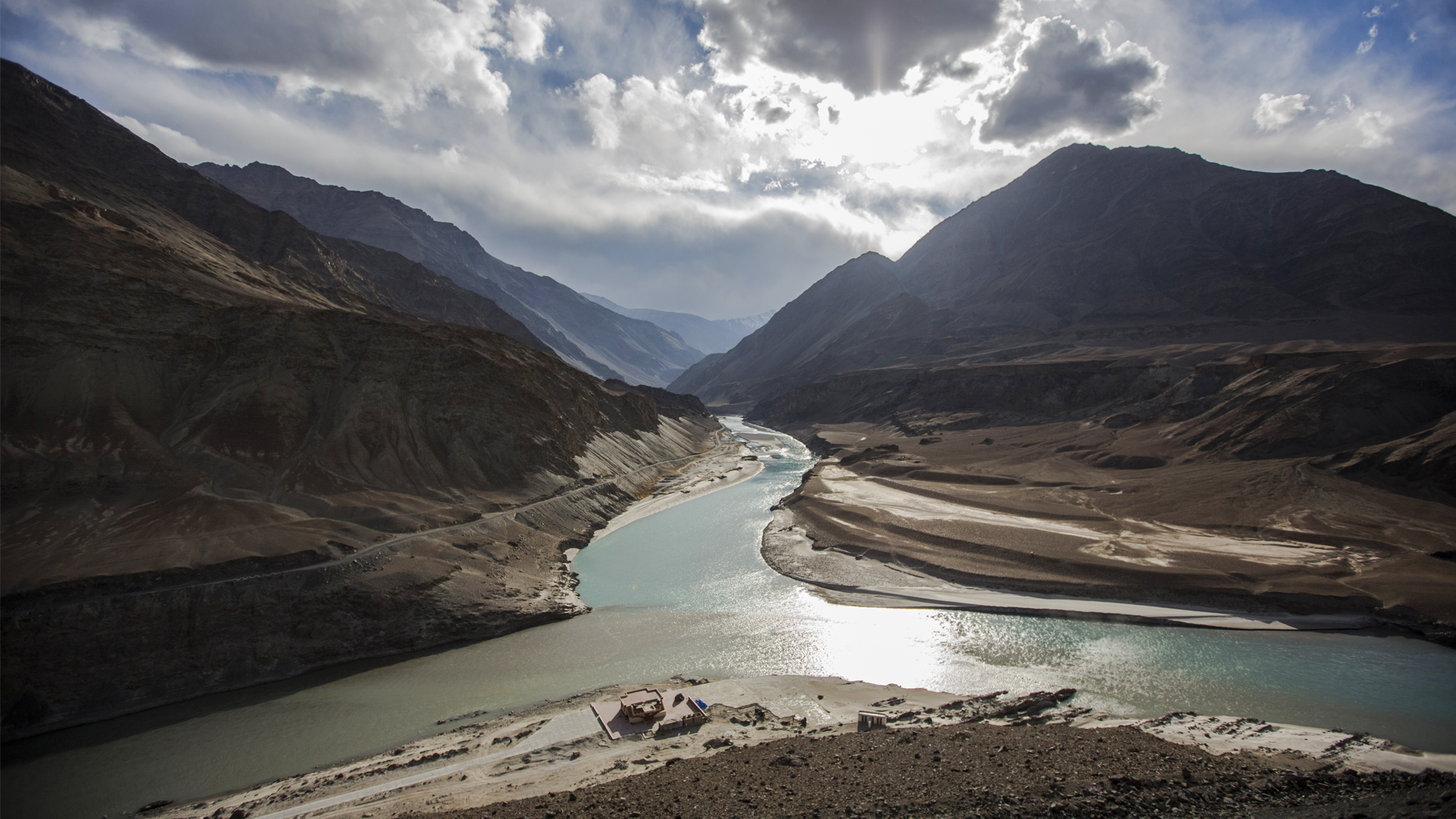 The confluence of the Indus river (L) and the Zanskar river (R) at Sangam. (Daniel Berehulak/Getty Images)

The Indus water commissioners of India and Pakistan last met at the beginning of February 2019.

The events after the last meeting — the terror attack on the Indian Army in Pulwama, Jammu and Kashmir, on Feb. 14, 2019; India’s airstrike in retaliation on terrorist camps in Balakot in the Khyber Pakhtunkhwa province of Pakistan; and India scrapping Jammu and Kashmir’s special status — have done more harm than good to the discussions.

After India abrogated Article 370 in Kashmir — a Himalayan region split between Pakistan and India but claimed by both — an irked Pakistan demanded its ally, Saudi Arabia, to intervene.

Pakistan went as far as to threaten that if Riyadh failed to take action, Islamabad would go to Muslim nations Saudi Arabia considers a challenge to its leadership of the Islamic world.

Before the 2019 events, the treaty was in danger after the 2016 terrorist attack in Uri in Jammu and Kashmir that left 18 Indian soldiers dead. Amid calls for scrapping the water distribution pact to mount pressure on Pakistan to act on terrorists, Indian Prime Minister Narendra Modi had said, “Blood and water can’t flow together at the same time.” 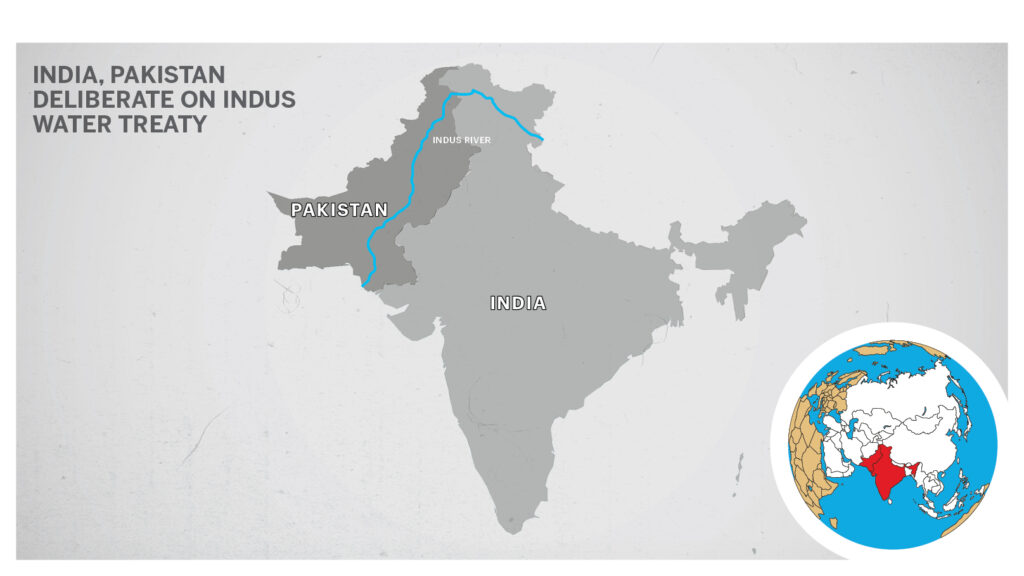 This year’s meeting, held on March 23-24 in New Delhi, comes amid renewed interest from both sides to repair ties. Last month, the countries announced they would strictly observe a ceasefire along the Line of Control, the unofficial border separating the parts of Kashmir administered by the two nuclear-armed South Asian nations and other sectors.

Some observers believe the meeting was essential for Pakistan to take stock of the developments by India on the Indus River.

“It was a routine meeting, but important for Pakistan to seek details of the projects that India expedited on the Indus River and its tributaries,” said Uttam Kumar Sinha, head of non-traditional security center, Manohar Parrikar Institute for Defence Studies and Analyses, a think tank of India’s defense ministry.

Sinha has recently written a book on the history of the Indus basin territory and its politics.

“The current government’s foremost commitment is the economic integration of Jammu and Kashmir into the rest of the country. So, it needs water for navigation, irrigation, hydel powers to increase economic activities in the region,” said Sinha.

Importance of the treaty

After nine years of negotiations over sharing the transboundary Indus River basin water, India and Pakistan had reached an agreement in 1960 called the Indus Waters Treaty.

The Indus basin was divided into eastern and western rivers. All the water from the eastern rivers — Sutlej, Beas, and Ravi, which amounts to around 33 million acre-feet annually — was allocated to India. And the water from the western rivers — Indus, Jhelum, and Chenab, which is about 135 million acre-feet annually — was allocated to Pakistan, except for specified non-consumptive and agricultural use permitted to India.

The Indus River originates in Western Tibet and flows through the Ladakh and Gilgit-Baltistan in the mountainous regions of the Himalayas before merging in the Arabian Sea near Pakistan’s Karachi. Its tributaries — Jhelum, Chenab, Ravi, Beas, and Satluj — make up the Indus Basin. The basin is mainly shared by India and Pakistan, with a small share for China and Afghanistan.

Emphasizing the need for hydel projects, Sinha said: “The treaty allows India to store or utilize 3.6 million acre-feet of water of western rivers, which India is yet to realize due to Pakistan’s attitude of taking every difference to an international court.”

In the last two decades, the countries witnessed a trust deficit over the treaty’s institutional mechanism to resolve differences.

“Instead of solving [differences] among themselves under the given mechanism, matters are frequently reaching international courts,” Himanshu Thakkar, founder of South Asia Network of Dams, River, and People, told Zenger News.

In 2005, Pakistan challenged India’s 450-megawatts Baglihar power project on the Chenab River before the World Bank but lost the case.

In 2011, the countries went to the International Court of Arbitration, The Hague, over India’s 330-megawatts Kishanganga project on Jhelum River in Jammu and Kashmir. In 2013, the court upheld India’s right to proceed with the project with some observations.

In the recent meeting, Pakistan delegates asked for technical details of all planned projects on the western rivers. They raised objections on the Pakal Dul and Lower Kalnai hydroelectric plants’ design and flood data supply. Pakistan fears these projects will give India greater power to block water.

While India agreed to get the Kishanganga project inspected by Pakistani experts, Pakistan allowed India to inspect the Kotri Barrage over the Indus under Article VIII of the treaty that speaks of cooperation in engineering works to serve the common interest.

An aging Indus and climate concerns

Indus River is not the river it used to be 60 years ago.

The treaty merely partitioned the rivers without taking into account the ecological factors and its sustainable management. This acts as a severe limitation in the current climate change context.

In the past decades, water demand increased while water availability decreased. An April 2021 report investigated the effects of rising temperatures on water recharge for 31 major river basins worldwide. They found a decrease in recharge corresponded to an increase in temperature in 23 of the 31 river basins, with “12 basins showing significant reductions”.

Many glaciers, which are the sources of water, are also retreating due to global warming.

Both countries promote large dams and irrigation projects, which cause severe environmental damage in the fragile Himalayan region.

“Both countries are competing for accessing water resources instead of promoting sustainable use and management,” Shripad Dharmadhikary, founder of Manthan Adhyayan Kendra, a center for research, analyze and monitor water and energy issues, told Zenger News.

Dharmadhikary works on the conservation of rivers and studies the impact of large irrigation dam projects.

“They don’t realize the river’s limitations and environmental damages. It’s surprising why both countries are pushing for costlier hydropower in an age when a cheaper source of energy is available in the form of solar and wind,” he said.

Some experts believe numerous hydro projects in fragile Himalayan ecology are a disaster in the making. The Supreme Court of India had in 2013 stayed the building of 23 proposed dams on different tributaries of Ganga in the northern Indian state of Uttarakhand.

“Even smaller hydropower projects need to be properly studied. Unfortunately, India kept out less than 25 megawatts projects out of the ambit of environmental impact assessment,” said Thakkar.

A successful treaty despite several wars

Despite climatic concerns, wars, and frequent tensions between the neighbors, the treaty, in which the World Bank is one of the signatories, is considered one of the successful treaties in the world.

J. Harsha, director of the Central Water Commission, an Indian government organization that monitors the water quantity, quality of rivers, dam safety, policy, and planning, says regular discussions are in the interest of all stakeholders.

“Indus basin is the water-scarce trans-boundary basin, and all outstanding water sector issues need to be resolved through dialogue and discussion regularly,” Harsha said.