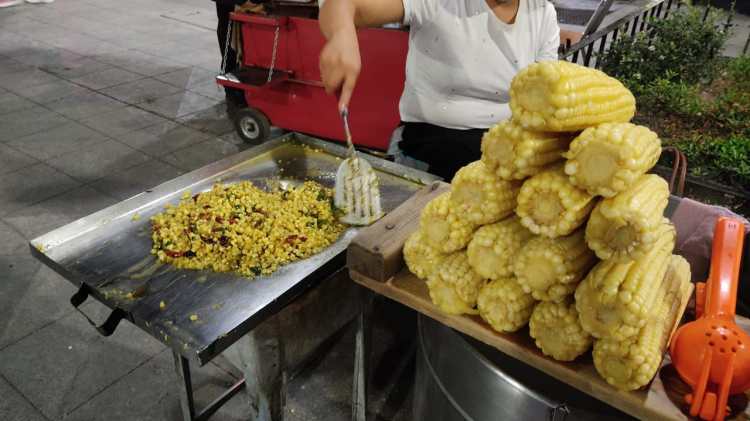 Over 9,000 years ago, the people of Mesoamerica — southern Mexico and Central America — domesticated corn. Soon after, they began worshiping this generous plant. Today, corn is still the basis of their diet — and one of the essential elements of their economy.

Corn is the central ingredient in scores of dishes in Mexican cuisine. A popular one is street corn.

Street corn is similar to the traditional esquite, a soupy snack served in Styrofoam glasses in Mexico City’s streets. But instead of boiling the kernels with broth in a pot or steamer, cooks fry them on a comal, a flat clay griddle.

“Here, we sell both traditional esquites and street corn. The latter is sold more because you can’t find it anywhere,” said Yamilet González who entered the street-corn business a few years ago. “Tourists appreciate it, and they even take photos of us.”

The secrets of street corn are passed down from generation to generation.

“My grandmother, my mother and I have worked on it. It’s been three generations now,” González said, minding the comal while her mother, Santa González, works in the saucepan.

Street corn “is a very particular esquite. One fries it with roasted peppers, epazote and butter,” she said. “We buy corn every day, three kilos (6.6 lbs) of corn a day for the traditional [esquites] in the pot and the street corn.”

For 30 pesos ($1.47), customers get their disposable glass full of the snack, which they season to their liking.

Although one can enjoy street corn at any time of the day, González prefers to sell it during the afternoon on the corner of Hamburgo and Génova, in the Zona Rosa, the heart of nightlife in Mexico City.

“The truth is that many may see it as junk food, but I would consider it a whole meal. It does satisfy you, and the corn provides you with several nutrients, in addition to the complement of dairy and lime,” said Carlos Murrieta, a banking executive.

In addition to Mexico City’s Zona Rosa, one can buy street corn in the Alameda Central (the city’s central park, next to the Fine Arts Palace) and at stalls in the Bosque de Chapultepec, both popular places among locals and tourists.