Cup stacking champion Jaydyn Coggins has jumped every life hurdle in his path. 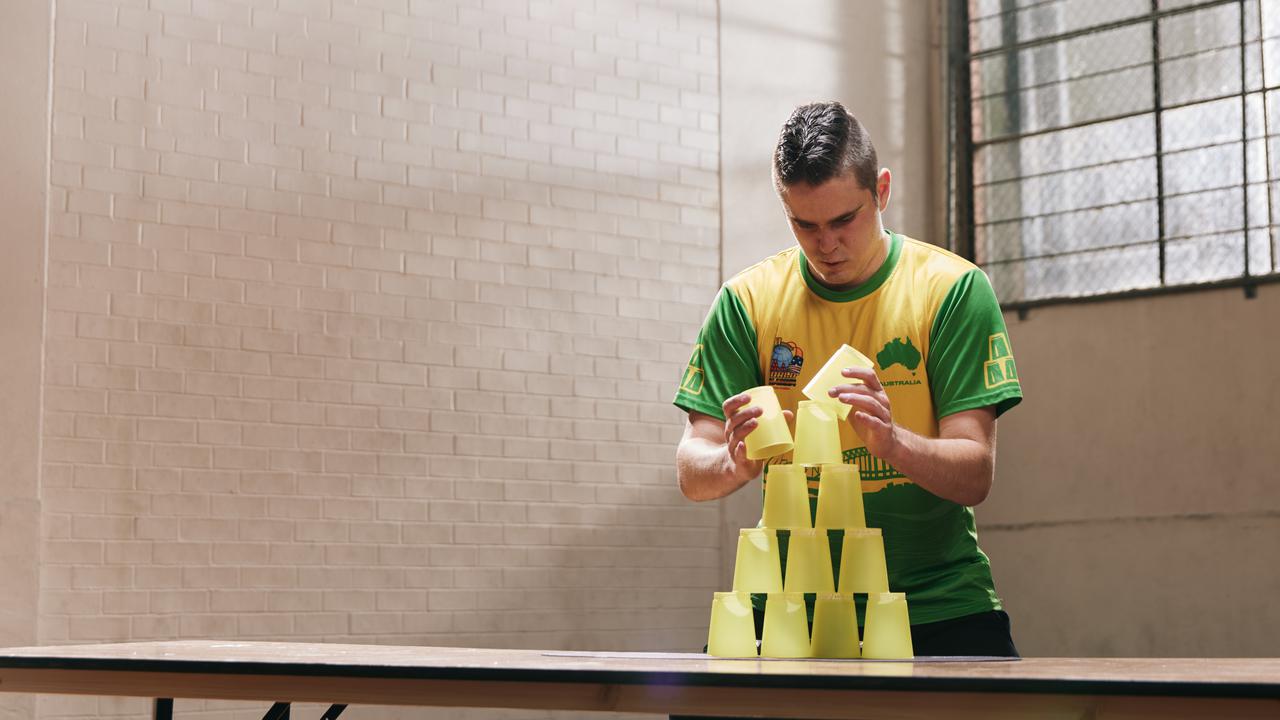 The teenager, who has jumped over many hurdles in life, is traveling the world with a unique “superpower”

Coggins can stack and unstack 12 cups in just over five seconds. The pros call it sport stacking, and he is the national champion you’ve probably never heard of — until now.

Born at 24 weeks and given a 25 percent chance of survival, the speedster was innately drawn to the pursuit before he even knew it was a sport.

“I started randomly,” the now 18-year-old told as he prepares for the world titles, to be held online early next month.

“I was about six years old, and I saw the cups there, and I thought ‘I’ll just stack them,’ then I rediscovered it when I was nine.

“I asked mum and (stepfather) Adam to buy me a set of cups, and I’ve been basically stacking ever since.”

The niche sport, which has its own international body, involves competitors stacking and unstacking cups into pyramids across three events: the 3-3-3, 3-6-3, and cycle.

Coggins has autism and partly credits the condition for his insatiable urge to shave milliseconds off his personal best, in-tournament cycle time of 5.440.

“It’s given me a few superpowers, so to speak,” Coggins said.

“It’s definitely helped me because my love of numbers drove me to be one of the best, and then my stats-loving self put me into even more of a hyperdrive.”

By 13, he won his first national crown and, in 2015, started his globetrotting adventures to test himself against the world’s quickest stackers.

The pursuit hasn’t come cheap, with mum Rachel Flierl estimating the cost of their overseas trips to be about AUD 50,000 ($37,985).

To help supplement travel costs and to keep sharp — with no national competition since 2017 — the wunderkind would busk in Adelaide’s Rundle Mall.

Many of the open-mouthed onlookers couldn’t make heads nor tails of it.

“I’ve seen so many people keep walking and walking into a tree,” Flierl said.

“Some people don’t even think it’s a sport either; some people think he’s doing magic.”

It has presented a new series of challenges to the Australian hope, who is up all hours of the night for competitions in the United States and the United Kingdom.

Before the borders snapped shut, Coggins flew to Florida for the 2018 World Sport Stacking Championships.

Coggins hopes TV programs he appears in will raise awareness of sport stacking and prompt more people to give it a go.