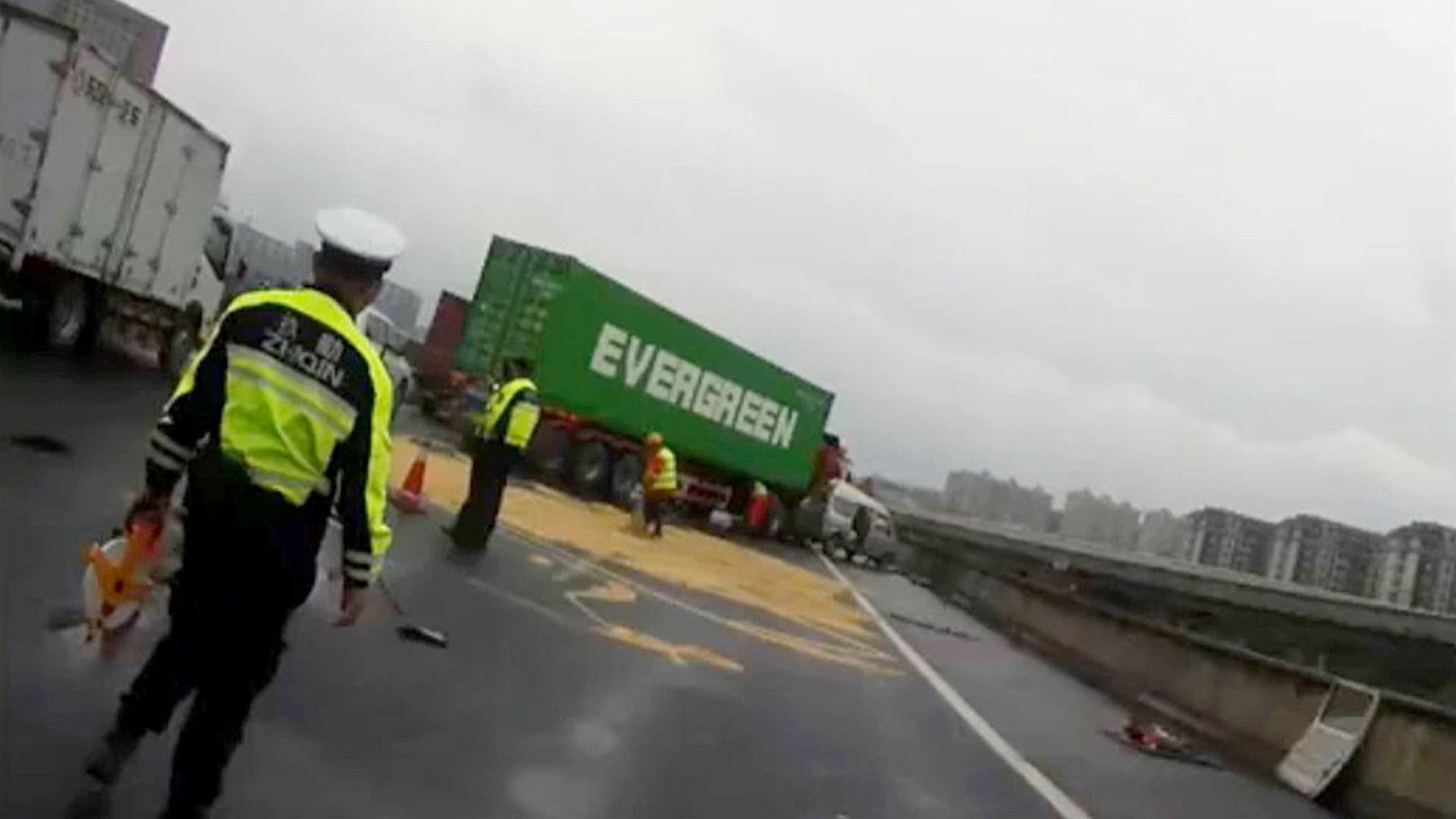 NANJING, China — A video was released of an Evergreen truck crashing into a stationary car and ending up blocking the whole highway on the Changchun-Shenzhen Expressway in the Chinese city of Nanjing on March 27.

In the video, a light-colored vehicle was seen braking and coming to a stop on the highway after reportedly breaking down.

Several vehicles pass the broken-down car before a truck with an Evergreen container approaches. The truck driver apparently fails to notice the stationary vehicle until the last moment when he suddenly slams the brakes and swerves left.

However, the truck apparently still crashes into the car before hitting the central reservation and bouncing back to block all three lanes. One person was injured in the accident.

The truck belonged to a transport company and the container to Evergreen Marine Corporation, a Taiwanese shipping firm that recently hit the headlines after its container ship blocked the Suez Canal on March 23.

Ever Given, a Golden-class container ship, ran aground in the Suez Canal after being buffeted by a sandstorm and strong winds.

The 400-meter (1,300-foot) long vessel was knocked off course, although the authorities have not ruled out “technical or human errors” as well.

The ship ran aground on one of the canal’s banks, obstructing the waterway and preventing other vessels from passing.

On March 22, the huge cargo ship was wrenched from the shoreline, raising hopes that traffic could soon resume and limit the economic fallout the incident caused.

Many netizens compared the highway incident to the Suez Canal obstruction, with some claiming that Taiwan is showing the world they want recognized independence from China.

On March 29, Evergreen Line confirmed that Ever Given was successfully refloated within the Suez Canal.

“The chartered vessel will be repositioned to the Great Bitter Lake in the Canal for an inspection of its seaworthiness,” it said in a notice. “The outcome of that inspection will determine whether the ship can resume its scheduled service. Once the inspection is finalized, decisions will be made regarding arrangements for cargo currently on board.”

Both incidents are under investigation by the respective authorities.

As per reports from Statista, the number of road traffic fatalities in China varies greatly from region to region. Guangdong and Hubei are the provinces with the highest number of traffic fatalities. The two are located in the eastern coastal area of China, which saw the the most traffic accidents in 2018.

On the contrary, only a few fatalities were reported in central and western regions of China. Reasons for this imbalance may be found in less traffic volume as well as the existence of fewer urban congested areas.

“In recent years, the number of casualties in traffic accidents has dropped significantly,” states the report. “In 2018, 63,194 people had died and 258,532 people were wounded in traffic accidents in China, seeing a growth compared to the previous year. Nevertheless, traffic accidents have emerged as one of the leading causes of death in China. The primary reasons may be unregulated road works and a lack of awareness among Chinese drivers.”