Saved from basement cages where they lived in agony as their bile was harvested for so-called traditional medicine.
By Joe Golder March 30, 2021
Facebook
Twitter
Linkedin
Email 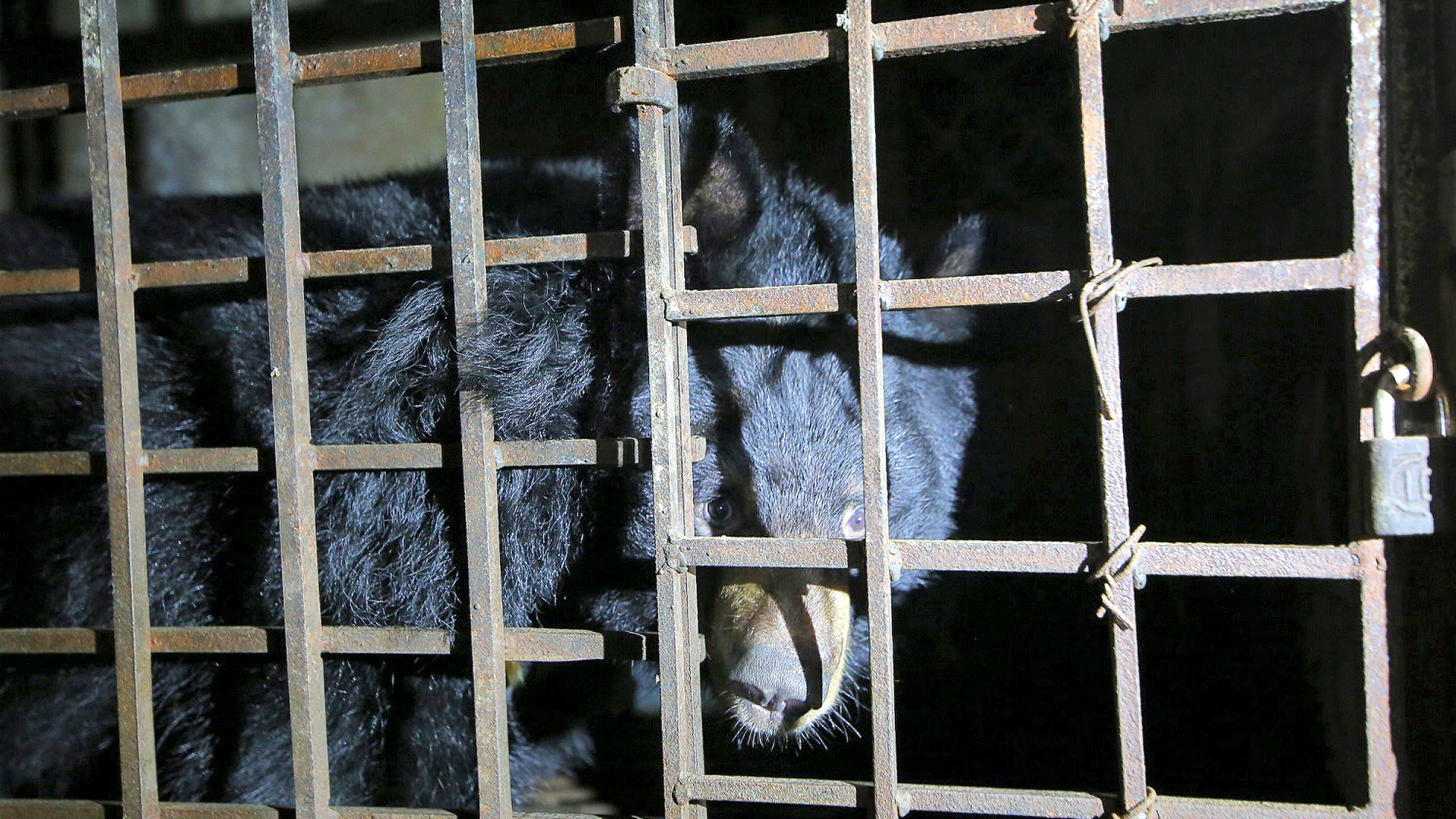 Male bear Xuan was rescued from a shop where it was held captive for bile trade. (Hoang Le, FOUR PAWS/Real Press)

SƠN LA, Vietnam — This footage shows two endangered bears rescued from dark basement cages in Vietnam, one of which was captive for 17 years.

The bile of the bears was harvested for traditional medicine.

Xuan and Mo, the two bears, were rescued in Son La province, in north-western Vietnam, on March 23. As per reports, they only saw artificial light and that, too, when they were fed.

“The keeping of bears is still legal in Vietnam. The country only has minimum requirements for the keeping of bears,” said Katharina Braun, a spokesperson for animal rights organization Four Paws. “Even if the keeping conditions do not align with those requirements, it is unlikely that the authorities would act. Every animal that is placed in species-appropriate care like ours is a big success already.”

The two bears are in such poor health that it is unclear if they will ever recover or if they will be able to socialize with other bears.

Braun said that despite Asian black bears being listed as threatened on the International Union for Conservation of Nature’s Red List of Endangered Species, the owners, who have not been named, will not be prosecuted because keeping bears is still legal in Vietnam.

The bears were rescued from their dark basement prisons underneath a clothing shop where the owners would harvest their bile.

Xuan, a male, was allegedly kept in the cage since 2004 when he was a cub. It is unclear how long the female, Mo, was held captive in the basement. But, it is believed to have been years.

Four Paws said that 372 bears in Vietnam are “still suffering in cruel conditions on bear farms or in private keeping.” The organization said their team that rescued the bears was left “speechless by the cruelty they encountered”.

“Their rusty cages were small and dirty, and there was no access to fresh air and poor ventilation in the windowless basement. Both bears were medically checked and cleared for the 9-hour return journey to the Ninh Binh Bear Sanctuary, run by Four Paws. Xuan and Mo will now receive the care they need to recover from the ordeal they had to suffer,” the organization said in a statement.

The sanctuary is home to about 40 Asiatic black bears, all of which were “not only victims of cruel bile farming before their rescue, but also of illegal wildlife trafficking”.

“Bear bile is used in Traditional Chinese Medicine (TCM) for thousands of years,” as per a research paper on Bear bile. “Modern investigations showed a wide range of pharmacological actions with few toxicological side effects. Pure compounds are used for curing hepatic and biliary disorders for decades. However, extensive consumption of bear bile has left them as an endangered species.”

“For the animals, this means a life of agony ending with the death of the bears on bear farms. Vietnam has a history of cruel keeping of bears but is also one of the countries in Asia to take firm legislative steps against the keeping of bears for bile extraction,” Braun said.

In 2005, the government launched a campaign to phase out bear farming in Vietnam through attrition.

All captive bears were registered and microchipped to ensure that no new bears enter farms. However, registered bears are in the care of bear farmers until they can be transferred to authorities.

Braun explained that since 2006, “it is forbidden by law in Vietnam to hunt, trap, possess, kill, sell, or advertise bear or bear products”.

“It is not forbidden to possess a bear if it is registered and is privately owned before the mandatory registration process introduced by the government in 2005.”

Speaking about whether the two bears will be able to integrate and socialize with the other bears at the sanctuary, Braun said: “From our experience with other bears we’ve rescued, this often works well, but of course, depends on the individual personalities of the bears. If animals are socialized, it always happens under the safest possible circumstances.”

There are 372 captives, endangered bears in Vietnam; the government must be made more accountable for phasing out bile bear farming, as decided in 2005.

“There are still farmers, especially in Hanoi, which remains a hotspot of bear keeping in the country. The farmers vehemently refuse to give up their animals. One can only assume that they are still abusing their animals for the bile,” Braun said.

The authorities are closely watching Xuan and Mo in their new home.

“Both of them have some health issues, especially gallbladder disease from repeated bile extraction. Xuan is also overweight, has liver disease, and his teeth are in terrible condition. Once they have calmed down and settled in, our team will perform thorough medical checks on them. We will take their steps of rehabilitation slowly and gradually and cater to their individual needs separately.”

Due to the decline in the population of black bears in China, South Korea, and Vietnam, the bile trade affects the bear population in America, states research on Bear bile and bile trade.

“Asiatic black bears in China, South Korea, and Vietnam suffer on bile farms, where they are kept in small cages and painfully ‘milked’ for their bile for the duration of their lives. Wild bears are also targeted, as their bile is considered more potent. As a result, American black bears, whose population is still healthy, are the new target of both legal and illegal hunting and trade of their parts,” notes the research.