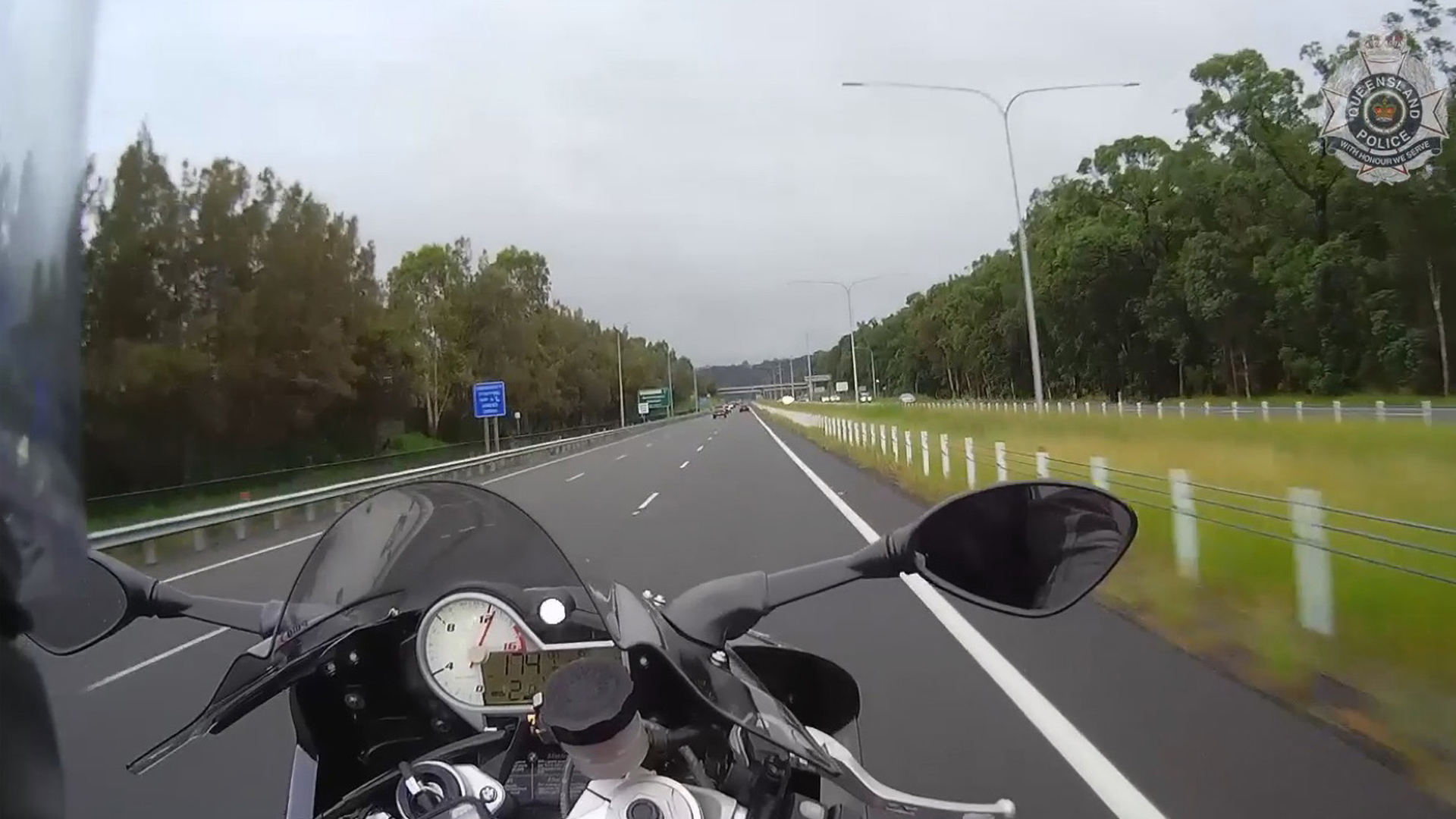 The suspect driving the motorbike at high speed while being chased by the police at Sunshine Coast in Queensland, Australia. (@QueenslandPolice/Newsflash)

SUNSHINE COAST, Australia — This video shows the moment a biker filmed himself through his helmet-cam, speeding at over 124mph and leading the Australian police to discover eight cannabis plants at his home.

The incident took place on the Sunshine Coast in the Australian state of Queensland, and the unnamed man has been fined AUD 17,000 ($12,999).

The Queensland Police Service shared the clip on their Facebook page, writing, “Sunshine Coast police have fined a man AUD 17,000 after seizing helmet cam vision which allegedly showed him performing high-risk stunts on a motorbike, including wheel stands at more than 200 kilometers per hour (124mph).”

The police spotted the BMW motorbike owner, 27, speeding in wet conditions on March 23.

Officers confiscated the suspect’s helmet camera and reviewed the footage, showing him riding recklessly through traffic on numerous occasions.

The footage reportedly showed the young man riding at speeds over 200kph (124mph) and performing a wheelie while traveling at 109kph (67mph) in a 60 zone.

The 27-year-old suspect is also accused of carrying out a wheelie while speeding at 201kph (124mph) on the Sunshine Freeway, where 100kph (60mph) is permitted.

A search of the man’s property the next day resulted in the officers finding eight mature plants of cannabis in his room.

Another review of the footage led the police to identify a total of 43 road offenses.

The suspect was charged with producing dangerous drugs, possession, and ten counts of reckless operation of a motor vehicle.

Authorities expect the man to appear at the Maroochydore Magistrates Court on May 10, 2021.

“There are already 21 families whose loved ones never came home this year after being involved in traffic crashes,” said Inspector Shane Panaho.

“Rider safety is everyone’s responsibility, but it starts with you as a rider. Your behavior on the road has direct consequences on your life and those around you,” he said.

The report also finds that two-thirds of road accident-related deaths happen in remote areas, with one-third occurring in major cities.

“These proportions have not changed over the decade. In terms of fatalities per population, the rate increases as the remoteness increases. The rate for remote areas is approximately double that of regional areas and ten times that for major cities,” the report notes.

As per the statistics on the United States road crash in the U.S., more than 38,000 people die every year in crashes on roadways.

“The U.S. traffic fatality rate is 12.4 deaths per 100,000 inhabitants. An additional 4.4 million are injured seriously enough to require medical attention. Road crashes are the leading cause of death in the U.S. for people aged 1-54,” the report states.