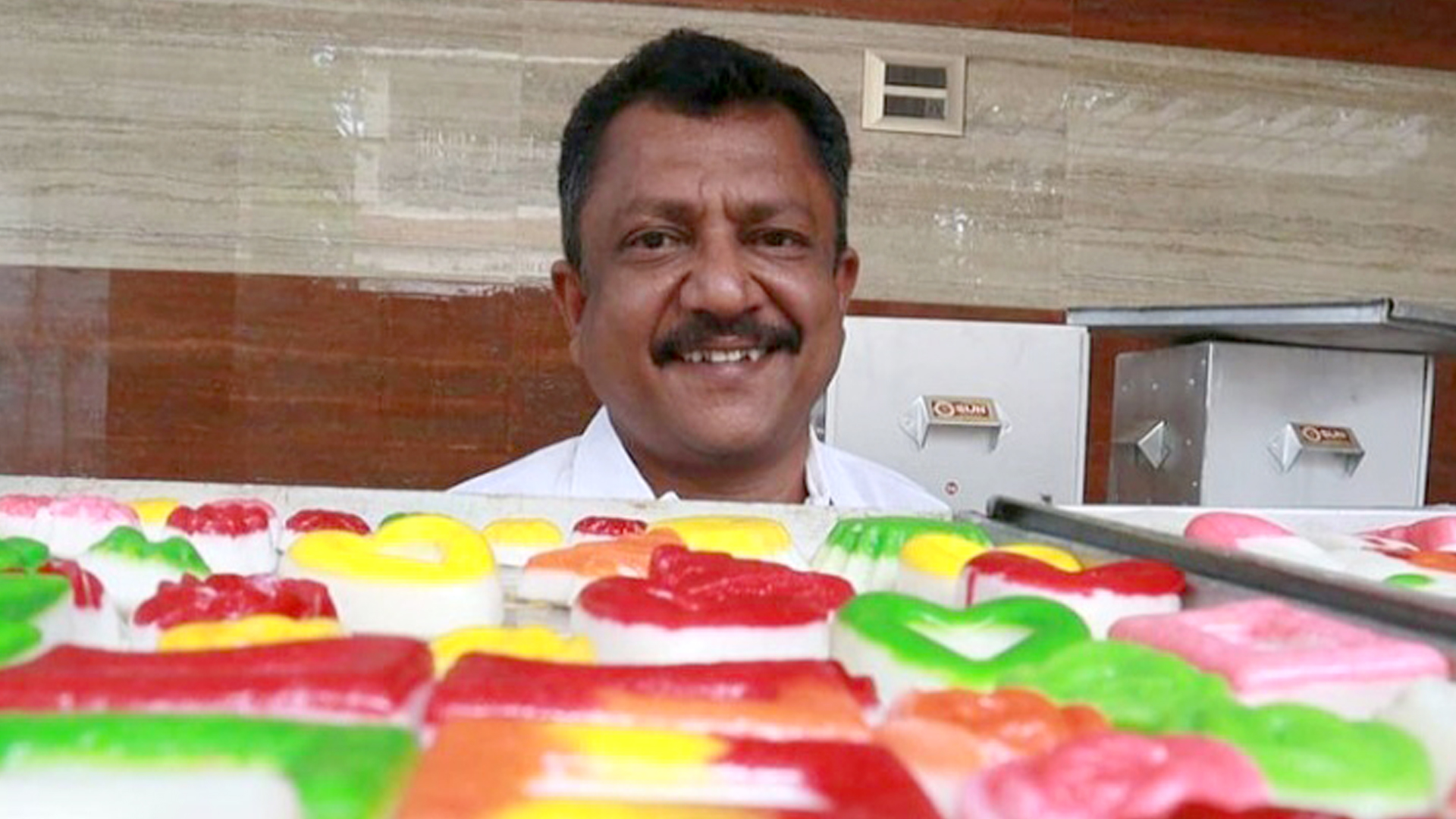 NEW DELHI — Fifty-one-year-old M. Eniyavan from Tamil Nadu in South India said he owes his life to idli, fermented and steamed rice-and-black-lentil cake, and one of the most popular breakfasts in the country.

“I was born to a very poor family with nine siblings in Coimbatore (in Tamil Nadu),” Eniyavan told Zenger News. “My father, who used to do seasonal manual labor jobs, found it difficult to feed his huge family. I went to school till class VIII mainly to get a free midday meal.”

Life had other plans for him, of course. After working as a seasonal fruit seller and at a tea shop, he started driving an auto-rickshaw and met Chandra one day.

“She used to make idlis. I sold her idlis to a shop once. Eventually, she got me a contract for idlis with which I was able to go to Chennai,” said Eniyavan. He started his idli business in the city in 1997, and since then, there has been no looking back.

Today, Eniyavan can make over 2,547 varieties of idli. He supplies the dish to caterers across Chennai under the brand name Mallipoo Idli. This passion for idli prompted him to conceptualize World Idli Day on March 30 in 2015, to “take the Indian culture across the world”. 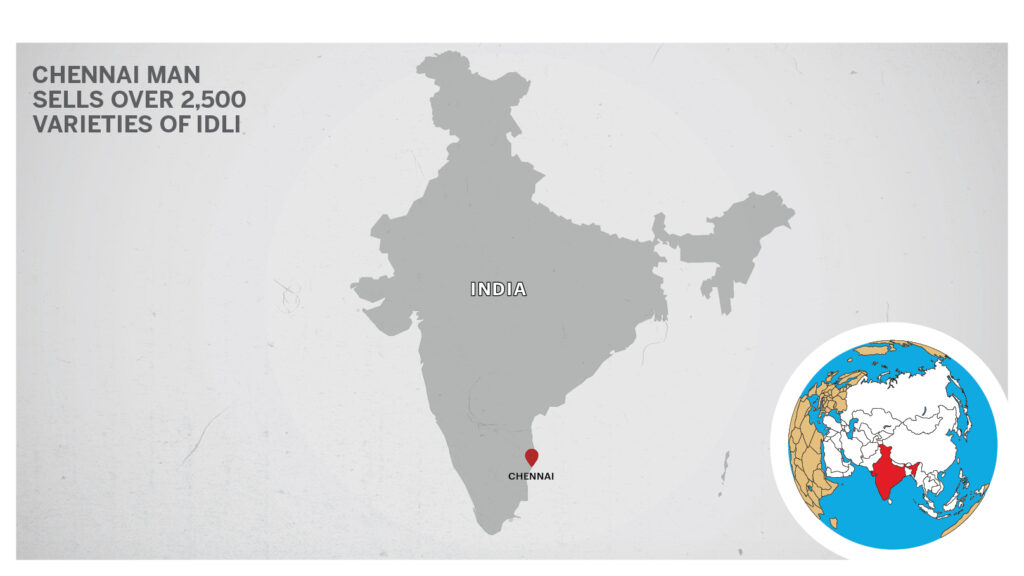 Idli is like his blank canvas on which he loves to create art. The ‘elaneer idli’ with tender coconut is his favorite. For children, there are variations like pizza idli sans the cheese but lots of vegetables, and the chocolate idli, which is idli with a generous smear of chocolate sauce. He also makes idlis in different shapes, such as a Mickey Mouse or a heart.

“I have seen all the ups and downs in my life with idli as my sole companion,” Eniyavan told Zenger News.

From being served at south Indian temples, weddings to shops in every nook and cranny in India, idli, perhaps, has its origins in the 7th or 8th century. In his book “Indian Food: A Historical Companion”, food historian K.T. Acharya talks about the first written mention of idli in Shivakotiacharya’s “Vaddaradhane”, a Kannada language work of AD 920.

In AD 1025, the poet Chavundaraya describes it unequivocally as black lentil soaked in buttermilk, ground to a fine paste, mixed with the clear water of curds, cumin, coriander, pepper, and asafetida, and then shaped.

In almost all references up to AD 1250, three elements of modern idli making were missing: The use of rice grits along with black lentil ground to a paste with water; the long fermentation of the mix; and the steaming of the batter for fluffiness.

Acharya, in his book “A Historical Dictionary of Indian Food”, wrote: “The Indonesians ferment a variety of products (soybeans, groundnuts, fish) and have a product very similar to idli called kedli.”

“It is suggested that the cooks accompanying the Hindu kings of Indonesia during their visits home between the 8th and 12th centuries AD brought fermentation techniques back to their homeland,” he wrote.

And so began the journey of what would eventually be called one of the healthiest breakfasts in India, often served with chutney (a ground mixture of coconut and spices) and sambar (steamed lentil and vegetables tempered with spices).

“If I think about it now, idli was one of the best meal preps,” Nandita Iyer, the author of “Everyday Super Foods”, told Zenger News. “Back in the days when there was no refrigerator or machines, women would hand grind the rice-lentil mix. They made batter once, and for three-four days, they were sorted.”

Delving deeper into why idli has always been a “convenient” meal and how every household has varying levels of sourness in the batter, she said: “We’ve heard old wives’ tales at our grandparents’ house on how everyone’s batter ferments differently. Now, I understand the science behind it. Each hand has its characteristics, and so the wild yeast development varies from person to person when [the mixing is] done by hand.”

And, it’s a versatile ingredient that can be used to make dosa (think crisp crêpes), uthappam (fluffy pancake topped with vegetables), or paniyaram (balls of the idli batter mixed with finely chopped vegetables and shallow fried).

She believes having lacto-fermented vegetables offers more benefits than their cooked versions, just like the rice kanji, which is popular in South India, where a bowl of rice is soaked in water and consumed the following day with buttermilk. The fermented rice is good for the gut and easy to digest.

Fermentation became quite a trend last year when people were forced to stay home. Social media handles were flooded with pictures of sourdough loaves, kombucha (a fermented, sweetened black or green tea drink), and even home-grown alcohol.

That’s when culinary researcher and food show director Shubhra Chatterji decided to conduct a three-day seminar called ‘Desi Cultures’ in August 2020. The premise was the realization of the wealth of fermented food in India.

“For several years, kombuchas, kefirs (fermented milk drink similar to thin yogurt), and all have been doing rounds as has sourdough,” Chatterji told Zenger News. “There is a leaning towards making your fermented stuff. Last year, I went to the Tons Valley (in the northern Indian state of Uttarakhand), where I spent a week. I was fascinated by the local dairy practices.”

“No one pasteurizes milk there. They leave milk in big vessels and curdle into yogurt, later used as butter and ghee. There my spouse reminded me that fermentation guru Sandor Katz had been to Tons Valley to study fermentation practices.”

“In every culture in India, we ferment — whether its dhokla (steamed savory cake made of rice and lentil batter) in Gujarat, idli or dosa in South India, amboli (version of rice and lentil pancake) in Maharashtra, pakhala (similar to rice kanji) in Odisha, panta bhat (version of fermented rice) in Bengal and even kasundi (sauce made of fermented mustard seeds),” Chatterji said.

Completely in awe of the rich culture of wild yeast in the country, she made a special mention of the north-east region and said: “If there’s ever any ‘Desi Cultures’ part 2, it would perhaps be dedicated to the north-east.”

“Whether it’s the fermented mustard, fermented bamboo, or the fermented soybean paste that you get there — there’s so much fermentation happening in the north-east.”

Fermented fish, too, holds a special place in the region, especially in Manipur. This has a lot to do with the geography of the area, perhaps.

“In one of our sessions of Desi Cultures, an expert spoke about fermenting fish in the Andamans. So, I believe in the Andaman and Nicobar Islands, they make a fish sauce. The ferment bits and bobs of fish to make a sauce,” Chatterji said.

Recently, Chatterji experimented with faaf, a local starter used to ferment alcohol, in Uttarakhand. She used Rhododendron flowers with jaggery and put some faaf into it. The result was a delicious flower preserve.

“I find the use of faaf very similar to the ranu tablets in Odisha to make the local rice beer called handia. It’s just that the base of handia is rice flour, and up north, it is wheat flour,” she said. They are similar to the rice beer in different north-east states, including apong from Arunachal Pradesh and Assam, or zutho from Nagaland.

While fermentation enthusiasts in India are unraveling the wealth of natural yeast in the country, Eniyavan is going strong on his quest to popularize idli.

On World Idli Day, which happens to be his birthday, Eniyavan, along with his wife, son, and daughter, usually puts an extravagant exhibition of idlis.

“But this time, due to the pandemic, things are a bit sobered down,” his 19-year-old daughter Jasmine said on behalf of her father, who only speaks in the Tamil language.

This year, Eniyavan will be exhibiting about 1,000 varieties at a hotel in Chennai’s T-Nagar.