Sayar Abdullah lost his right arm in a road accident when he was 12 years old. 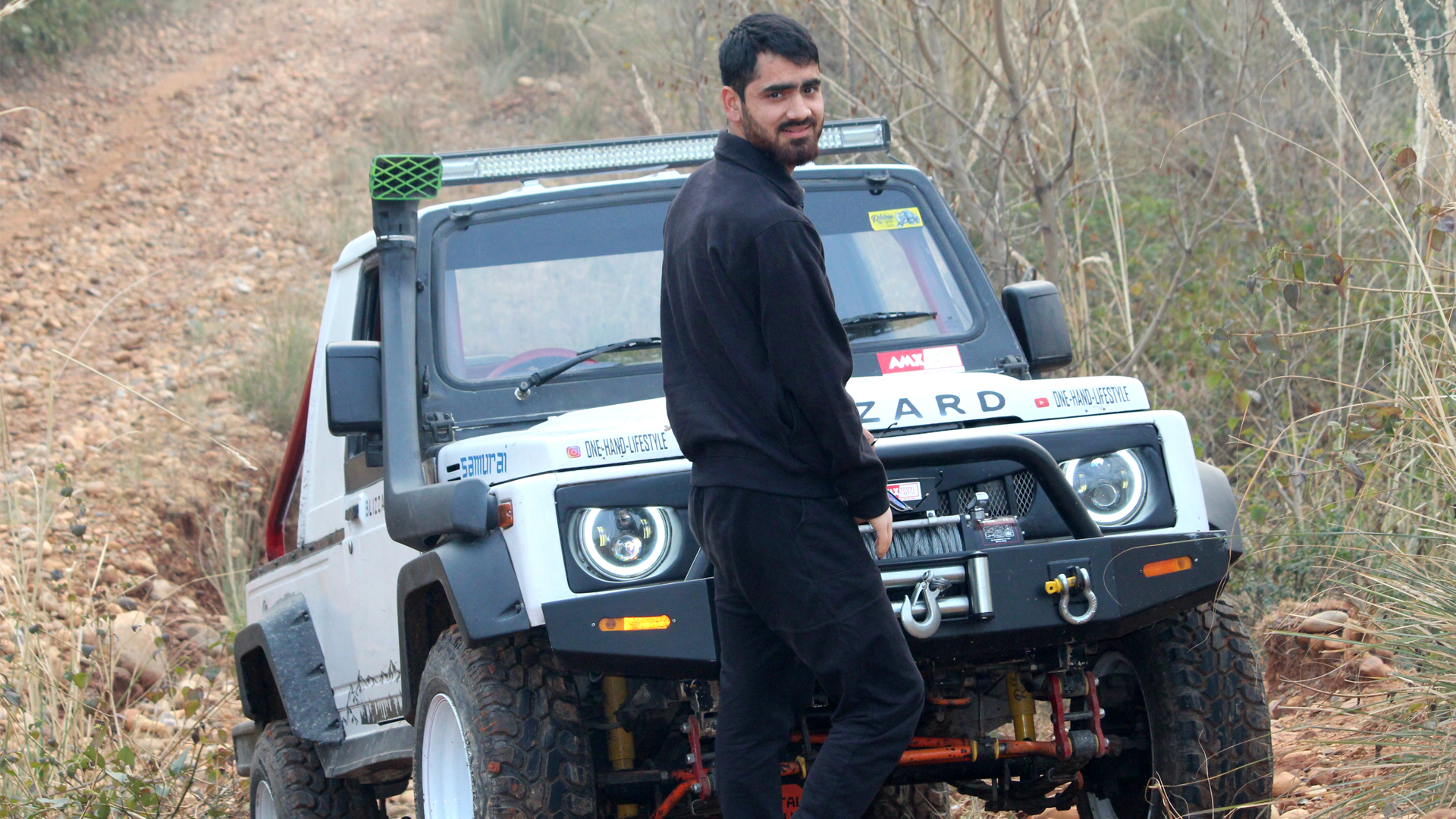 SRINAGAR — Sayar Abdullah, 24, dreams of becoming like Bartosz Ostalowski, a professional sport driver who drives with feet. But professional motorsport is a distant shore for this young man from Kashmir. The troubled political landscape of India’s northernmost region, as well as a personal disability, are proving to be hurdles for Abdullah.

When Abdullah was 12 years old, he met with a road accident. This resulted in the amputation of his right arm. He is from the Vessu village about 65 kilometers (40 miles) south of Kashmir’s capital Srinagar

“But that did not break my dream,” he told Zenger News. “I decided to learn to drive with one arm.”

While Abdullah did not get a professional trainer, his friend from school, Shafat Afzal, taught him to drive. 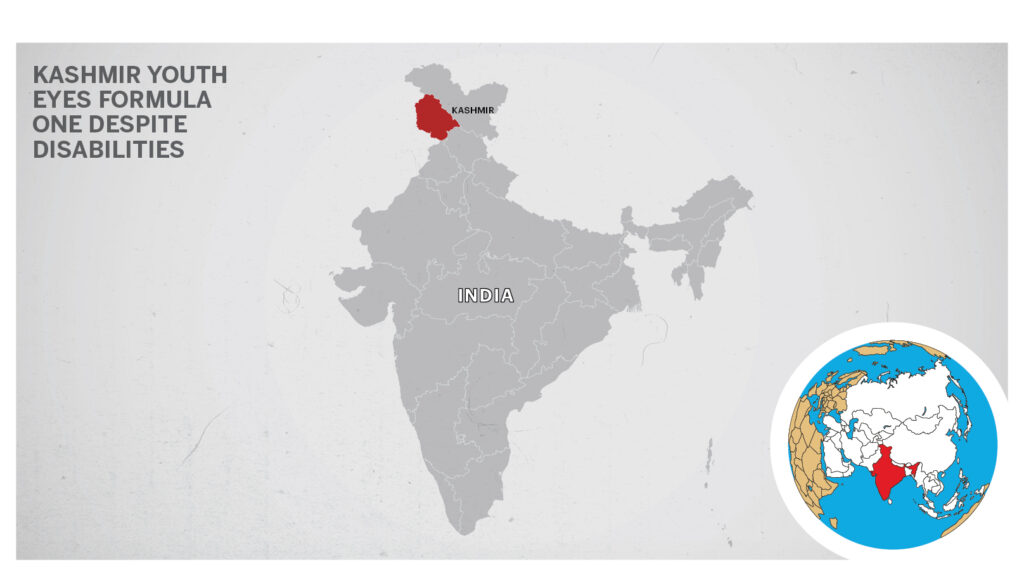 “I never had any doubt about his (Abdullah’s) ability and determination,” Afzal told Zenger News. “It was a gradual process, and we perfected different aspects step by step. Now, Abdullah is a seasoned driver.”

While the disability might prove to be a hurdle, Formula One has had drivers who have overcome disabilities to conquer the racing track. Robert Kubica, the first Polish driver to complete a Formula One race, suffered a crash at the Ronde di Andora rally in 2011. His right forearm had to be partially severed, and it was thought that he would have to give up racing.

But Kubica returned in September 2012 and went on to win several races and take part in Formula One events.

Abdullah claims to have explored the difficult mountainous terrain of Kashmir — a challenge for any sportsperson — despite his disability.

“Most recently, I explored the Bangus Valley,” said Abdullah, currently studying for a masters degree in law at NALSAR University of Law in the southern metropolis of Hyderabad.

At an altitude of 10,000 feet above sea level, Bangus is in the Kupwara district of Kashmir. It does not have an airport or railway station and is difficult to access.

Abdullah now wants to pursue driving as a professional sport. “My goal is to take part in driving competitions at the national level,” he said.

Though young people from Kashmir in recent years have brought home sporting laurels, the region — reeling from political disturbances for decades — has very little infrastructure to support the dreams of Abdullah and others.

India and Pakistan both claim the whole of the troubled Himalayan region of Kashmir but rule only parts of it. The two neighboring countries have gone to war several times over border disputes in the region, including clashes and aerial dogfights in February 2019, after a terror attack that killed about 40 Indian paramilitary personnel in Indian Kashmir.

The region has also had a militant separatist movement since the 1990s — India claims that Pakistan has supported many of the terrorist groups that operate in the region. India and Pakistan have also been accused of gross human rights violations in their parts of Kashmir.

In August 2019, Indian Prime Minister Narendra Modi’s government decided to abrogate Article 370 of the Indian constitution that gave a special status of the erstwhile state of Jammu and Kashmir. It also divided the state, bringing Kashmir under the direct control of New Delhi, and imposed a communications lockdown that was only recently lifted.

Political problems are only part of the many challenges that Abdullah faces — there are many others.

For instance, motorsport, which is an expensive passion to pursue, is not the most popular in the country. The sporting landscape is dominated mostly by cricket.

The Federation of Motor Sports Clubs of India (FMSCI), the governing body for motorsport in the country, was founded in 1971. But there is only one major Formula One track — the Buddh International Circuit in Greater Noida, an urban center that is part of India’s National Capital Region. The country began hosting the Indian Grand Prix in 2011, but it was suspended in 2013 over unresolved tax issues.

Besides Karthikeyan and Chandhok, India has not produced any Formula One star. In 2019, Aishwarya Pissay won the FIM World Cup.

Kashmir does have a fledgling motorsports scene. FMSCI-member Kashmir Off Road (KOR) organizes various rallies in the Himalayan region. Abdullah is a member of KOR.

“This sport is new to Kashmir. It will take some time before young people are motivated to join in,” said one of KOR’s founding members Ali Sajad.

India, which is a signatory of the Biwako Millennium Framework, has taken several initiatives to make society more inclusive of disabled persons. So has the government of Kashmir, which in 2018 passed the Jammu and Kashmir Rights of Persons With Disabilities Bill, to provide more opportunities for people with disabilities.

However, a lot remains to be done. India has around 26 million disabled people according to the Census 2011.

The Government of India’s Khelo India initiative, launched in 2017, aims to promote sports for disabled persons, but there isn’t anything specific for Kashmiri motorsport enthusiasts.

Repeated efforts to get in touch with Jammu and Kashmir Sports Council, the nodal body for promoting sports in the state, yielded no results.