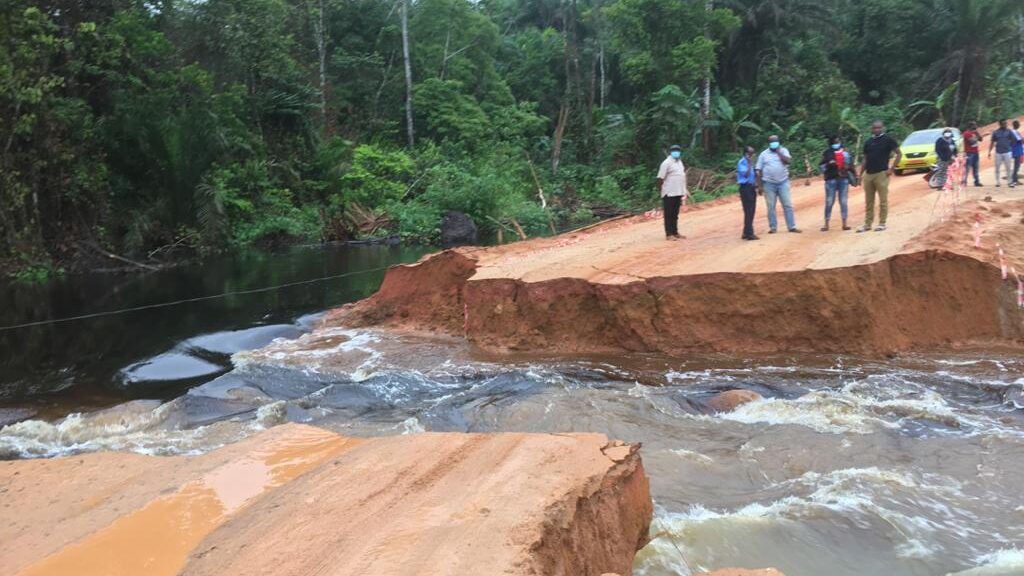 Torrential rains swept away a temporary culvert cutting off the Douala-Yabassi road linking towns in the Littoral Region of Cameroon on March 25. Traffic was restored hours later after repairs were made. (GPmedia)

YAOUNDE, Cameroon — Thousands of commuters on the Bamenda-Babadjou road network that links the Western and Northwestern regions of Cameroon were stranded for several hours last week after a section of the 35-kilometer (22-mile) dilapidated network collapsed following torrential rains.

Construction to rehabilitate the road network began in 2017 after the country received financial assistance from the World Bank. But work stalled for months during the long-running armed conflict between government forces and separatist militants.

“Work was advancing on the Babadjou-Bamenda stretch. But following attacks [by secessionist forces] on Jan. 8, 2021, the contractor notified us he couldn’t continue because of insecurity,” Public Works Minister Emmanuel Nganou Djoumessi told lawmakers during parliament’s March session, as members grilled the minister on why the road project had stalled.

Some travelers heading to Bamenda, capital of the Northwest Region, from the major cities of Yaounde, Douala and Bafoussam were forced to trek before boarding various vehicles to reach their destinations. Those who could afford it hired motorbikes at exorbitant costs.

“I carried my luggage while on the motorbike,” said Timothy Nfor, a student who was traveling to Bamenda. “I spent an additional $7.18 to complete the journey.

“I was not able to meet up with my engagements for that day,” he said.

The travelers who were leaving Bamenda had to wait for several hours until a section of the damaged road was partially repaired.

“We have decided to carve the section of the road into four. We have already mobilized national [road construction] companies to carry on with the works,” Djoumessi said after visiting portions of the damage.

“My appeal to fellow citizens situated in the work side is to organize themselves to protect the equipment and the technicians so that nothing should stop work. The commitment of President Paul Biya to construct this road is there,” he said.

The road forms part of the 443-km corridor linking Bamenda and the Nigerian town of Enugu.

A temporary culvert built to detour traffic along the rehabilitated Douala-Yabassi road in Cameroon’s Littoral Region was swept away by the rain, cutting off the road. No casualties were recorded, but traffic was stalled for several hours.

The Northwest Region, which has been rocked by the Anglophone conflict, is a major area for crops, such as Irish potatoes, rice, maize and vegetables. The poor road network in the region often hinders transportation of these staples to the rest of the country.

“We are in pain. This is a yearly occurrence,” said 44-year-old Janette Mbehtang, a vegetable retailer in Yaounde, the capital city.

Mbehtang, who has been in business for eight years, told Zenger News she lost eight bags of vegetables due to the Bamenda-Babadjou road collapse because the highly perishable good rotted during transit.

“I am now selling to make up for this loss,” she said.

“Vegetables are scare in Yaounde,” she said. “Suppliers in Bamenda hesitate supplying to us regularly for fear the goods will get bad on the way. When I am regularly supplied with vegetables, I could make up to $7.18 from the business daily.”

The Northwest and Southwest regions are inhabited mostly by Anglophone Cameroonians, who often complain about perceived marginalization by French-dominated centralized Cameroon — ruled by 88-year-old, for-life President Paul Biya since 1982.

Violence has torn through these two regions since common law lawyers and Anglophone teachers went on strike in 2016, protesting perceived attempts by the government to wipe out cultural values of the community, namely, common law and the Anglo-Saxon sub-system of education.

The conflict stems from Cameroon’s past, a German colony that was later split between France and Britain. French Cameroon gained independence in 1960, joined by English-speaking Cameroonians through a federation a year later, after a vote by the United Nations. In 1972, the English- and French-speaking sectors became one country, rather than being governed separately.