The Jarocho Harp: The Heavenly Sound Behind La Bamba 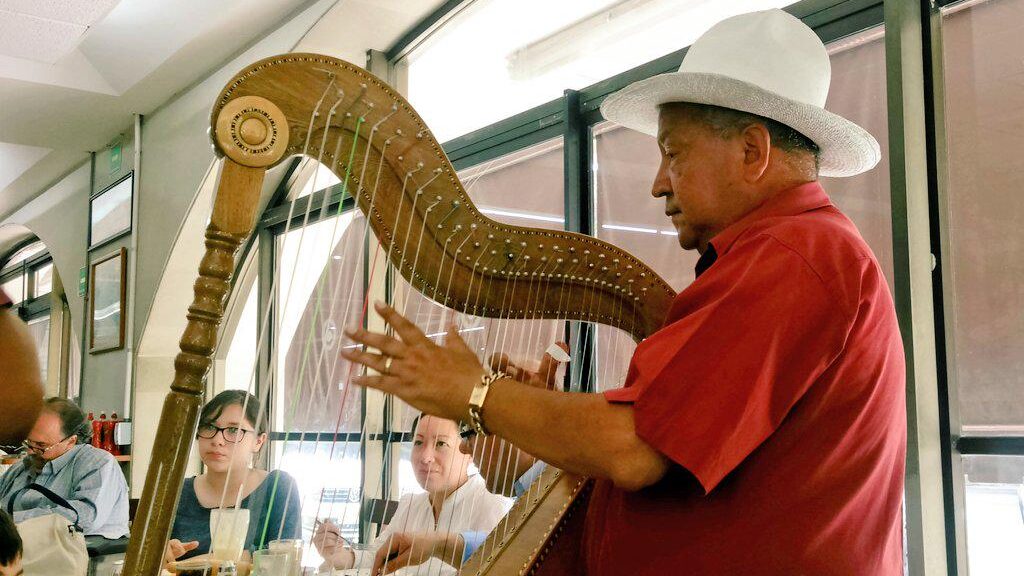 Son Jarocho is a rhythm that emerged during the colonial period combining elements from Spanish, Indigenous, and African cultures. Today, it is distinctive from the Mexican state of Veracruz. (Christian Valera Rebolledo/Café Words)

The music from the Mexican state of Veracruz has a distinctive instrument: the Jarocho harp, so named because Jarocho is the demonym for the people of the city-port of Veracruz.

“A large part of my life is the harp,” said Juventino Pérez Rosas, a 65-year-old harpist from Veracruz. “I have played it for about 35 years, which means that we share a history.”

The Spaniards brought harps and other instruments to this coastal town during the 16th century. Indigenous people embraced them. Later, with the arrival of African slaves, rhythms intermingled, giving birth to the now-traditional son Jarocho.

La Bamba is perhaps the most popular son Jarocho across the globe. But other songs are as catchy, including the “Son de la Iguana,” “El Colás” and “La Bruja.”

People from Veracruz dance to son Jarocho in fandangos, the regional festivals. Son Jarocho’s lyrics are called “pregones,” and Mexicans accompany them with a characteristic tapping.

Today, harp music is central to the Jarocho culture.

To play the harp, musicians use both their hands. They play the bass line with one hand, which gives the lower notes, while the other plays the melody in arpeggios combining higher notes.

“To play the harp, you must have musical skills, a good sense of hearing and speedy hands. The proper interpretation of a piece will depend on that [combination] because you can’t look bad in front of an audience,” said Pérez Rosas.

Harps are usually wooden and may have 26 to 36 strings. There are many types: Andean, Celtic, Paraguayan, classical — commonly used in orchestras — and the Jarocho harp.

The latter has gone through several stages of evolution, not only in its structure but also in the way harpists play it, including their posture. Back in the 1940s, the Jarocho harp used to be small. Later, it evolved into a larger instrument with more strings.

“The harp is not a Mexican invention. However, this is perhaps the place where we have scratched it the most and gotten the most out of it. No one can snatch that away from us,” said Pérez Rosas.

Great harpists from Veracruz — such as Andrés Huesca, the Barradas brothers, Nicolás Sosa and Andrés Alfonso — popularized son Jarocho across the rest of Mexico and worldwide during the 20th century through live performances, broadcasts, films and records. Of course, the popularity of the Jarocho harp went hand in hand with this movement.

“Veracruz, its folklore, the boisterous Veracruz, would not be understood without two instruments: the harp and the marimba, which often go together. They are both iconic [of our culture],” said Rosalía Duarte, 45, a housewife from Veracruz.

Although it has a long history and is closely related to other instruments, the Jarocho harp is easy to identify due to its size, sound and structure.

“You just go downtown and bump into someone playing the harp inside or outside any café. You immediately enjoy the music because you grew up listening to it. The harp is part of your culture, your history,” said Duarte.

Harps are widely popular in Latin America. They are part of the folklore of Paraguay, Peru, Venezuela, Mexico, Chile and Colombia.