Crypto art flips traditional art sale on its head. Will India’s digital artists get to be part of this trend? 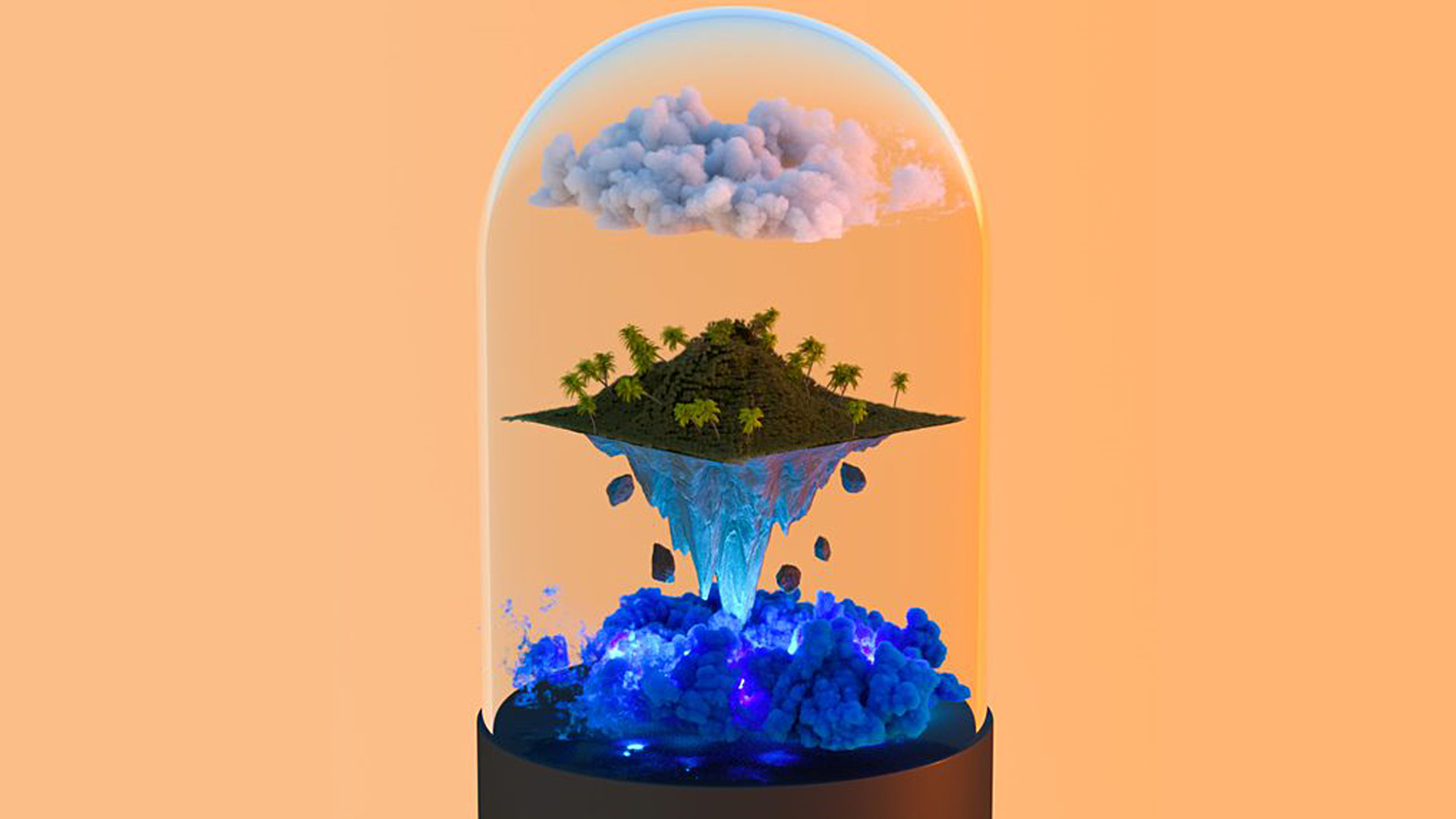 MUMBAI, India — Thirty-one-year-old Siraj Hassan is a software developer-turned-3D artist. He has had a passion for photography and videography since his college days, and it was around 2014 that he started dabbling with software such as Adobe Photoshop and Cinema4D.

Since December 2020, Hassan has monetized his artwork by selling it online uniquely. 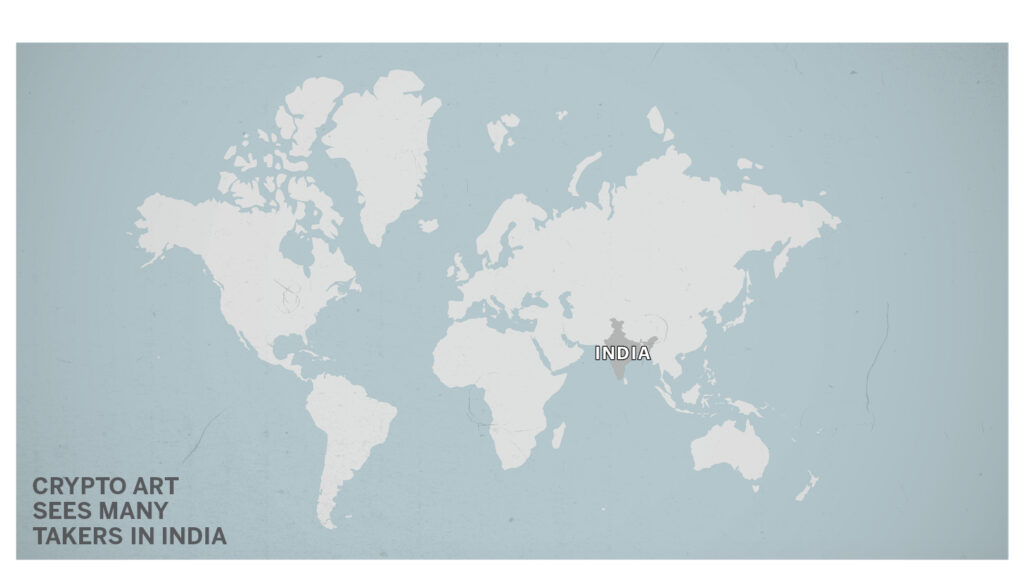 “Last October, he started posting about selling his digital artwork online for cryptocurrency. This intrigued me. After interacting with him, I learned about this concept of non-fungible tokens (NFTs), crypto art, and blockchain-based digital art platforms.”

Since then, Hassan has sold 27 of his 31 digital artworks of a series called Caged.

“Glass snow globes that would simulate snowfall once shaken would always fascinate me,” said Hassan. His abstract artwork builds on a similar concept and deals with themes such as melancholy, fantasy, serenity, among others.

NFTs became front-page news when auction house Christie’s managed to sell a JPEG of a collage of digital art by artist Mike Winklemann, more popularly known as Beeple, for a whopping $69 million.

This made Winklemann the third-most valuable living artist alive. An Indian duo Vignesh Sundaresan and Anand Venkateswaran bought the artwork.

An NFT is like a digital certificate that authenticates an artwork or any form of online media.

Fungible assets are something that can be exchanged and still hold value. For instance, a person can exchange a $100-bill for ten $10 bills, and the value will remain the same.

Non-fungible assets cannot be exchanged and are unique. For instance, there is only one Mona Lisa painting in the Louvre Museum in Paris. Of course, anyone can make a copy, but that won’t have even a fraction of the value of the original painting.

When a digital artwork is sold as an NFT, the artwork has only one unique owner who has purchased that token. The owner is registered on the Ethereum blockchain, which is where a majority of the NFT transactions happen. As this digital art is bought and sold using cryptocurrency and the underlying blockchain technology, it has garnered the moniker of “crypto art”.

Since it’s digital artwork, it can be viewed, downloaded, made copies of. But only the buyer of the original NFT can resell it. Think of NFTs as a digital equivalent of collectibles. To go back to the Mona Lisa analogy, think of the Louvre having a signed copy of the painting; NFT attached to a digital artwork is like having the artist’s signature on the work.

From an artist’s perspective, NFTs can let them set their artworks’ price, avoid middlemen, and enter smart contract terms such as royalty percentages for future sales.

Aparajita Jain, the founder of India’s first blockchain-based art platform, Terrain.art, is planning to add an NFT module to her platform on April 12.

Aparajita told Zenger News that Terrain.art has signed up many Indian artists who major galleries in India do not represent. Among the numerous problems facing the Indian art world, Jain believes a lack of transparency is a major one.

“I feel blockchain can immediately solve the issue with fakes as buying and selling artworks becomes immutable and traceable,” said Aparajita.

It’s not just artworks being sold as NFTs. Musician Grimes sold some of her music videos as NFTs. The creator of the famous Nyan Cat GIF (which completed 10 years in 2021) sold a special edition of the GIF as an NFT for 300 Ethereum or around $478,000. Kings of Leon has put up their latest album for sale as an NFT as well.

Even the first ever-tweet by Twitter co-founder Jack Dorsey got a buyer for $2.9 million worth of ETH. Jain believes Dorsey’s first tweet is of value as Twitter is a historical product of our times.

“Something that has value can be made a scarce commodity. NFTs will unleash scarcity, which comes with an inherent value,” she said.

“The fact that no one can replicate art, and that one can track every move and transaction of any art piece has made the art world sit up and take notice of the potential of NFTs,” Darshana told Zenger News.

“If you are an avid art collector, you will have dealt with privacy, verifiable ownership, portability, and tokenization. With NFTs, you can say goodbye to all these hurdles.”

Aparajita believes digital art didn’t grow exponentially earlier as there was no way to know if the owner would be the only one with the original work.

Darshana believes it is a bubble for those riding the wave as a “get-rich-quick” tactic. She said NFTs have ensured that we see the world as “one global marketplace for art”.

But Aparajita believes the massive spike in the value of cryptocurrencies is a major reason why NFTs are suddenly in the news as it’s a good investment for those who have enough cryptocurrency.

“This isn’t a bubble,” she said. “Artwork that’s not good will filter out, but NFTs will continue to grow.”

While Hassan believes that the NFT trade has become a bubble since the sale of the Beeple artwork for $69 million, selling digital artwork “isn’t as simple as just putting it up online”.

“I use open-source exchanges such as OpenSea.io and Rarible to sell my artwork,” said Hassan. “But these sites have strict policies and checks before an artist is taken onboard. Once I am verified, I have to convince buyers to purchase my work via interactions on the Discord servers (which is like a messenger platform) of the exchanges.”

“In a sense, it is the community that drives the sale.”

It took Hassan three-and-a-half weeks to sell his first work. To put up his work for sale, Hassan needed an Ethereum wallet, which was available in the form of a Chrome plugin he had to download.

“At the start, I had to invest around $60 equivalent of Ethereum per upload just to have my art showcased on the platform,” said Hassan.

As per Hassan, given the buzz around NFTs and the associated crazy valuations, scamsters are also in on the game.

“One of my works got posted on OpenSea. It was taken down after I reported it. There are many scams around NFTs and the buyer has to be extremely careful about verifying the artist. Collectors should ensure they purchase only from verified accounts,” said Hassan.

While these artists get paid in cryptocurrencies such as Ethereum, news outlets still report such sales in its equivalent US dollar pricing. When it comes to cryptocurrency, the Indian government has been giving mixed signals.

“The Cryptocurrency and Regulation of Official Digital Currency Bill, 2021,” is yet to be tabled in the Indian parliament, but in 2019 another draft called for the banning of cryptocurrencies.

In its official documentation regarding the 2021 Bill, the government states, “The Bill also seeks to prohibit all private cryptocurrencies in India. However, it allows for certain exceptions to promote the underlying technology of cryptocurrency and its uses.”

In mid-March, India’s Finance Minister Nirmala Sitharaman said the government would “allow a certain amount of window for experimentation” for cryptocurrencies.

The Ministry of Corporate Affairs released a notification on March 26 mandating corporate entities to disclose their crypto transactions and holdings to make tax filing more transparent.

“It is a good sign that India is moving towards more acceptance and awareness amongst the mainstream markets and regulators,” said Sohail Merchant, chief executive of cryptocurrency exchange PocketBits. The firm is a member of the Blockchain and Crypto Assets Council of the Internet and Mobile Association of India.

“This would help in shaping the crypto-assets market, leading to its growth. It is in a positive direction and would bring transparency, legitimacy, and structure to the industry,” Merchant said.

NFTs are, in essence, a form of crypto asset. How could the Indian government’s regulatory stand affect NFTs?

“If the NFT space has to survive in India, transactions have to be done in INR,” said Darshana. “If the government fails to create a proper framework regarding this, India is going to lose out because we are one of the best places in the world for art and culture. NFTs provide a great opportunity for Indian artists to go global.”

“If the government wanted to ban it, they would have done it,” Darshana said. “The fact that the government realizes the potential of cryptos and the numerous opportunities it can create is encouraging.”

Aparajita believes the government just wants to avoid any potential of shadow banking that may arise due to cryptocurrency. “There is a lot of speculation around what the government will or won’t do. We will have to wait and see,” she said.

Meanwhile, Hassan is in touch with his tax consultant and feels as long as he is upfront about his income through the sale of his digital art as an NFT, he “should not be worried”.