VIDEO: No Fuel Like An Old Fuel: Tragic Gas Station Stand Off Between Armed Senior And Police

79-year-old driver gunned down in his car after opening fire on officers. 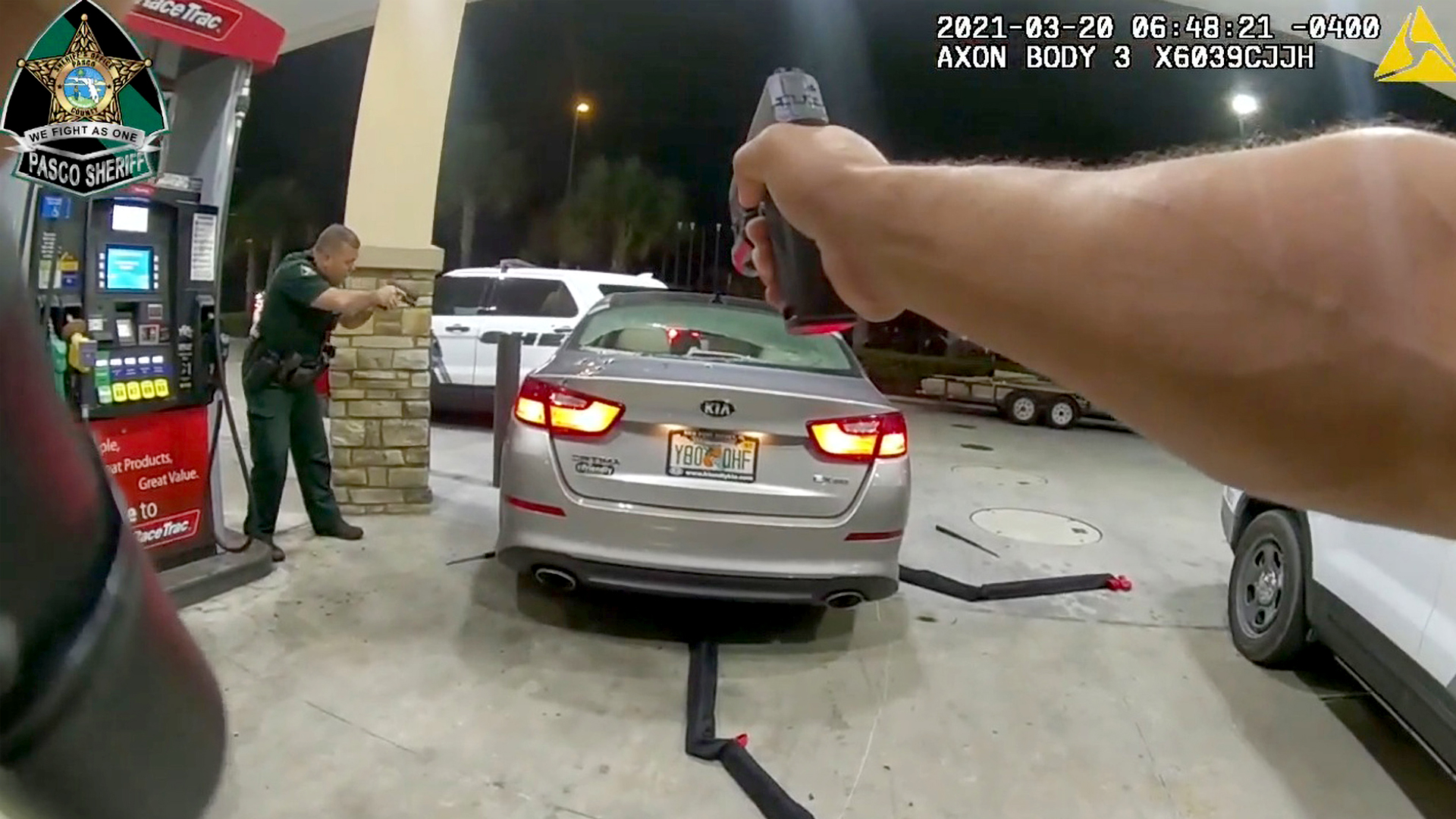 Police officers pointing their guns at the suspect. (pascosheriff/Newsflash)

HUDSON, Fla. — This is the moment U.S. cops shot a 79-year-old man who drove into a petrol station, threatened to kill people there, and fired at officers with their firearms raised.

The incident took place in Hudson in Pasco County in Florida on March 20.

As per the reports, the elderly man drove into a RaceTrac petrol station and told an officer he wanted to kill people.

The body-cam footage shows officers pleading with the elderly to put the gun down after a reported 40 minutes of talks that included a hostage negotiator.

The police also placed stop sticks on the ground in front of the suspect’s vehicle to prevent him from driving away.

At one point, an officer was seen trying to smash the driver’s window to reach inside and end the standoff peacefully.

However, the elderly man, referred to as James in the clip, drove forward and rammed a cop car before allegedly shooting at officers trying to enter his vehicle.

The Pasco Sheriff’s Office said on Facebook that officers spoke with the suspect “to deescalate the situation, in which the suspect stated he would hurt himself and others while setting up stop sticks to prevent the vehicle’s continued travel”.

“Additionally, it shows the suspect being pepper-sprayed while deputies attempt to get the suspect to put down the firearm he was holding,” the police continued.

“It also shows the suspect ramming into a patrol car, as well as the moment the suspect fired at deputies and deputies, returned fire.”

No officers were injured in the incident and the elderly suspect was taken to an intensive care unit in a nearby hospital.

“We are proud of the efforts our members took to deescalate this situation and the professionalism they demonstrated,” the Pasco County Sheriff’s Office wrote on Facebook.

In recent years, particularly since the fatal shooting of Michael Brown in Ferguson, Missouri in 2014, police brutality has become a hot-button issue in the United States.

The number of homicides committed by police in the United States is often compared to those in countries such as England, where the number is significantly lower.

The trend of fatal police shootings in the United States seems to only be increasing, with 132 civilians having been shot, 16 of whom were Black, in the first two months of 2021.