Terrifying stand-off with officers after suspect armed with a hammer and knives threatened to slash his own throat. 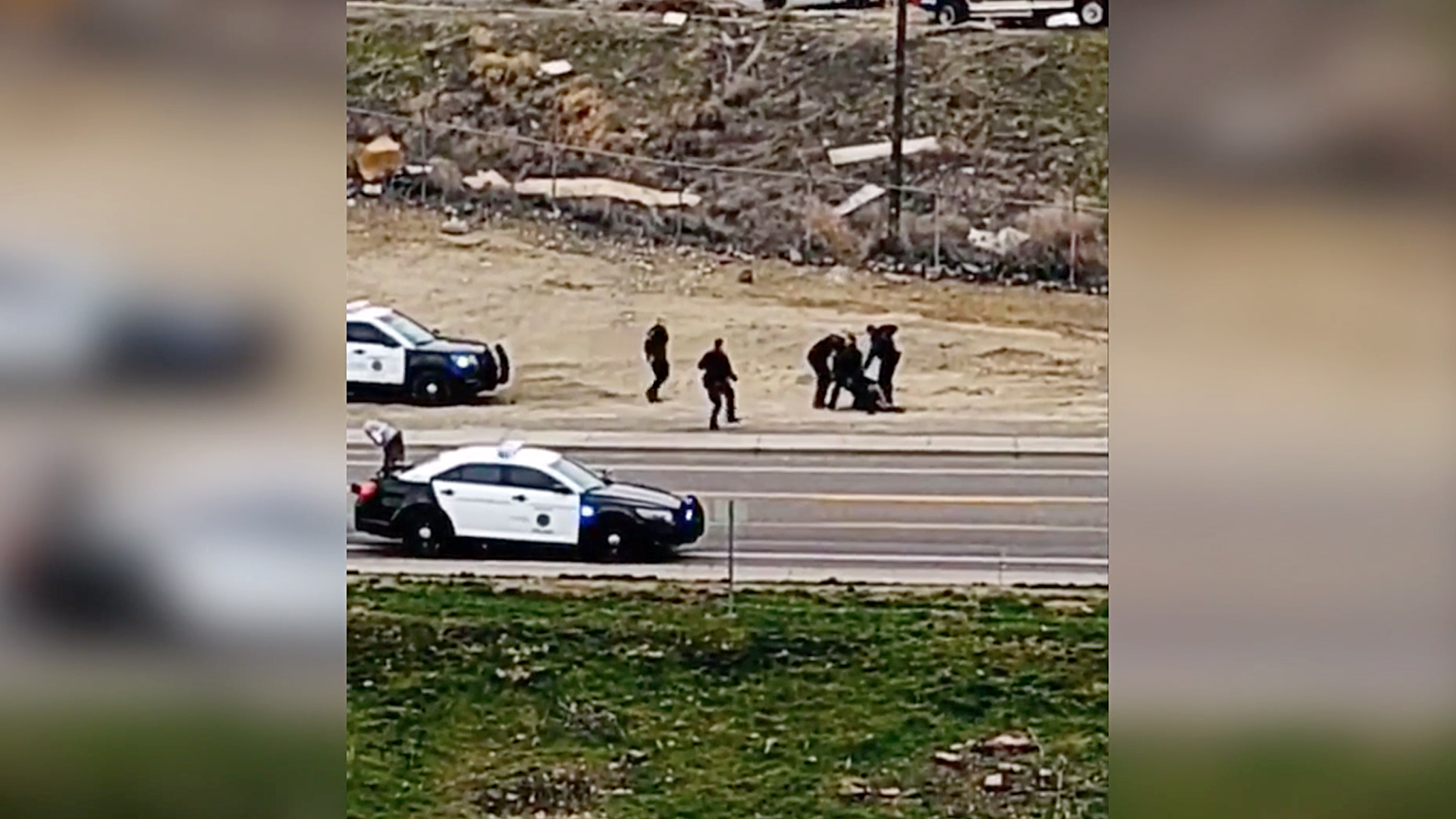 Kennewick police shot a man with a rubber bullet after he chopped down a door and threatened to kill his wife. (Kennewickpolice/Clipzilla)

KENNEWICK, Wash. — Officers used a rubber bullet to safely arrest a man who held a knife to his throat and refused to surrender after his terrified wife reported him for threatening to kill her and their four children on March 24.

The incident took place at 130 South Conway Place, in Kennewick, Washington. Officers from the Kennewick Police Department were dispatched to the location after receiving a 911 call from the man’s wife. She was reportedly crying while hiding in a closet.

“Dispatch could hear a female caller crying and not talking on the phone while a male voice was cursing in the background,” said Kennewick Police Department in a Facebook post. “The line then disconnected. Soon after, an additional citizen called 911 to advise that 32-year-old Seth Pearce was attempting to chop down the door.”

Upon arrival, the officers could quickly locate the woman and her young children, aged three to ten, and take them away to safety. Pearce was armed with a hammer and was intending to kill the victim while breaking into the home.

Police said he escaped through a back window of the apartment when they arrived at the scene.

“Pearce also armed himself with a large hunting style knife in his other hand and was displaying both as he disregarded officers commands,” said the police. “Officers attempted to deescalate the situation while following Pearce on foot, giving him numerous commands to comply.”

“Officers followed him on foot from the location on S Conway down to W 4th Ave where he crossed the highway and then continued on W 4th Ave.”

Pearce kept trying to keep the officers away from him; he even went so far as to put the knife to his throat, threatening to take his own life. Officers then used less-lethal munition, which effectively knocked Pearce to the ground and separated him from the weapon. The police were able to safely detain him after this.

Kennewick Fire Department medics rushed to the scene for an initial examination of the suspect.

He was then taken to a hospital before he was released and jailed on Criminal Threats-Domestic Violence charges, Malicious Mischief-Domestic Violence, Obstructing Public Servant, and Resisting Arrest.

“We are grateful that the victim and her children are safe today and that this incident was resolved without the use of force,” said the police. “We have worked with our partners at Lourdes Crisis and the Mobile Outreach Program who will be following up in the Jail to offer mental health services.”

“For both the property crime rate by state and the violent crime rate in US states in 2018, New Mexico and Alaska saw the highest rates, while states in New England generally saw the least,” states the report.

“Washington DC technically topped both crime rate lists; this is a misleading result due to its strictly urban geography; comparison to the violent crime rate of US cities sees Washington DC far behind places such as Detroit and Memphis.”