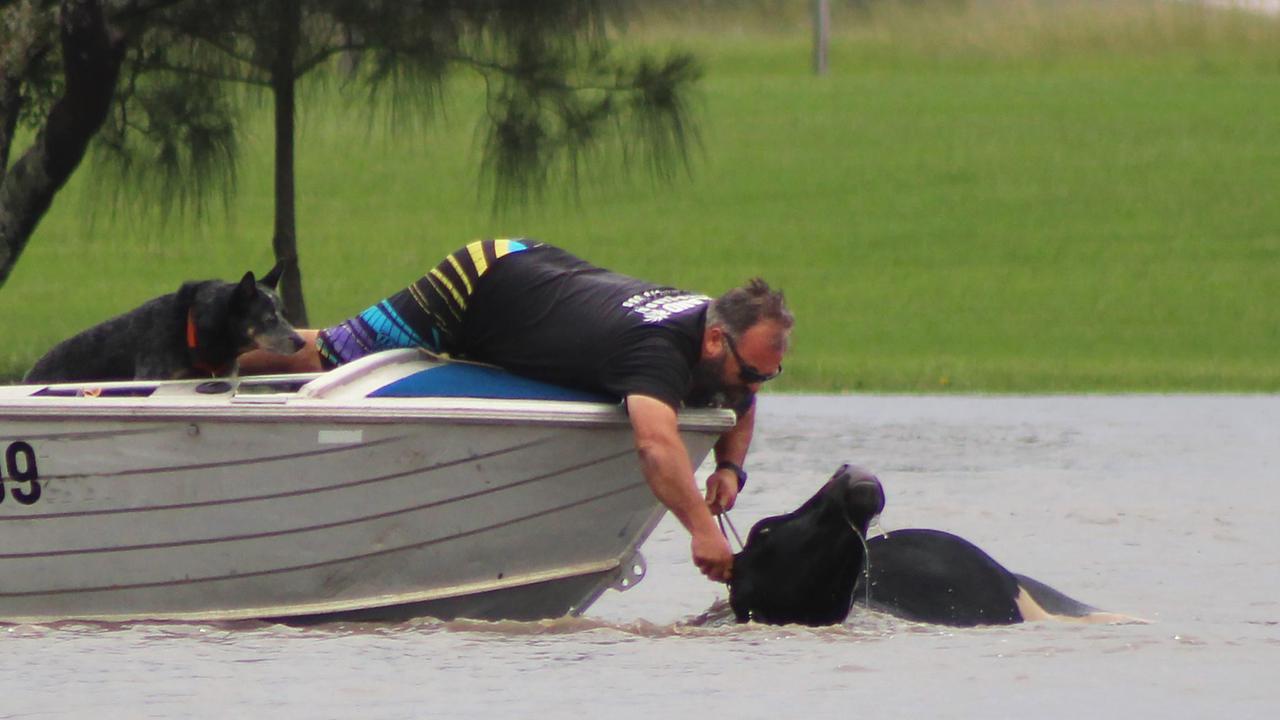 The floods that have drenched swathes of New South Wales have cost farmers tens of millions in livestock losses. (AAP Image)

CANBERRA, Australia — Farmers pushed to the brink by successive drought and bushfire disasters have now lost tens of millions of dollars in cattle in horrific circumstances on the New South Wales mid-north coast in Australia.

Wauchope veterinarian Michael Ferguson and his team have spent the past few days putting down animals left, right, and center.

Nearby Port Macquarie was among the locations the hardest hit, with floodwaters in the Hastings and Camden Haven rivers reaching record levels and inundating parts of the town.

More dead livestock will be found as the waters recede.

“I spoke to a friend of mine, and he had 50 cattle or so on the Maria River,” Ferguson.

“He’s expecting he might find about five of those left, which is pretty devastating.”

“The floodwaters came quickly and strongly,” he said, “and many cattle were washed away.”

Some miraculously survived, like a calf rescued from a beach in Taree, which copped its worst flooding in almost a century.

Ferguson said he’s heard of a cow washing up alive at Little Beach in Bonny Hills, about 20 kilometers (12.4 miles) from the Hastings River mouth.

“That’s a heck of a long way for them to be able to stay afloat, swim, and survive,” he said.

Most don’t, drowning or dying of hypothermia and exhaustion.

Even livestock that wasn’t carried away is at risk. They’re exhausted and uncomfortable, at risk of infection and pneumonia, and there’s a shortage of some medications to treat them.

“We try to identify the ones that you can make a difference with,” Ferguson said.

“At the same time, we have to be very pragmatic and decide this one’s not going to make it. That’s not easy.”

It is incredibly distressing for the farmers too, he says, many of whom still bear the mental scars from years of drought and the Black Summer bushfire disaster.

“It’s from one extreme to the other,” he said.

“It will be tens of millions, if not higher in the end,” he said.

It’s not just stocked farms either — most farms in the area will have lost vital, expensive infrastructure needed to keep them running.

Product has been ruined, too.

Avocado farmers are facing the prospect of their water-logged trees dying, the cold and wet conditions are delaying pollination on berry farms, and many oyster producers will now miss out on the Easter boom because of the muddy, polluted waters.

“It is a major blow for farmers already at the brink,” Arkle said.

New South Wales Farmers has launched an appeal to raise money for those in the area to rebuild and recover.

“What we’re now experiencing is that further crisis on top of an already really tough couple of years,” he said.

“The human side of this recovery will be as important if not more important than repairing the physical stuff on farms.”

Donations can be made through the New South Wales Farmers website.