VIDEO: Is Someone Taking The Piece? Man Does World’s Biggest Jigsaw Only To Find Last Bit Is Missing 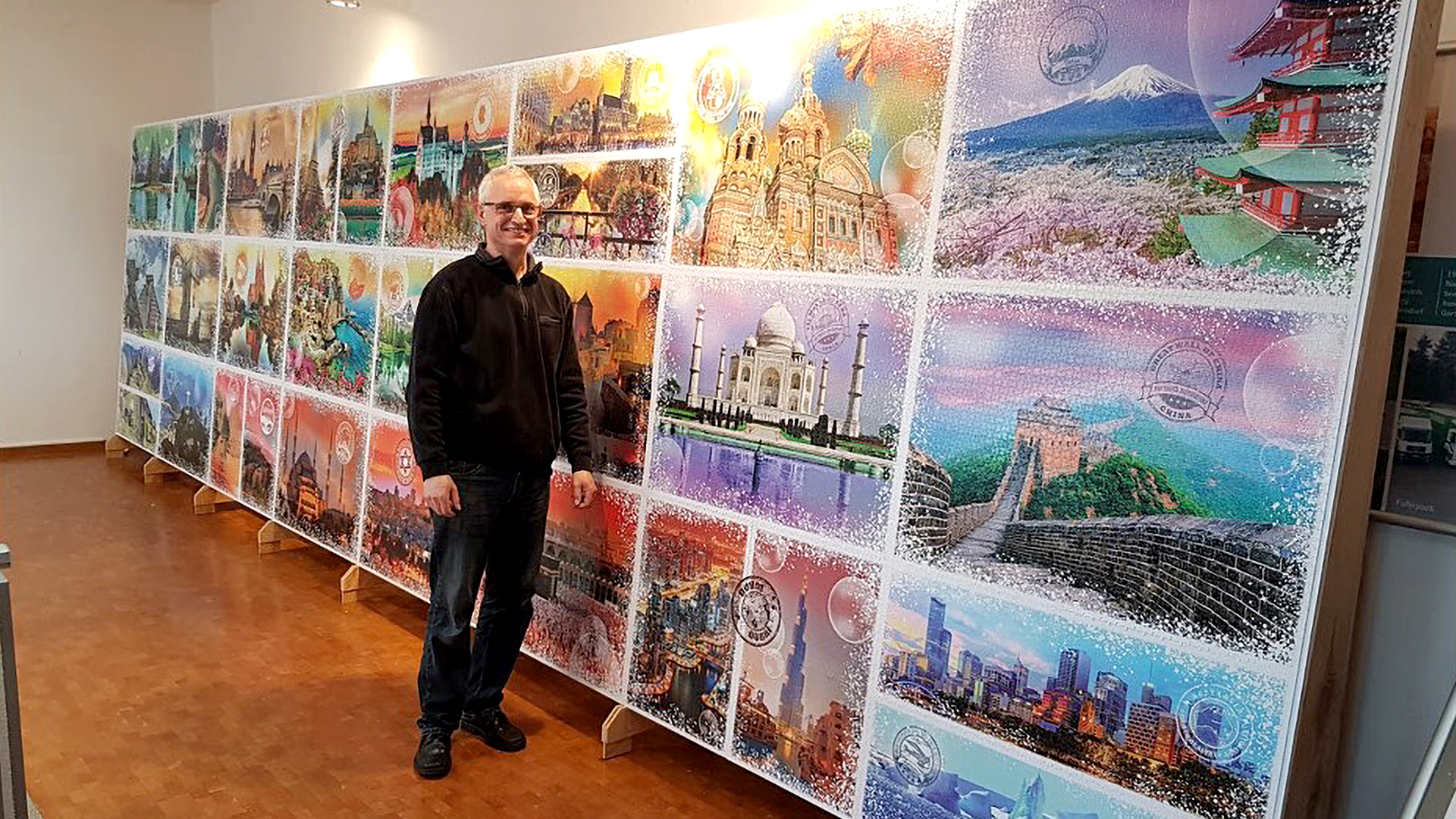 Peter Schubert from Hallerndorf, standing next to the 48,000-piece puzzle he solved. (Peter Schubert/Zenger News)

SALZGITTER, Germany — A puzzle enthusiast in a Guinness World Record bid to complete the world’s most enormous jigsaw with 54,000 pieces was left shocked after realizing the final piece was missing.

Peter Schubert, 52, from Hallerndorf, a municipality in the Upper Franconian district of Forchheim in the southern German state of Bavaria, said that he is a true puzzle devotee and a very patient man, something that according to him is essential when solving puzzles with thousands of pieces.

He explained how his fascination with puzzles began 17 years ago when he came across a puzzle in a bookstore that had thousands of pieces.

“I saw something that would go on to take my whole life in a completely new direction. A 20,000-piece jigsaw in a huge box,” said Schubert.

He did not buy it at first, placing it back on the shelf after much internal dilemma and leaving the shop with his head full of thoughts about the 6-square-meter (64-square-foot) puzzle.

However, tempted by the idea of solving the 20,000 piece monster, Peter went back to the bookstore the following day, hoping his object of interest was still there.

The puzzle he bought was the largest on the market at the time, and it left him frustrated as he struggled to put it together. Storing it away in his basement did not help put his thoughts to rest, so he decided to try a different method, which resulted in success a year later.

“It was the most difficult puzzle of my career. The frame alone had over 3,000 identical pieces in uniform beige.”

Schubert has solved around 60 puzzles, including 3D, holographic (two mysteries in one), and small puzzles. His collection of ‘conquered’ puzzles ranges from 18,000-piece ones to the one he has (very nearly) just finished, Grafika’s ‘Travel Around Art,’ a 54,000-piece jigsaw.

Grafika, the company behind the 54,000-piece jigsaw, was established in 2013 in France. Their 6,000-square-metre (64,583-square-foot) production warehouse is located on the border between France and Germany to ensure low EU delivery costs. Since its inception, the company has had a turnover of EUR 11 Million (USD 12.9 million) for 30 employees.

In an exclusive interview with Eric Lathiere-Lavergne, President of the company which produces the Grafika jigsaw brand, he confirmed that the small French manufacturer aims to build even larger jigsaws.

Their goal is to become the world’s second most crucial puzzle producer, right behind the German company Ravensburger.

The “Travel Around Art” jigsaw is delivered to 26 countries worldwide. It is also available for sale in the US, Canada, and the UK.Peter Schubert said the puzzle was quite the challenge, adding: “It took me four and a half months to complete the largest puzzle in the world. I started by solving it by completing 10 individual 1,000-piece parts of the overall puzzle and, as an athlete, trained my stamina, my eye for detail. I made a plan for how I wanted to proceed.”

After solving the puzzle, the Guinness World Records applicant was shocked to find out there was one piece missing. He even checked the vacuum cleaner, hoping to find it inside.

However, it was not there, so he contacted the manufacturer to send him the missing piece.

Having gone through a divorce about 12 years ago, he stated that being single and not having marital responsibilities helps him organized a schedule for solving a puzzle. This completely changes his everyday routine for some time because everything else revolves around the task.

The ‘Puzzle King’, as he has been dubbed in Germany, said: “I invest 4 to 5 hours a day before and after my shift on weekdays, and I usually take a day during the weekend where I spend 14 hours on the puzzle.”

The professional fitter, who works in home decoration and construction, has a personal record of spending a whopping 15.5 hours on a puzzle in one day.

Whenever he needs a break, he likes to take a short walk to take his mind off the puzzle, which he goes back to as soon as his focus returns. But he refuses to accept any help from anyone.

Schubert believes that solving puzzles has had many positive effects on his health and life, including achieving a balanced state of mind and ending up with a beautiful picture to show off.

He said that ironically, his greatest challenge was a tiny, 1,000-piece ‘all black’ puzzle delivered from Japan. He explained how his hardships with it stemmed from the puzzle’s lack of concept.

“Some tips from me, if you have problems with black, the same one is also available in white.”

He said that puzzles bring order where there was chaos and help train people’s problem-solving skills.

“Imagine you have a problem, and you cannot solve it quickly. It grows and grows, but only in your own head. In real life, it remains the same.

“But thinking about it blocks you from finding a solution. You are then immediately overwhelmed, you experience pure stress, and many people turn to medication or alcohol. You first get numb, but that pushes the problem backward. It won’t solve it. On the contrary, a new one may be added.”

“I am already at 430,000 pieces, which would result in a total area of 130 square meters. I am proud of it, considering I work full-time. Puzzles are a real-time killer.”