The suspect knocked one of the officers on the ground and attempted to kill him.
By Lee Bullen March 27, 2021
Facebook
Twitter
Linkedin
Email 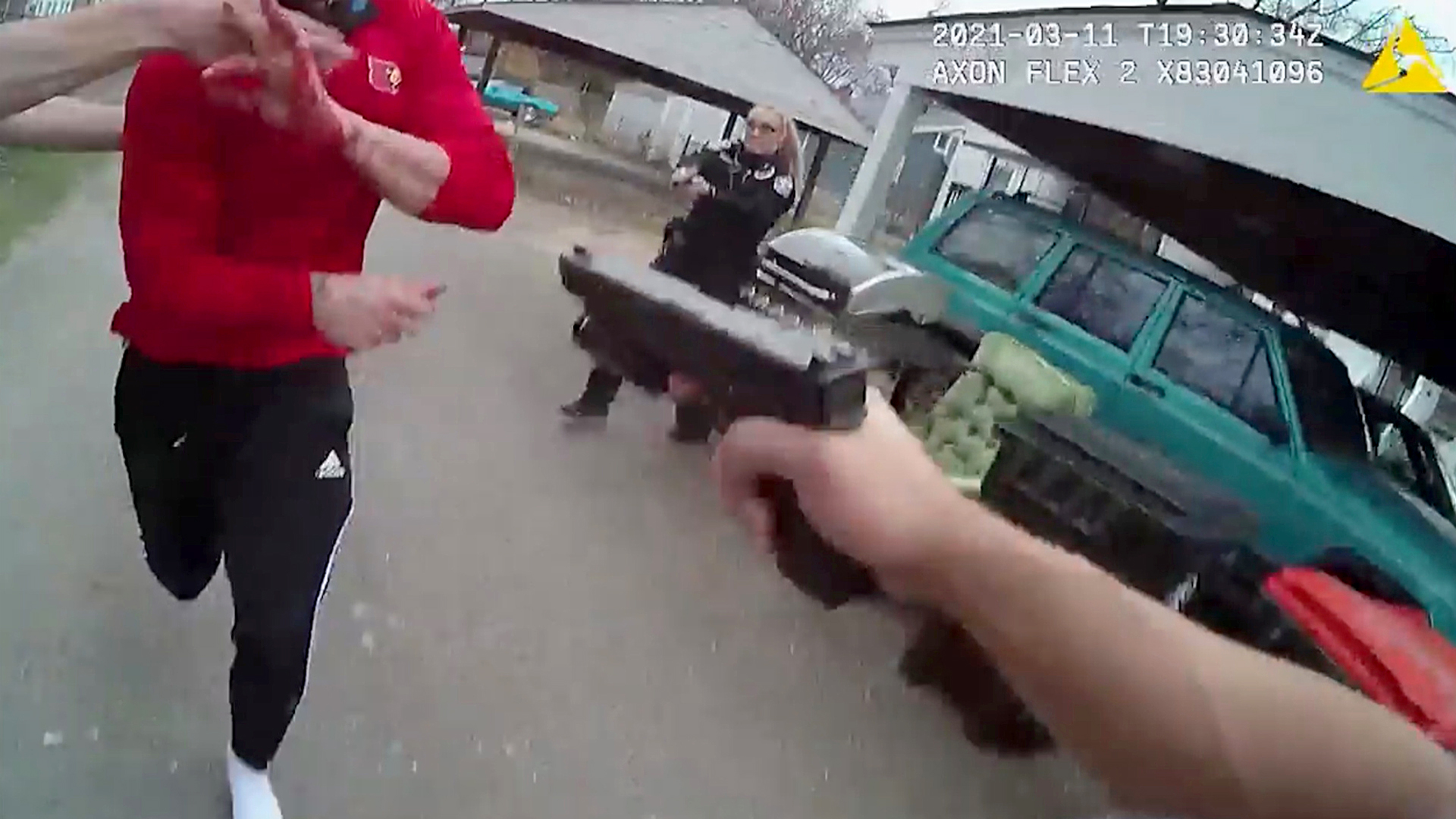 The suspect runs at the officer with a knife in his hand at the Beechmont neighborhood in Louisville in Kentucky. (kentuckystatepolice/Newsflash)

LOUISVILLE, Ky. — The U.S. police officials shot a knifeman who threatened to injure himself before attacking an officer and attempting to stab him.

The video footage shows police officials were constantly asking the man to stop and surrender. However, the man then threw a rubbish bin at one cop before charging at another. He allegedly attempted to stab the officer with a knife.

“We asked him to stop multiple times, but he didn’t. He threw a bin at one of our officials and tried to escape,” said a police official.

The officer-involved shooting took place in Beechmont, Louisville, in the US state of Kentucky on Mar. 11.The Kentucky State Police released the body-cam videos on March 23.

In the footage, Louisville Metro Police Department officers can be seen using tasers and pepper balls to subdue the suspect, who the police said tried cutting himself with a small knife.

Two cops then shot the knifeman on the ground.

As the suspect was told he would be charged with the crime, he reportedly fled the Louisville Metro Arson Headquarters on foot with investigators giving chase.

Arson investigators lost track of Beach, and they called for police backup, with Louisville Metro Police Department cops sent to the area at around 2:30 PM.

“The suspect displayed a knife and began cutting the side of his own neck in front of arresting cops,” said Gregory.

Officer Galen Hinshaw, 32, and an unnamed colleague tried to taser the knifeman. At the same time, Officer Michael Conner, 37, shot pepper balls at him.However, as seen in the footage, Beach continued advancing on Officer Connor until he knocked him to the ground.

As per the suspect’s arrest reports, he “attempted to stab the officer with the intent to cause death”.

Gregory claims that officers Conner and Hinshaw fired their service weapons at the suspect and struck him.

In the video, the bloodied suspect appears to be holding a small blade in his hand.

“Beach was transferred to the University of Louisville Hospital after receiving first aid at the scene. He has since been charged with the attempted murder of a police officer, third-degree assault of a police officer, first-degree fleeing or evading police on foot, and resisting arrest,” said the police officials.

The suspect’s current condition is unclear, and his ‘arraignment hearing’ has been postponed several times while he remains in hospital.

“The investigation remains ongoing and is being handled by KSP’s Critical Incident Response Tea,” said the officials.

As per the report by Louisville Metropolitan Police Department, the dataset explains the officers involved in the shooting (OIS). The highest number of OIS cases were reported in 2019.