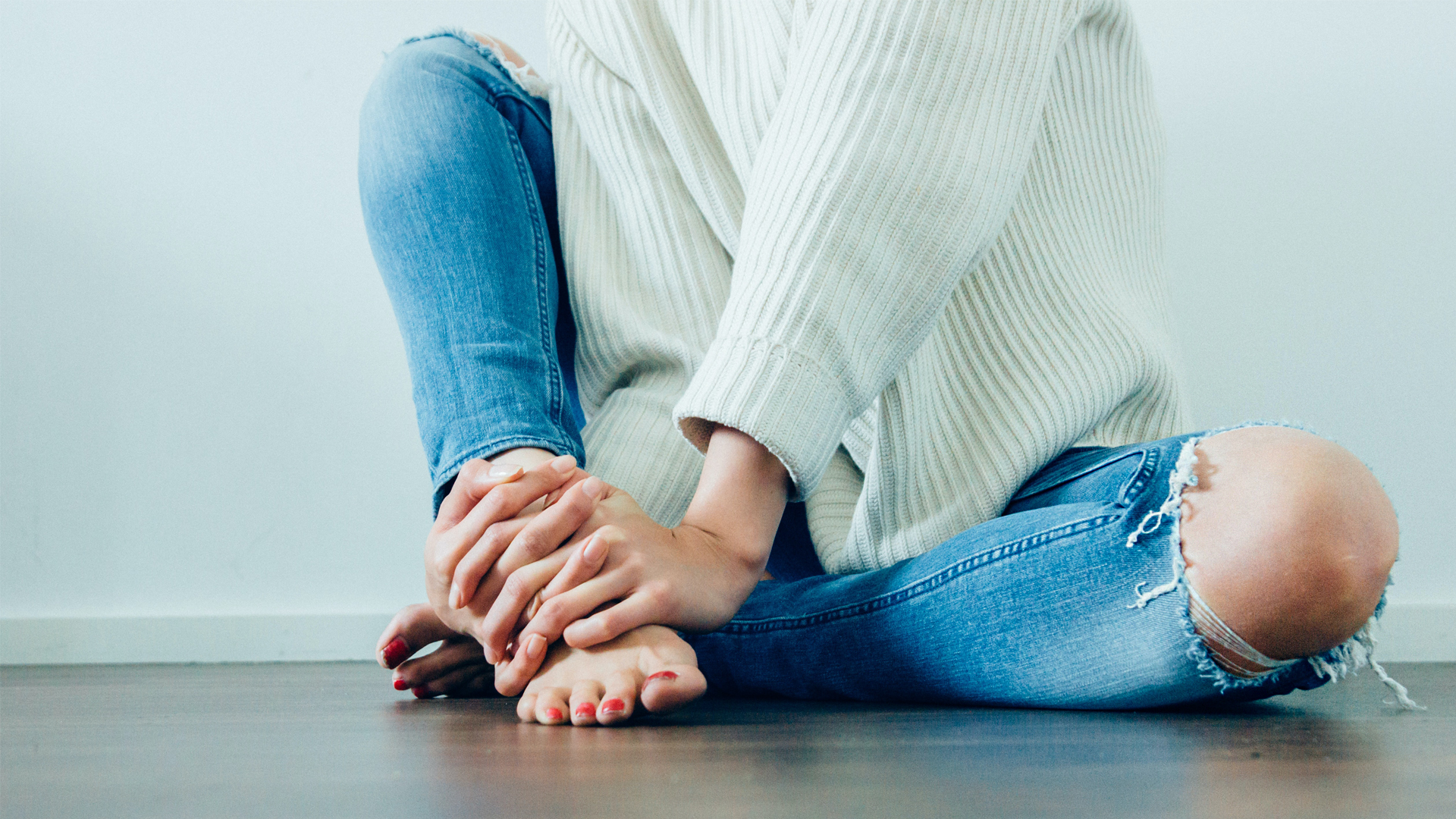 NEW DELHI — Poonam Kumari, 16, a domestic help in India’s national capital New Delhi, wears jeans to work almost every other day even though her brothers frown against it. Teamed with kurtas (tunics), the teenager has made skin-tight jeans a chic Indo-Western fashion statement.

“I love wearing jeans,” said Kumari, who saves up a bit of her salary every month to buy seconds of branded denim from her local market.

“They’re stylish, comfortable, and long-lasting. My brothers don’t like to see me in jeans, but my mother doesn’t have a problem. So, I’ll continue to wear them till I get married.”

Kumari is blissfully unaware of the social media storm raging across India over #rippedjeans and bare knees.

The controversy started when Tirath Singh Rawat, the newly-appointed chief minister of the northern India state Uttarakhand, said women who wear ripped jeans set a bad example for children. He was speaking at a workshop on substance abuse organized by the Uttarakhand State Commission for Protection of Child Rights in the state capital Dehradun.

Rawat illustrated this by talking about a woman he met on a flight. 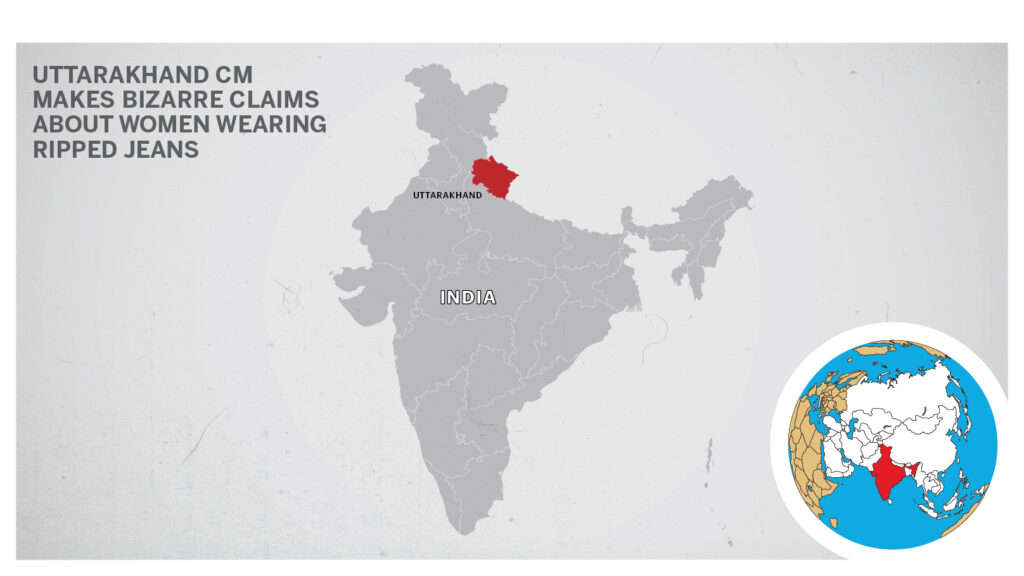 “She told me she was running a non-profit, and here she was, attired in boots, a pair of jeans ripped at the knee and lots of bangles,” said Rawat. “She must be meeting people in society, she has two children; what kind of values would she be imparting to them?”

“This aping of the West and the desire to emulate rich kids is terrible for the moral fabric of our country. While the people in the West are adopting Indian values, we are running towards nudity (translated from Hindi).”

As soon as Rawat’s comments made it to social media, hundreds of Indian women started venting their ire against the minister’s comments. Many posted pictures of themselves in ripped jeans on Twitter and Instagram, leading the hashtags #RippedJeans and #RippedJeansTwitter to trend for hours.

“Rapes happen not because women wear short clothes but because men like Tirath Singh Rawat propagate misogyny and fail to do their duty. Stand in solidarity with the women in #RippedJeansTwitter!” tweeted Swati Maliwal, chairperson of the Delhi Commission for Women.

Architect Seetu Mahajan Kohli tweeted, “Ripped jeans are so cool, they teach us to dress with abandon and not worry about what others think. It’s the narrow-minded brains that need the mending, not the jeans.”

Shazia Ilmi, a spokesperson of the ruling Bharatiya Janata Party to which Rawat belongs, condemned the minister’s statements.

“Women’s clothing should not be commented upon at all,” Ilmi told Zenger News. “Our constitution gives us the right to dress up the way we want to and political leaders must desist from making such comments and making women responsible for all the ills of the society.

“Whether it is coming from a politician or a businessman or a boss, looking at women’s bodies and commenting on their clothes is unacceptable,” she said.

After the backlash, Rawat — who got himself embroiled in another gaffe when he said “America ruled India for 200 years” — did issue an apology, clarifying he did not have an objection against jeans, but only “ripped” jeans.

Jeans have always raised the hackles of the patriarchal society in India. They have been routinely blamed for all “modern” ills from college professors to village councils to politicians. Even 20 percent of the young people surveyed by Statista in 2019 weren’t accepting of women wearing western attires in educational institutions.

In 2018, Rajith Kumar, a professor of botany at Kalady’s Sree Sankara College in the southern state of Kerala, said in a TV show that women who dress like men give birth to transgender children, and women who wear jeans are at risk of having autistic offspring.

In 2016, St. Xavier’s College, one of Mumbai’s best-known Jesuit institutions, banned students from wearing shorts, sleeveless tops, short dresses, and ripped jeans. In 2014, in a diktat affecting 46 villages in north India’s Muzaffarnagar region, a village council decreed that women should not wear jeans as this western import was “destroying society”.

But studies show denim sales in the country are seeing steady growth.

Around 304 million pairs of jeans were bought in India in 2015, according to a Fibre2Fashion report on Statista. By 2020, this number was forecasted to reach around 637 million.

Yasmin Kidwai, an elected municipal councilor from Delhi belonging to the Indian National Congress party, believes that raising a storm about ripped jeans is a tactic to distract from the issues that plague Uttarakhand state.

“This kind of mentality reflects the kind of political leadership we have,” said Kidwai. “I expect the chief minister of a state to focus on his civic and administrative duties instead of checking out a woman on the plane from top to bottom before zeroing in on her knees!”

“A sari, the ideal sanskari (traditional/kosher) garment according to the right-wing, exposes the midriff of a woman. So, who decides whether the knees are more sensual than any other part of a woman’s body?”

As per the Wazir Advisors study, while the men’s segment has a massive 76 percent share of the Indian denim market, the “women’s segment is the fastest-growing at 15 percent compound annual growth rate”.

Designer David Abraham of the Indian brand of handcrafted fashion, Abraham & Thakore, feels jeans are so irksome to the staunchly patriarchal because they represent a move towards modernity by shedding tradition.

“For a young woman to shed her traditional attire and take on the symbols of modernity is very threatening to a patriarchal society,” said Abraham.

“The power of the blue jeans lies in its visual symbolism of independence. It was a powerful symbol of the youth movement in the West in the 60s as well. So, a pair of jeans is more than a pair of jeans.”