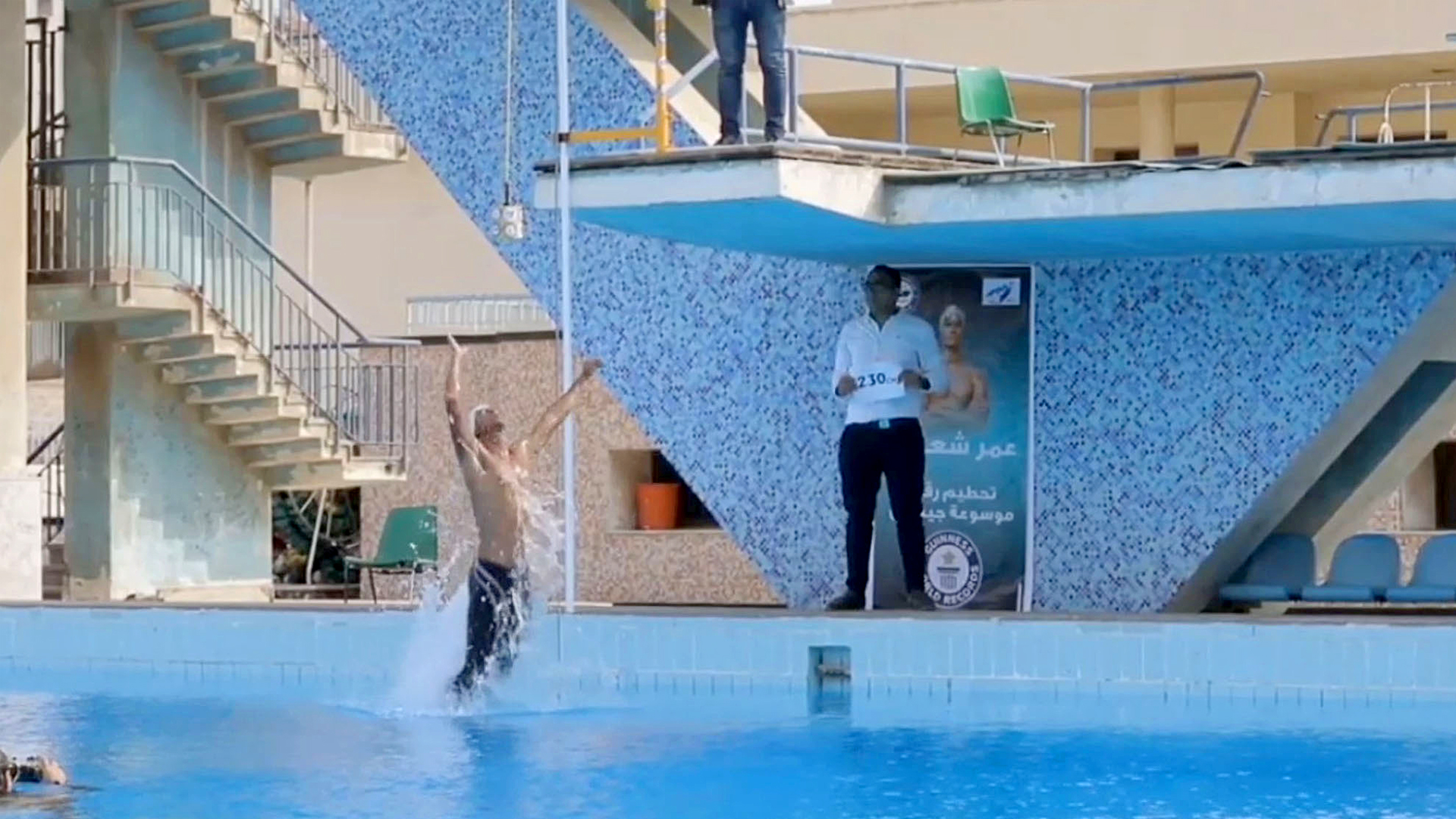 Shaaban, who is considered one of the world's fastest underwater sprinters, broke the world record after nine years. (Newsflash)

CAIRO, Egypt — This video captured the glorious moment when an Egyptian swimmer set a new Guinness world record for the highest jump out of the water with a monofin.

Omar Sayed Shaaban, 21, who trains at Cairo Stadium Swimming Pool in the Egyptian capital, set the Guinness World Record for the highest jump out of the water while wearing a monofin with 2.3 meters (7.54 feet).

Shaaban, who is considered one of the world’s fastest underwater sprinters, broke the world record after nine years.

The record was previously held by fellow Egyptian Soliman Sayed, who comes from the same city as Shaaban, called Ismailia.

Shaaban first caught the attention of his coach Farouk Al Akhras after he entered the local swimming school at the rowing club in Ismailia, aged eight.

A year later, he joined the Suez Canal Club in the same city and spent 12 years there, many of those as a professional sprinter swimmer.

Dolphin-like excellence requires Omar to train three times a day, two of them in water, with a gym session in-between.

“I practice to increase my limb beat frequency and obtain stiffer muscles, but my aim is never to bulk up,” Shaaban said.

“Bigger muscles make it hard to sprint in water, so I work out to maintain the cutting cycle, increase flexibility, enhance muscle reflexes and of course build stronger legs,” he explained.

“The 21-year-old Egyptian national is one of the world’s fastest sprinters underwater and has just set the world record for the highest jump out of the water wearing a monofin, recording an impressive 2.30 m (7 ft 11.8 in) jump,” the records website wrote in a statement.

“This is the first time this record has been broken in nine years. It was held by Cesare Fumarola, Stefano Figini (both Italy), and Soliman Sayed (Egypt), who all achieved a jump height of 2 m (6 ft 6.74 in). Omar studies Civil Engineering, and it first crossed his mind to break a world record in 2015,” the statement states.

In a similar, water sport-related world record, Guinness awarded the ‘oldest person to swim the Ocean Seven’ record to Elizabeth Fry, a US citizen. Fry covered a swim distance of more than 200 km (126 miles) at the age of 60.

“Accomplishing one channel is no easy feat — aside from predators in the open ocean and varying water temperatures, one who tackles all seven channels must be prepared to swim for up to 12 hours or more at a time,” the Guinness website states.