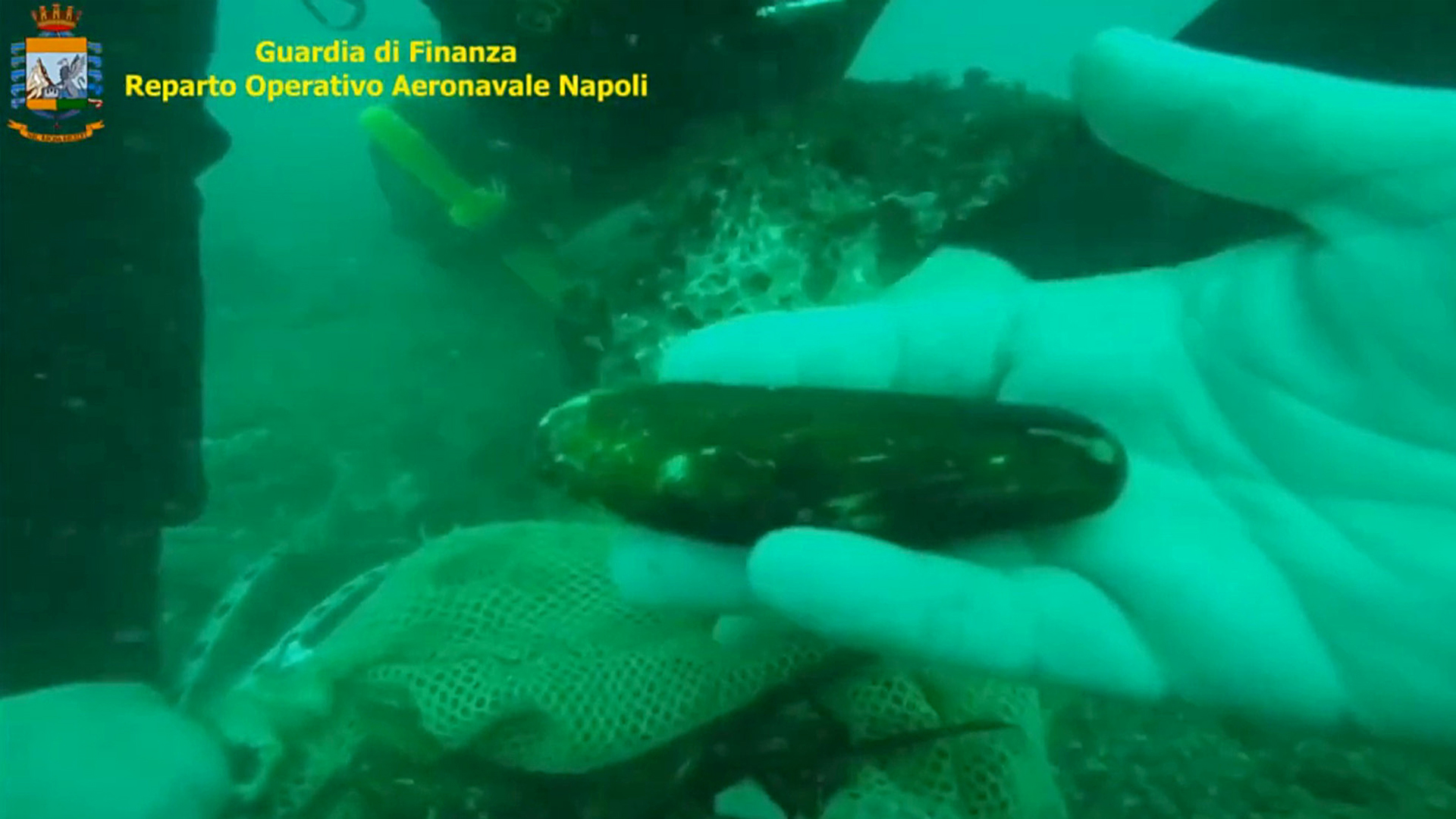 Sea Dates were illegally collected by two criminal organizations in the Gulf of Naples, Italy. (GuardiaDiFinanza/Newsflash)

The recent arrests were carried out three years after the launch of an investigation by the Naples Public Prosecutor’s Office into organized illegal date mussel poaching in the Gulf of Naples.

“The marine species are protected by various international conventions and community directives, and also at the national level the ban on capture, possession, and marketing,” said Guardia di Finanza in a press release.

The capture, possession, and sale of lithophaga, or ‘date mussels,’ from Italian waters has been prohibited under Italian law since 1988. The law was introduced because extracting the mollusks causes significant and irreparable damage to underwater reefs and ecosystems.

Their harvesting has been taking place in the area since Roman times and beyond, where they have been considered a delicacy after being cooked typically in wine, garlic, and parsley.

“In particular, over 100 subjects, identified in the course of the investigations, are operating in various capacities in the ‘black market’ of the date of the sea,” said Guardia di Finanza. “In intercepted conversations, a secret code is often used to avoid explicit reference to the protected species, in full awareness of the illegality of the related trade.”

The investigation found that two criminal organizations mutually controlled the “vast” illegal market. Their most significant periods of activity would coincide with the Christmas and Easter seasons.

The criminal organization involved in the illegal trade would reportedly sell their produce to local restaurants and fishmongers, and members of local crime families. The investigation has so far identified over 100 involved suspects. The latest arrests include the heads of the two organizations, who stand accused of environmental crimes.

Four of the arrested suspects will have to report daily to the police. Three of them will no longer be allowed to live in the Campania region. Naples is the capital, the Italian police claimed.

“The order also provides for the preventive seizure of three commercial premises, located in Naples and in Castellammare di Stabia, where the dates were hidden and then placed on the market,” said Guardia di Finanza.The environmental damage caused by the illegal activity in and around the Gulf of Naples is serious, and large swathes of investigated areas have reportedly been cleared of the species and its associated biodiversity.

Of the 12 suspects, six will be held in preventive detention, and the other six will remain under house arrest.

As per reports by DBpedia, the Gulf of Naples also called the Bay of Naples, is a roughly 15-kilometer-wide (9.3 miles) gulf located along the south-western coast of Italy (province of Naples, Campania region).

“It opens to the west into the Mediterranean Sea. It is bordered on the north by the cities of Naples and Pozzuoli, on the east by Mount Vesuvius, and on the south by the Sorrento Peninsula and the main town of the peninsula, Sorrento,” states a report. ” The Peninsula separates the Gulf of Naples from the Gulf of Salerno, which includes the Amalfi Coast.”

«Previous Post
VIDEO: Is Someone Taking The Piece? Man Does World’s Biggest Jigsaw Only To Find Last Bit Is Missing»Next Post
Pizza-ed Off: Compost Firm Sued For $7.6 Million For Using ‘Toxic’ Fast Food Wrappers In Fertilizer