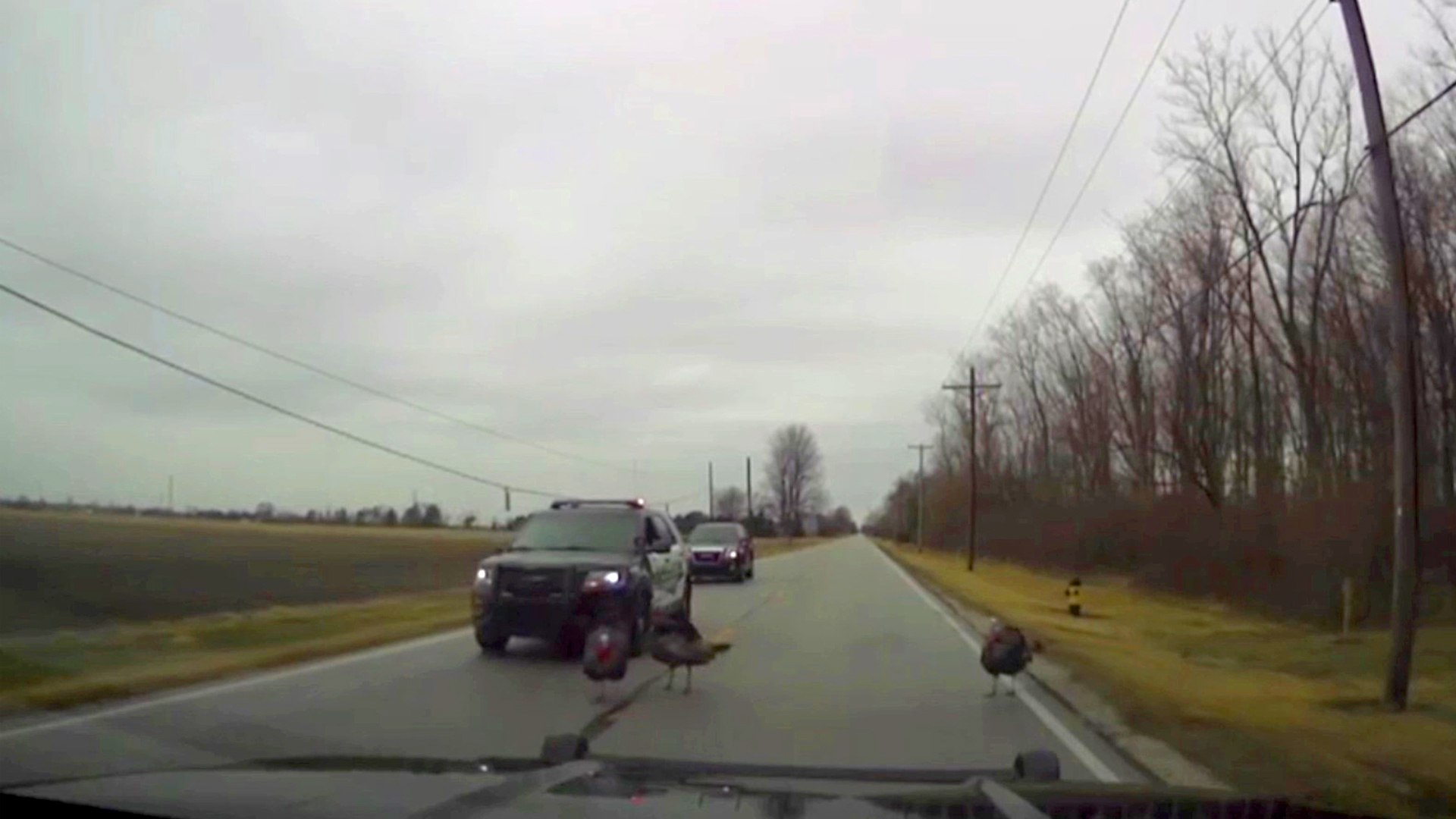 Turkeys blocking the Cedar Point Road and the police in Oregon, Ohio. (OregonOhioPolice/Clipzilla)

OREGON, Ohio — Police officers of the Oregon Ohio Police Division found themselves in reversed roles when they were ‘stopped for a check-up’ by a flock of turkeys who populated the road and would not let them move on.

The encounter took place on Cedar Point Road in Oregon, Ohio, on March 20.

A deputy’s patrol vehicle dash-cam caught the event on video, and the Oregon Ohio Police Division shared the footage on social media the same day. In the video, the flock of turkeys can be seen confidently dominating the road as two patrol vehicles and other passengers remain stuck and unable to pass through.

The police division shared a video of the encounter on their Facebook page, writing, “Why did the turkey cross the road? Well, they didn’t. They are strutting and showing their dominance. In this clip, you don’t see about ten or so hens and smaller toms on the side of the road watching. Courtship and breeding have begun.”

In the video, a seemingly annoyed officer can be heard saying, “Ah come on, dude, just let me go!”, as one of the turkeys walks in front of his car and blocks him just as he was about to pass through slowly.

The video managed to put smiles on many citizens’ faces.

“My son and I were witnesses to this. So funny that they were challenging you guys,” wrote Tammie J. Duncan and thanked the police for posting the video.

“I go almost every day to see them! They know my car now when I pull over. They come running up to me. Yes, we do talk, hehe,” Commented ‘Brenda Schmidt Johlin.

However, like the officers, not every passer-by has had a pleasant experience with these bandits.

“I was also attacked by a raving lunatic wild turkey gang. The sound of a car horn in turkey talk means ‘let’s fight punk’ or ‘attaaaaaack’ because they then attacked my car by beating their wings on my door and pecking my car as I was inside, still being brilliant by yelling Shoo Shoo because that worked so well the first 30 times…” commented Kelly Lentz

“Turkey number one then flies up and hits my window screaming, and turkey number two runs out from under my car as feathers are flying,” she wrote.

Eventually, Lentz managed to find space and escape the “turkey terrorists”, as she jokingly calls them. Luckily, it all ended without injuries on either side.

“The moral of the story, you ask??? Never play chicken with a deranged wild turkey….it doesn’t end well for anyone but the turkey!” she added.

In 1973, there were approximately 1.5 million wild turkeys in North America. After 40 years of effort, that number has reached a historic high of about 6.7 million turkeys. “Today, turkey numbers are down and are estimated at between 6 and 6.2 million birds,” as per National Wild Turkey Federation.