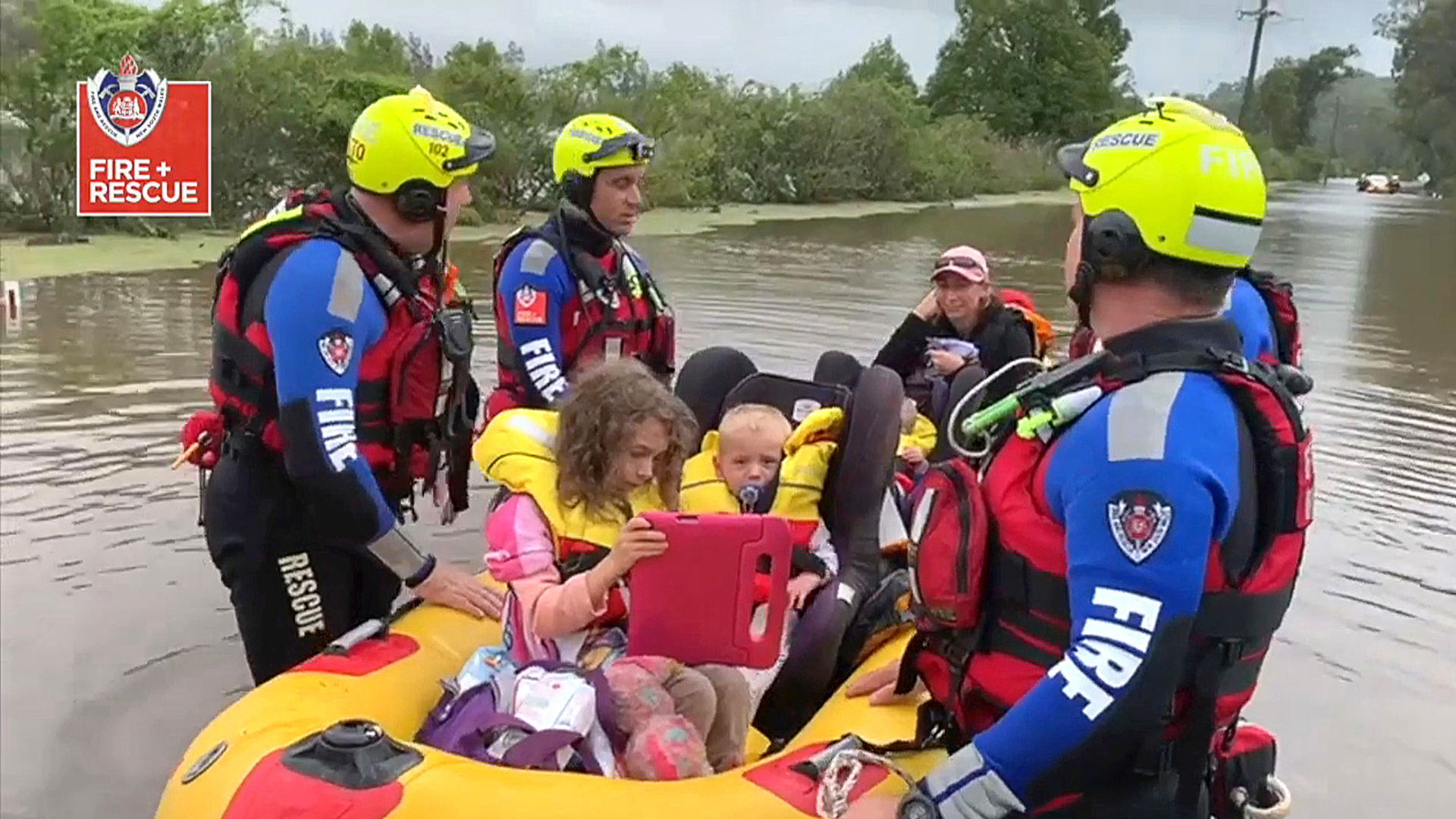 Strike Team Zulu and their two ark angel rafts rescuing Mum and her 4 kids from the flood. (frnsw/Clipzilla)

Heavy rains have been pouring down since March 18, impacting the daily life of citizens. Still, the situation escalated over the weekend when rivers started overflowing and flooding roads and neighborhoods across the state.

“38 different places across the whole state are regarded as areas of natural disaster. Along with that, we have issued 19 evacuation orders by now, but that number might potentially grow,” said Gladys Berejiklian, New South Wales Premier.

Since March 18, a public warning was active, advising residents to be vigilant of the weather conditions and to follow the advice of the local emergency services.

Thousands of emergency workers and volunteers have joined forces to help troubled residents trapped in their flooded homes and get them to evacuation shelters.

Videos published by the State Emergency Service (SES) and Fire and Rescue NSW show emergency workers waddling in waters up to their chests, intently working on getting people out of the affected areas and back to safety.

Many videos showed the crews rescuing families, worried parents with their young children, and even their pets. In one of the clips, Strike Team Zulu can be seen evacuating a mother and her four young children, at least one of whom was an infant, on a rubber dinghy, on March 21.

On the same day, the rescue teams safely evacuated another five adults and four children who had become isolated due to heavy flooding in Tuncurry Caravan Park.

In another clip, officers can be seen on the scene of a flooded road in the Kurwongbah region, assisting two passengers who were stuck in the floodwaters.

Authorities warned that increased rainfall is expected over the next few days, so there is a possibility for even more flooding in many communities that have already been badly impacted.

As per the New South Wales government, many areas across the state “resemble an inland area,” and the moment the rains stop and waters begin to retreat, there will be “massive combined effort to clean up.”

The military is taking involvement, and its crews are being deployed to help with the search and rescue operations.

Since the state is currently in the middle of its Covid-19 vaccination program, the state government encouraged residents to proceed with vaccination despite the floods’ difficulties.

“In Australia, floods are the most expensive type of natural disaster and one of the most manageable. The average annual cost of floods is $377 million ($286 million). The floods that occurred during the summer of 2010-11 cost the Australian economy an estimated AUD 30 billion ($22 billion),” states a study on Australian floods.