The True Origin Of Piñatas

China bequeathed piñatas to Europe, Europe to Mexico, and Mexico to the world. 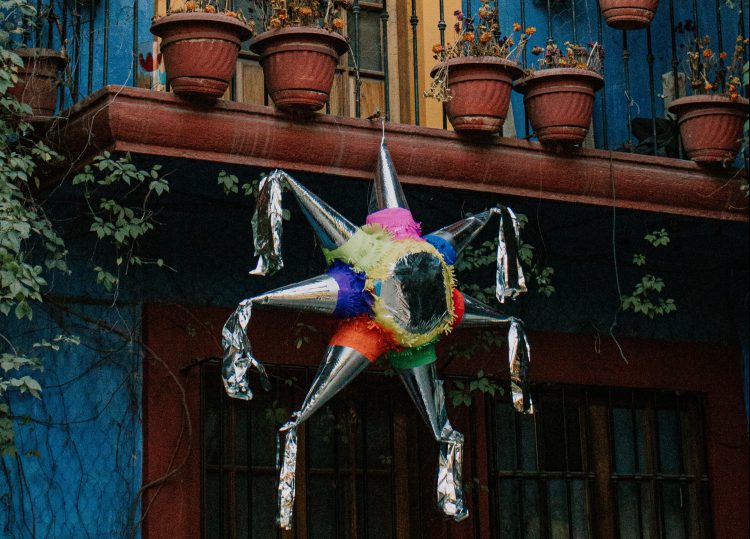 The star-shaped piñata is traditional for Christmas. (Melyna Valle /Unsplash)

When Mexicans break a piñata, they sing a catchy song: “Dale, dale, dale. No pierdas el tino, porque si lo pierdes, pierdes el camino.” The lyrics mean, “Hit it, hit it, hit it! Do not lose focus! If you lose it, you lose your way!”

Piñatas can be made from cardboard, newspaper, or clay pots, adhering colored paper with a paste made from water and flour. They can have a wide variety of shapes and colors, depending on the occasion, and people can fill them with sweets, fruits, or money. The most traditional form is the seven-pointed star, but piñatas can be found in the shape of animals, objects and even famous people.

“Piñatas are essential for children’s parties. It is impossible to think of a birthday party without a piñata. With the pandemic, people seldom make parties. But parents buy piñatas for their children to break at home,” said José García Coello, owner of the candy store Caramelo.

Piñatas’ origin dates back to ancient China and its New Year rituals. They had animal shapes, and people filled them with seeds. Chinese people broke and burned those first piñatas to attract good luck with their ashes.

Marco Polo got acquainted with them during his journey to the Far East. When he went back to Italy, he shared the tradition. Italians adopted it and gifted piñatas during Lent as symbols of abundance. From there, the use of piñatas extended to Spain.

When the Spaniards arrived in Mexican lands in the 16th century, Augustinian friars began holding Christmas masses, followed by celebrations where people broke piñatas. These parties evolved to Mexican posadas, still observed between December 16 and 24.

Piñatas acquired religious symbolism: the seven peaks of the star stand for the capital sins. The stick with which participants break them represents the gospel and divine virtue. Their colors symbolize temptation and pleasure. Finally, breaking the piñata blindfolded means that one can have blind faith that good will win, and there will be a reward, symbolized by the sweets inside.

“As far as I understand, piñatas helped the friars to teach the catechism to the Mexica after the Conquest. From this fact, I consider that the piñata is a Mexican tradition,” said Aurelio Rosa Mellado, owner of the candy store Confeti y Serpentinas. The piñata’s ritual has evolved, but its essence remains.

The municipality of Acolman, in the State of Mexico, is the cradle of piñata making. It holds every December the Piñata Fair that draws thousands of people from Mexico and abroad. The 2019 fair gathered 120 piñata artisans. Exhibitions and competitions are essential components of the fair.

The State of Mexico’s capital, Toluca, broke the Guinness record for the largest hanging piñata in the world in 2015 with 117 artisans from Valle de Chalco making a piñata that was 47 feet tall, 68 feet long, and 37 feet wide.

“Piñatas cannot be missing in any party,” said Rosario Coba, a 54-year-old Mexican, explaining that her two daughters had parties with piñatas during their childhood. They are the oldest members of that generation in her family. All their cousins followed suit.

But piñatas are not just for children.

Breaking a piñata “is a ritual that pleases young and old. There are adults who step in to hit the piñata after all the children had taken their turns,” said Coba. But some children might not be thrilled about it.