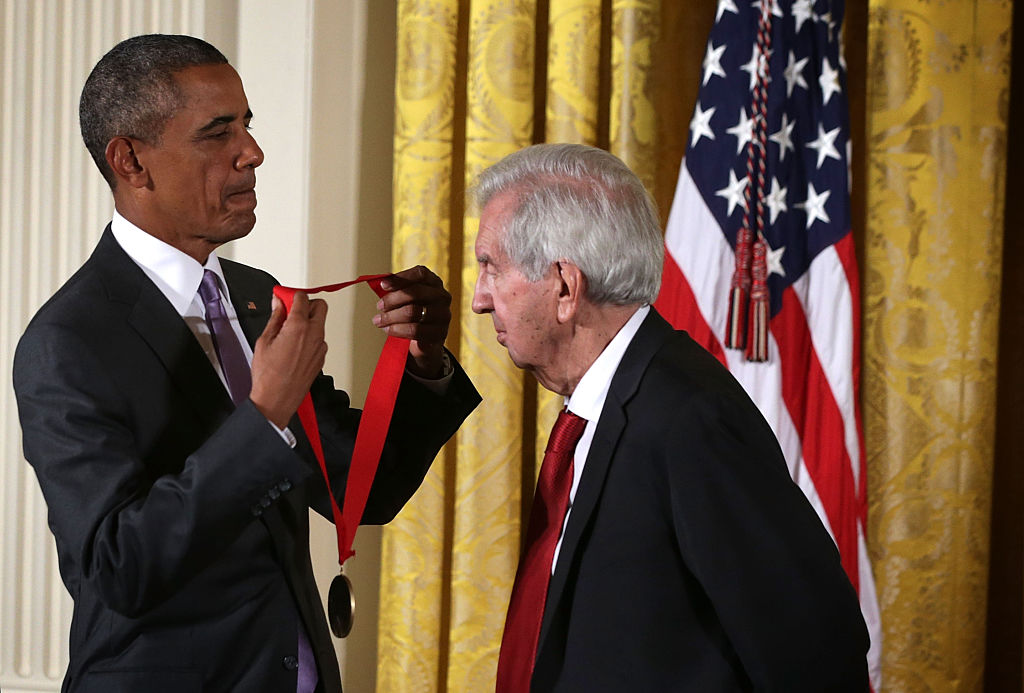 President Barack Obama (L) presents the 2014 National Humanities Medal to Larry McMurtry during an East Room ceremony at the White House September 10, 2015 in Washington, DC. Larry McMurtry was honored for his books, essays, and screenplays. (Photo by Alex Wong/Getty Images)

Larry McMurtry, the American author whose “Lonesome Dove” earned him the Pulitzer Prize in 1985, died of heart failure Thursday at the age of 84 at his home in Archer City, Texas.

“The best thing you can do for death is ride off from it,” the quiet former Texas Ranger Woodrow F. Call says in the novel.

And so they did. McMurtry’s characters drove a herd of stolen cattle from Texas to Montana for one last adventure, riding north through the American landscape of Western myths.

Robert Duvall, who played Gus McRae in the “Lonesome Dove” television miniseries in 1989, once teared up as he called Gus his Hamlet.

Gus is an Old West archetype who takes our human faults in stride as he follows a code so resolute he hangs a friend for falling in with a gang of horse thieves and murderers. “You ride with an outlaw, die with him. I admit it’s a harsh code. But you rode on the other side long enough to know how it works,” Gus says before he hangs his friend and former Texas Ranger.

In today’s age of political expediency, it is hard to imagine a man taking that stand. It is harder still to imagine people nodding along with Gus as he deals harsh justice in a place with little law.

McMurtry also wrote 29 other novels, numerous screenplays and over a dozen works of non-fiction over the course of more than 50 years.

And he wasn’t just a hard-edged Western novelist giving us manly characters trying to get along as best they can within big, harsh, dry landscapes. McMurtry also won an Oscar in 2006 for the screenplay adaption of E. Annie Proulx’s short story “Brokeback Mountain,” a screenplay he co-wrote with Diana Ossana.

If someone thinks it was out of character for McMurtry to write sympathetically about two cowboys who are in love with each other, they didn’t know McMurtry. And they couldn’t recognize the real American ideal of the open-minded man on the frontier looking pragmatically into sunsets as he brings the human spirit, boundless imagination and the law to new lands.

RIP Larry McMurtry, whose Oscar speech (delivered in jeans and cowboy boots) after he and Diana Ossana won for the Brokeback Mountain script had this wonderful tribute to books pic.twitter.com/wZ3yNYvNlc

McMurtry knew this archetype. And he knew the character wasn’t really so simple as it is often portrayed today. He grew up with its rules and myths. He was born in 1936 on a Texas ranch. His grandfather broke horses and his father raised cattle. He knew these men and women and he lived among them even after he became a literary success.

Thanks to a mutual acquaintance I met him briefly in 1999 while on an unrelated article assignment. I was a young editor working for Outdoor Life magazine. To size me up, he asked me a few questions, nodded, and offered this advice: “Read young man. Read everything and see it too, and hear it, and smell it, and know it until you feel it. Then see if you can bring it to life on the page.”

Larry speaks on the future of reading on C-Span.

Later on that same trip, I was on a horse in New Mexico. The horse was having trouble pushing through snowdrifts in the early spring, but she kept her composure and somehow I stayed in the saddle. When we were through the worst of the drifts, a cowboy in front of me turned and said, “That horse has a great disposition. It’s why I put a New Yorker like you on her. And she is a movie star, you know. Robert Duvall rode her in part of Lonesome Dove.”

That brought it full circle for me. Though I briefly met the man, and rode the same horse he did, like millions of fans I knew McMurtry through his books and characters. Especially Gus — the man that every man, at least somewhere deep down, wants to be.

So McMurtry gave us Gus, and all he embodied, and now I wonder if we can still, today or in the next generation, understand that type of generous, fun-loving, accepting but hard-as-nails kind of man.

If we lose sight of such a character — if we let political correctness parody him and belittle him — we’ll have lost a fundamental part of the American spirit, the part that truly believes in just action in the face of uncertainty and evil, an open-mindedness that doesn’t try to sum up a person with a quick glance at a person’s looks, gender or political affiliation. Now that would be a tragedy for our culture.

McMurtry is survived by his wife Norma Faye Kesey; his son from a previous marriage, James McMurtry; and his grandson, Curtis McMurtry.

Frank Miniter is the author of Kill Big Brother and The Ultimate Man’s Survival Guide.