The Refined Aesthetics Of Black Clay 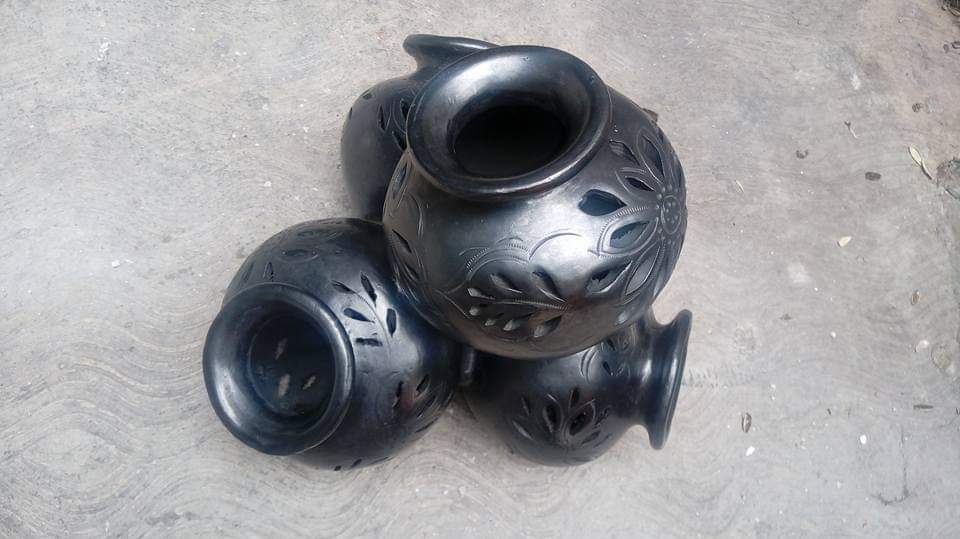 The barro negro tradition dates back to pre-Hispanic times. Artisans have inherited the secrets of their technique in family workshops. (Christian Valera Rebolledo/Café Words)

Hundreds of artisans work daily on this craft. More than half the population of San Bartolo Coyotepec, a town in Oaxaca’s Central Valleys, makes a living from barro negro.

The barro negro tradition is passed down from generation to generation in workshops, usually family-run. The great masters of barro negro have emerged from these workshops.

Barro negro artisans can sculpt any object or animal with this material. They make jars, vases, plates, crosses and even replicas of human skulls. Their aesthetic marks are the patterns of circles, stripes, and flowers engraved on the pieces’ surfaces.

An artisan may work on a piece for days, especially on those that are highly engraved. Money usually does not come until the piece is finished. But they love their work.

Authentic barro negro is not painted. The artisans receive the clay in stones, which they must moisten to form a rectangular block. They achieve this by kneading the clay with their feet on a basketwork mat.

Then they model the clay. They perfect the shape using a small knife to cut out sections of the piece and then flatten the clay with a sponge. Next, they engrave the surface using different tools, from a plastic spoon to a pen. The motifs will depend on the imagination of each artisan.

“The work is hard. However, I rather do this than work in the fields under the sun. Here we are in the shade. And one can work little by little, in stages. Today I shape it, tomorrow I mold it, [and so on],” said Ramón Juárez, a 41-year-old craftsman from Oaxaca, who makes barro negro.

The last step is firing the clay in an excavated oven. Juárez said that this process is similar “to cooking barbacoa,” a lamb dish that Mexicans bake underground. Artisans fire the pieces at very high temperatures, which hardens them.

Craftspeople usually travel to the state capital, Oaxaca, to sell their pieces. Oaxaca is a tourist destination, where shoppers from all over the world buy barro negro.

He enjoys the compliments of his clients. But some of them have strange remarks. “Once, an oncologist bought a skull and said, ‘Hey, you made way too many teeth.’ I said in response, ‘Well, I haven’t counted my own,’” Juárez said.

But as much as he enjoys his clients’ compliments, he cares more for a particular opinion: “I feel very good when my son praises my work,” said Juárez, who learned the trade from his father.

Barro negro “is a form of traditional art,” said Rosario Oropeza, 85, a retiree. “It gives a very different style to the house [decoration]. … I still keep some pieces that someone gave me a few years ago. My husband, may he rest in peace, used to bring small pieces from Oaxaca every time he traveled there. They were lovely.”