Many from the tinsel town have successfully switched over to the corridors of power. 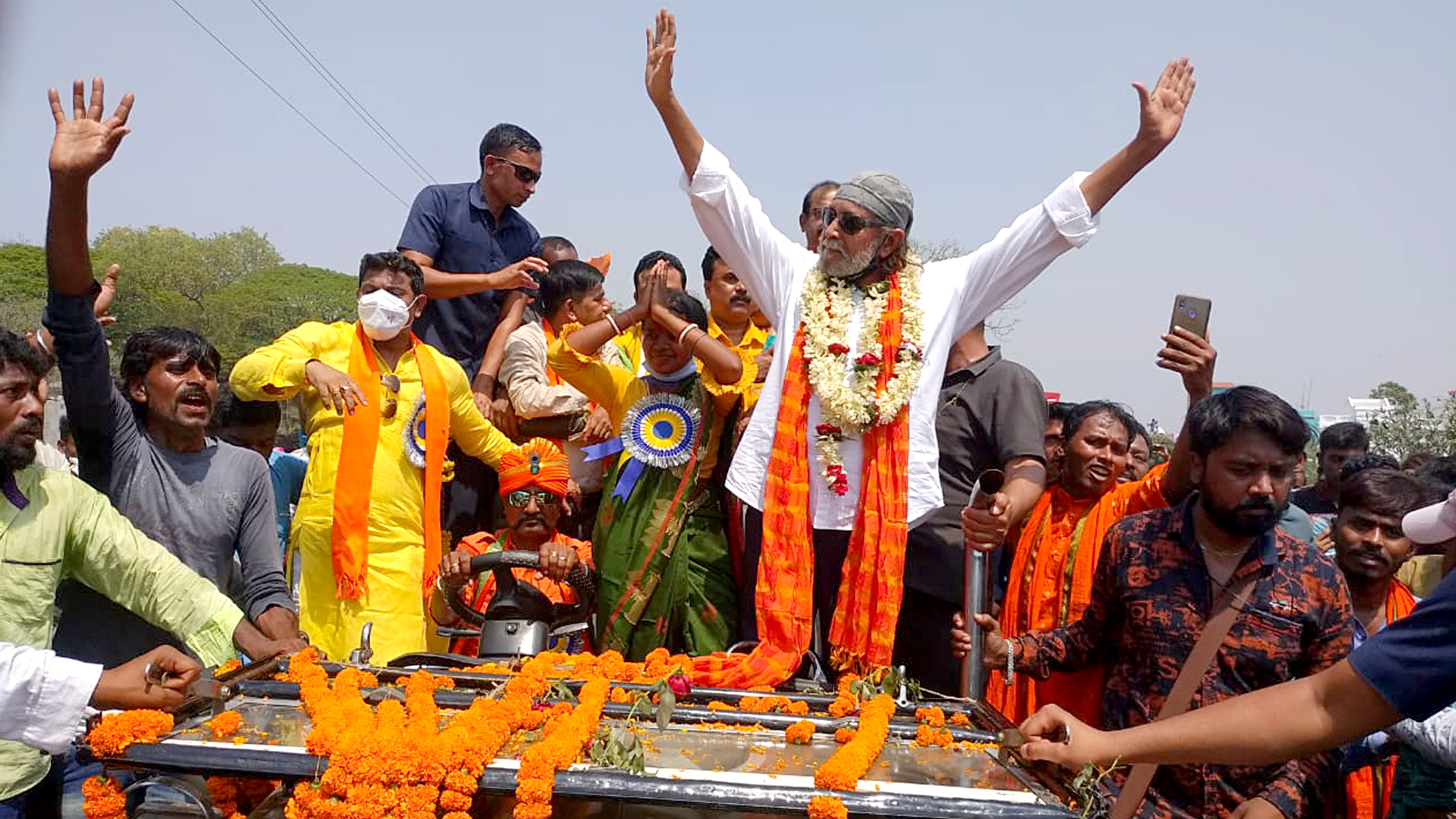 MUMBAI, India — Indian Prime Minister Narendra Modi shared the stage earlier this month at an election rally in the eastern metropolis of Kolkata with Mithun Chakraborty, a former leading man in Hindi and Bengali films and winner of several awards.

In his typical style that is popular with fans, Chakraborty told the thousands of people who had come to rally: “I am not just any snake, I am a cobra. One bite and you will be finished.”

This was supposed to a challenge to the incumbent government in the state of West Bengal, of which Kolkata is the capital.

West Bengal Chief Minister Mamata Banerjee’s Trinamool Congress (TMC) dislodged a 34-year-old communist government in 2011 and got re-elected in 2016 to the state legislature. The state will start voting over eight phases again on March 27. Modi’s Bharatiya Janata Party (BJP) has emerged as the primary challenger to TMC in this election.

He also won several National Awards for his acting and was nominated to the Rajya Sabha, the upper House of India’s bicameral parliament, from the TMC from 2014 to 2016. Before the TMC, he was also affiliated with the Communist Party of India (Marxist).

Actors and entertainers joining politics are not uncommon around the world.

In America, Ronald Reagan was a matinée idol before becoming president, and Arnold Schwarzenegger served as the governor of California from 2003 and 2011. Eva Peron — who was played by Madonna in the 1996 biopic “Evita” — was a leading politician and first lady of Argentina as the wife of former president Juan Peron from 1946 to 1952.

In India, too, actors have switched careers from the tinsel town to legislatures with great success. Some of the most obvious examples are N. T. Rama Rao, who served as the chief minister of the southern state of Andhra Pradesh in the 1980s and 1990s, as well as M. G. Ramachandran and his protégé J. Jayalalithaa, both of whom dominated the politics of the southern state of Tamil Nadu for decades.

In a strange reversal, both Rao, popularly known as NTR, and Jayalalithaa now have biopics on them — “N.T.R. Kathanayakudu” (2019) and “Thalaivi” (2021), respectively.

“Politics is a passport for getting a lot of things done,” political analyst Rasheed Kidwai told Zenger News.

“Actors who have black money can make use of political connections to convert it into white money,” said Kidwai, who has also written the book “Neta Abhineta: Bollywood Star Power in Indian Politics” on forays by Bollywood actors into politics. “If you are close to the establishment, it is easy to get financing for any work that you need to do.”

The current elections in West Bengal have demonstrated how attractive a political career is for actors and entertainers.

While the BJP is fielding stars of the Bengali film industry such as Papiya Adhikari, Srabanti Chaterjee, Soumili Ghosh Biswas, and Yash Dasgupta, the TMC has singer Aditi Munshi, actor Subhadra Mukherjee, and actor-director Dheeraj Pandit in its stables.

“The BJP has always given the youth a chance,” Dasgupta told Zenger News. “It is the youth that can bring about a change. Politics is about change, and if you want to change the system, you need to be a part of the system.”

But there is still some skepticism about actors being serious about their political careers.

“We cannot deny the fact that actors are popular faces and add star value,” Rakesh Sinha, a Rajya Sabha member from the BJP, told Zenger News. “But over the years, we have seen many actors making an impact on the people. For many, it is a natural route.”

Kidwai said voters often accepted superstars as they seemed to carry over their hopes and aspirations from reel life to real life.

“We cannot make a sweeping generalized statement but according to my observations and what I have documented, I feel actors from south Indian film industries are serious about their political career,” said Kidwai. “It is because they have deep roots in society, understand socio-economic cultural dynamics and have a greater commitment.”

For instance, Ramachandran — popularly known as MGR — was deeply involved with anti-caste politics along with his friend and later bête noire M. Karunanidhi, also a former chief minister of Tamil Nadu. Their friendship and rivalry were the subject of the 1997 Tamil film “Iruvar”.

In the Hindi film industry, too, actors have stepped into politics. One of the earliest to do so was Prithviraj Kapoor — a pioneer of Indian cinema and theater — who was nominated to the Rajya Sabha. Nargis, who played the titular role in Oscar-nominated “Mother India” (1957), also served in the Rajya Sabha in 1980.

Other actors from the Hindi film industry have plunged into the electoral fray for the Lok Sabha, the lower House.

Amitabh Bachchan, whom Americans will remember from the 2013 “The Great Gatsby”, was a close friend of former prime minister Rajiv Gandhi and was elected to the Lok Sabha in 1984.

However, he dropped out when he was involved in a corruption scandal over defense supplies.

His contemporaries such as Rajesh Khanna, Shatrughan Sinha, Vinod Khanna, and Raj Babbar have successfully transitioned to politics.

Others have not been so successful.

Dharmendra, a leading actor of the 1960s and 1970s was a member of the parliament for the BJP, representing the Bikaner constituency in the western state of Rajasthan from 2004 to 2009. But he didn’t enjoy his political stint.

“I don’t have anything against actors getting into politics but being an actor, I believe you should continue to be in films,” Dharmendra told Zenger News.

“I have received a lot of love from my fans and entering politics divides the audience and acceptance,” he said. “I didn’t want to influence anyone on their ideologies and that was one of the reasons I decided not to continue with politics.”

His son Sunny Deol, who had a successful Bollywood career as a leading man in the 1980s and 1990s, contested the 2019 general elections in the country as a BJP member and is currently a member of the parliament from the Gurdaspur constituency in the northern state of Punjab.

“It is the quest for longevity in public life,” said Kidwai. “When the reel life tenure starts declining, many actors decide to enter politics. Most actors want to take advantage of people’s adulation.”