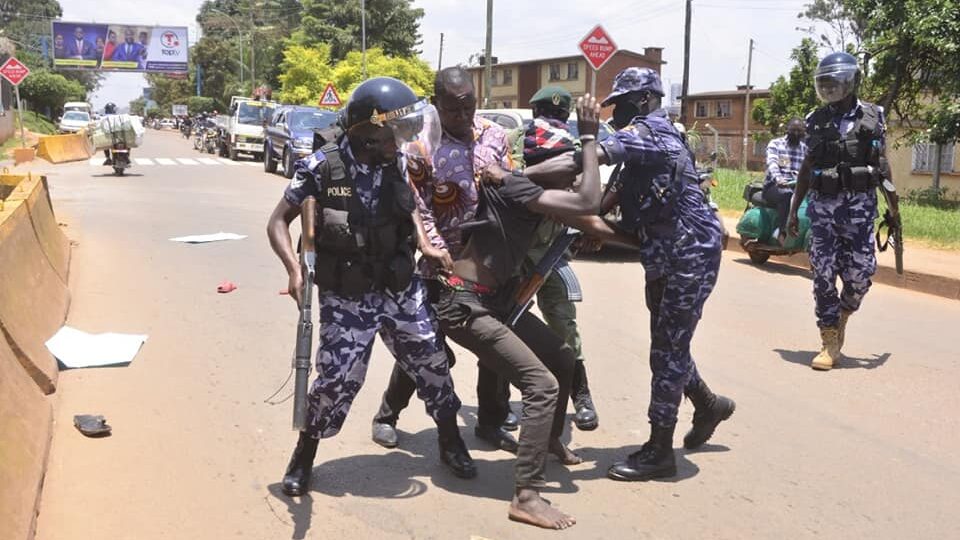 Uganda riot police drag away one of the protesters at the entrance to the U.S. Embassy in Kampala, Uganada, on March 15. (Guyson Nangayi)

KAMPALA, Uganda — Amid post-election tensions in Uganda and reports of the abduction and detention of hundreds of members of the opposition, several youths were arrested last week while demonstrating at the U.S. Embassy in Kampala against the disputed victory of President Yoweri Museveni.

Holding signs that read: “Our lives are in danger,” “Bobi Wine is our president-elect,” and “Museveni, we are not your slaves,” the demonstrators sat on the ground at the embassy’s entrance in an attempt to get U.S. help in removing Museveni.

The demonstration was in response to a call for peaceful protests against the election results by musician-turned-politician Robert Kyagulanyi, better known by his stage name, Bobi Wine, on March 9. Wine is the leader of the opposition National Unity Platform.

“The public has witnessed arrests and detention of National Unity Platform members, torture and brutality used against arrested Ugandans. I therefore call upon you to get up peacefully, unarmed and demonstrate against a regime that has oppressed us,” Wine said at a press conference.

“They’ve oppressed us, exploited and turned us into slaves in our own country. The women, whose sons are missing, the Ugandans who voted, and your results were short-changed. Initiate and peacefully demonstrate against that impunity,” he said.

On March 15 Wine was arrested while peacefully protesting.

“He led MPs and other leaders in a peaceful protest against the abduction, torture and murder of his supporters. The protest was taking place at City Square, Kampala,” Wine’s office said.

A month after the election, which was widely reported to have been marred by violence and irregularities, Wine released a list of hundreds of people alleged to have been abducted by security forces.

The United States and other foreign governments strongly criticized the Ugandan government for shutting down the internet during the election and banning observers from the U.S. and the European Union.

U.S. Ambassador to Uganda Natalie E. Brown, who met with Wine on Jan. 30, issued a statement at that time noting “the United States’ deep and continuing concern about the extrajudicial detention of opposition political party members, the reported disappearance of several opposition supporters, and continued restrictions on the National Unity Platform’s operations.”

In the wake of the disappearances linked to the election, relatives and friends of the hundreds — some say thousands — of people have been desperately searching for their missing loved ones.

“The pain of parents whose children have been abducted by the Museveni dictatorship in the thousands. For simply supporting me and the National Unity Platform, these young people are tortured and some murdered!” Wine tweeted on Feb. 5. “We call on the world to stand with Uganda in these very dark days.”

Wine said countless Ugandans have been abducted and brought to unknown places, and about 423 are currently listed as missing, though the government acknowledges only 177 in its custody.

Prime Minister Ruhakana Rugunda told Zenger News that “The government has taken keen interest in looking into the matter, and we are acting accordingly. A number of those arrested have already returned to their families.” He did not mention any names.

Museveni said this month that he would only consider releasing 50 of the 177 people in detention.

Museveni, who has ruled the country for 35 years, was declared the winner of the Jan. 14 presidential election with 59 percent of the vote to Wine’s 35 percent, despite allegations of human rights violations and election irregularities ahead of the poll.

In the run-up to the election, Wine was arrested, and Museveni publicly stated that 54 people were killed in protests on Nov. 18-19, 2020, following that arrest.

Tibor B. Nagy Jr., assistant secretary in the U.S. State Department’s Bureau of African Affairs, tweeted a day after the election, “We are deeply troubled by persistent reports of fraud in Uganda’s January 14 elections.”

He cited reports of denial of accreditation to observers, violence, the harassment of opposition members and the arrests of civil society activists.

Wine said that according to the declaration forms in his party’s custody, he actually won the election with 54 percent of the vote.

Africa Elections Watch, which deployed more than 3,000 observers across the country, said they had observed irregularities, including the late opening of most polling stations, missing ballots and illegally opened ballot boxes.

A Human Rights Watch report on events in Uganda in 2020 stated that “Authorities … stepped up restrictions on freedoms of expression and assembly ahead of general elections … . Authorities broke up opposition rallies, arrested government critics and opposition members and placed restrictions on media.

Wine told Zenger News that the protests will continue until Museveni is gone.

“We are basing our demonstration on three key demands: immediate end to the kidnapping of our folks that are removed on a daily basis; release of all political prisoners with immediate effect; and an end to trying civilians in military courts,” Wine said.

In response to Wine’s call for protests, police have put all officers on standby, telling them to reinforce their visibility, enforce an ongoing curfew and set up checkpoints to watch people’s movements, especially youths.

Lucas Owoyesigire, the Kampala Metropolitan police spokesperson, said any such protests would be illegal, and participants would be treated appropriately.

“The organizers of those illegal demonstrations are mobilizing the public using social media and leaflets with wordings that read, ‘Time is now, join the nationwide protests,’” Owoyesigire said. “We’ll not at any time hesitate to arrest and charge in courts of law anyone who is going to be found participating in these illegal activities.”

Meanwhile, abductions are still occurring as plainclothes security forces use what are described as “drone vans” to locate and detain people.

Prominent Museveni critic, political activist and former university lecturer Stella Nyanzi, has fled Uganda with her children and is seeking asylum in Kenya.

Nyanzi, who ran for a parliamentary seat on the ticket of the opposition Forum for Democratic Change, was abducted before the January election. She said she was tortured by security operatives.

Nyanzi spent nearly 16 months in detention after being found guilty of insulting the president with a graphic poem describing the birth of Museveni, criticizing his “oppression, suppression and repression” of Uganda. She was released in February 2020 and fled to Kenya on Jan. 30 of this year.

The executive director of the Uganda-based Foundation for Human Rights Initiative, Livingstone Sewanyana, has called for Museveni’s government to swiftly bring those arrested before the courts, in accordance with the country’s constitution, citing a troubling resurgence of violent intimidation in the country.

“The act of abductions, kidnappings and enforced disappearance may be a relic of dictatorship,” Sewanyana told Zenger News. “It speaks of our past history and also developments and trends [seen] during the 1970s” under the brutal rule of former President Idi Amin.

“This must be rooted out. Those held responsible must be punished,” he said.