The Ahmadis, a persecuted community of 4 million in Pakistan, are banned from posing as Muslims.
By Kunwar Khuldune Shahid March 25, 2021
Facebook
Twitter
Linkedin
Email 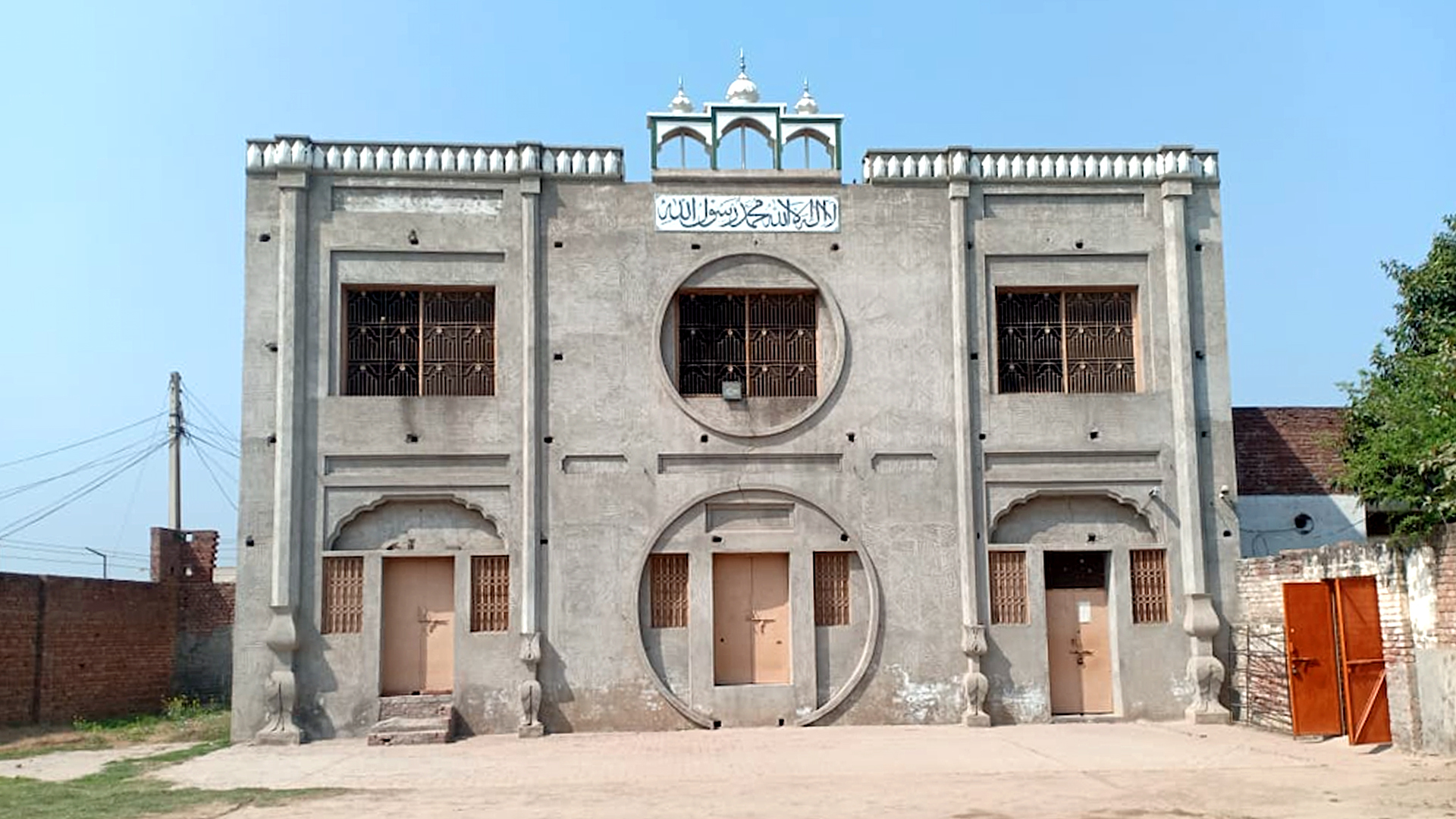 The Ahmadi place of worship before the attack. (Aamir Mahmood)

LAHORE, Pakistan — After months of social media hate speech targeting, the Ahmadis or Ahmadiyyas — a minority community in Pakistan — continue to live in fear.

In Garmola Virkan, a village located in Gujranwala in Pakistan’s Punjab province, the situation was on the edge after a few locals raised complaints against an Ahmadi mosque.

But nothing could’ve prepared the community for what ensued on March 17.

A mob assembled near the mosque in board daylight. Soon, the local municipal authority members — armed with axes, hammers, and rods — came and climbed atop the building. They began tearing the minarets and desecrating the kalma (Islamic phrase) inscribed on the mosque’s facade.

The locals said eight police officers, including the local station house officer, were complicit in this act.

“We won’t let anyone from the outside touch the minarets or the kalma,” Aamir Mahmood, a spokesperson for the Ahmadi community and head of their media cell, told Zenger News. “Police, however, is a representative of the state, so we can’t stop them.” 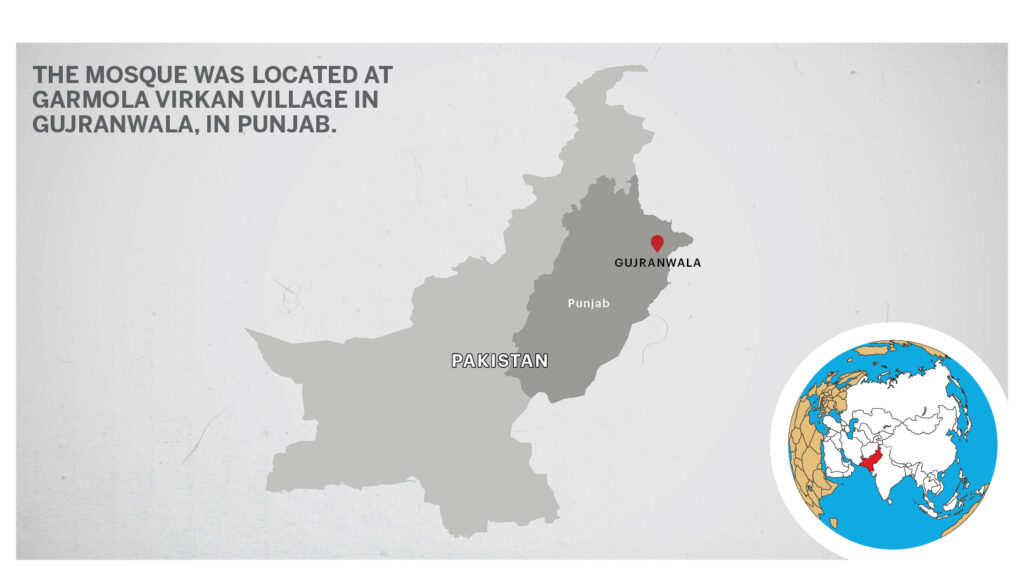 “But we told the police that their acts were unlawful, unethical, and in violation of human rights and the Constitution of Pakistan,” he said.

Article 20 of the Constitution of Pakistan grants all citizens the right to profess their religion. In 1974, through the Second Amendment to the Constitution, Ahmadis were declared non-Muslims in the country.

In 1984, under the military dictatorship of Zia-ul-Haq, Ordinance XX was passed, which introduced two sections in the Pakistan Penal Code, further limiting the Ahmadis’ religious freedom.

The two sections (298B and 298C) state that any person of the “Quadiani group or the Lahori group (colloquially known as the Ahmadis or Ahmadiyyas), who refers to his place of worship as a ‘Masjid’ (mosque)” or “directly or indirectly poses himself as a Muslim or refers to his faith as Islam” shall be punished with imprisonment for up to three years with a fine.

When contacted for comments, the office of Gujranwala’s Sub-Divisional Police Officers and the Counter-Terrorism Department of Pakistan’s Punjab Police declined to speak.

Following the destruction of the Ahmadi place of worship, the locals and the mob chanted “Tajdar-e-Khatm-e-Nabuwwat zindabad,” meaning “long live the crown bearer of the finality of the prophethood.”

Members of other Islamic sects deem the belief of the Ahmadis in their community’s founder Mirza Ghulam Ahmad as heresy and denial of Prophet Muhammad being the final prophet of Islam.

Groups such as Majlis-e-Tahaffuz-e-Khatme Nabuwwat were established across Pakistan for decades to stifle Ahmadis from preaching and protecting the belief in the finality of the prophethood.

“The police had no legal right [to demolish the worship place]. They had no court order. The police can’t decide which places of worship can, and cannot, have a minaret or the kalma,” said Mahmood.

The attack on the community’s place of worship is the latest in a continuum of gory incidents targeting the Ahmadis in Pakistan. The surge in violence came after the murder of Ahmadi-born Tahir Naseem, an American citizen from Illinois, on blasphemy charges inside the Peshawar Judicial Complex in July 2020 ahead of a hearing.

“Though Naseem had left the Ahmadi community, his killing gave momentum to violence against the Ahmadis in the city. Many local members of the community have since left Peshawar and moved elsewhere,” said Mahmood.

According to a report by the Religious Prosecution of Ahmadiyya Muslim Community, Naseem was the 77th person killed for blasphemy in the country. Since Ordinance XX, more than 270 Ahmadis were murdered and 395 assaulted for their faith. At least 54 Ahmadi places of worship were demolished and 43 sealed and thousands of Ahmadis booked for “posing as Muslims”.

Many from the community find refuge in Rabwah, a small town around 200 kilometers south-west of Gujranwala. Rabwah, or Chenab Nagar (official name following the removal of its Islamic name), is the only Ahmadi-majority city in Pakistan. Of the 4 million Ahmadis living in Pakistan, Rabwah is home to around 65,000 members.

At least a million Ahmadis live in Pakistan’s neighbor India. The community has established its international headquarters in the United Kingdom.

Law enforcement agencies often raid the town to clamp down on Ahmadi preaching. The Counter-Terrorism Department has conducted multiple raids to seal printing presses and seize literature propagating the faith.

“We feel threatened and insecure when the state supports the elements that target us,” Mehmood Iftikhar, an Ahmadi resident from Rabwah, told Zenger News. “In the past two to three years, fear has significantly increased after law enforcement agencies started arresting Ahmadis from Rabwah.”

Iftikhar said there is anger among the community since they are patriotic and law-abiding Pakistanis.

“Also, because of social media, we are issued threats online even in Rabwah,” he said.

Scores of Twitter trends aimed at Qadianis like #QadianiAqalliyatNahiGhaddar (Qadianis aren’t a minority, but traitors) and #QadiyaniatSePakPakistan (A Pakistan free of Qadianis) have made matters worse for the community.

“Qadianis aren’t just non-Muslims; they are blasphemers as well,” Ijaz Ashrafi, co-founder of TLP and former information secretary, told Zenger News. “They openly violate the Constitution, and the state isn’t taking any action.”

Sections 298B and 298C of the Pakistan Penal Code mandate prison sentence and fine, but Section 295C states that whoever “defiles the sacred name of the Holy Prophet Muhammad” shall be punished with death.

Ashrafi’s party uses these clauses to issue open calls to persecute religious minorities and citing the blasphemy law to influence their diplomatic relations.

The TLP also demanded the expulsion of the French ambassador over the publication of Prophet Muhammad’s caricatures in the satirical French magazine Charlie Hebdo.

While some politicians such as Shireen Mazari, Pakistan’s minister for human rights, have occasionally condemned attacks on the Ahmadi community, others uphold the marginalization of the community.

Ali Muhammad Khan, the minister of state for parliamentary affairs, tweeted last year that blasphemers should have their “heads chopped off”.

Though the tweet is unavailable now, there are other tweets by the minister attacking the community. Minister for Religious Affairs Noor-ul-Haq Qadri also appeared on numerous TV shows to express anti-Ahmadi vitriol.

Ahmadis can’t vote in elections unless they agree to be a part of a separate voters’ list for non-Muslims. In May 2020, the Ahmadis were kept off the National Commission for Minorities, underlining the state’s refusal to recognize the sect as a minority.

“Our principle stance remains that we are not a non-Muslim minority. We will continue to strive for our constitutional and democratic rights,” said Mahmood.

Rights groups and activists have long called out the institutionalized and non-state persecution of minorities in Pakistan, which ranks among “countries of particular concern” under the U.S.’ International Religious Freedom Act.

In addition to the violence against the Ahmadis, at least 1,000 non-Muslim girls were forcibly converted to Islam in Pakistan in 2018 as per the Human Rights Commission of Pakistan.

Scores of temples and churches have been vandalized and demolished by mobs or jihadist groups. Almost 95 percent of pre-Partition Hindu temples no longer exist in the country. However, the targeting of the Ahmadi community remains unique as the sect is denied the freedom of self-identification with their religion.