The government is using convention centers, military bases and even hotels to accommodate an overwhelming number of unaccompanied migrant children. 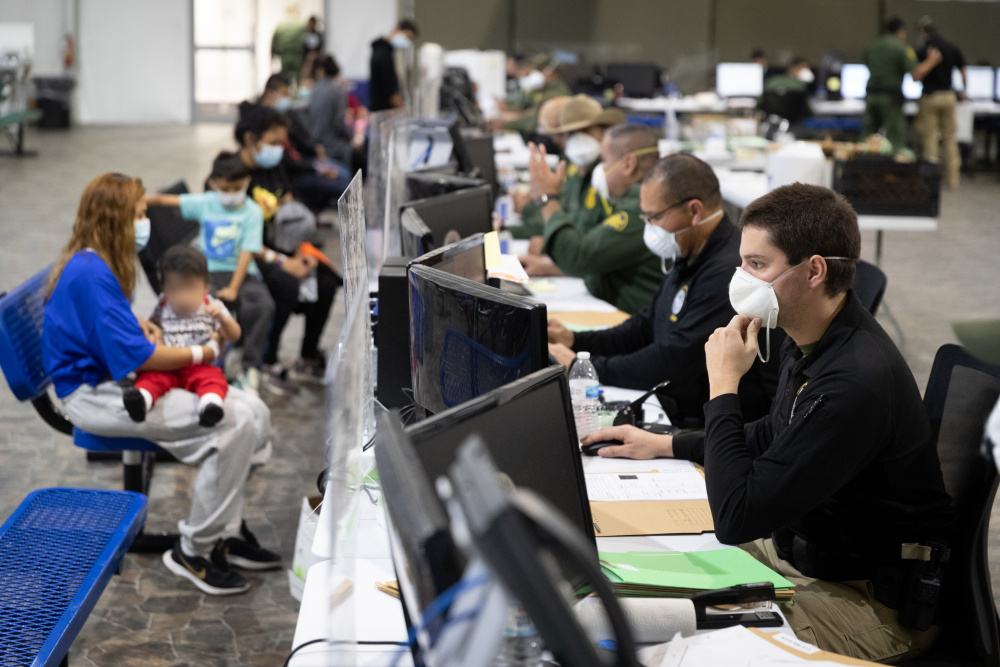 The temporary processing facilities in Donna, Texas, constructed to safely process family units and unaccompanied children in the custody of the U.S. Border Patrol. (Jerry Glaser/Customs and Border Protection)

As U.S. Customs and Border Protection encounters nearly 600 unaccompanied children a day at the southwestern border as of this week, the Biden administration is scrambling to provide enough facilities to receive and shelter them.

To date, more than 4,200 children are in custody, and 2,943 of them have been held over the 72-hour legal limit, according to media reports.

“The Border Patrol facilities have become crowded with children, and the 72-hour time frame for the transfer of children from the Border Patrol to the Department of Human Services is not always met,” Homeland Security Secretary Alejandro N. Mayorkas said in a March 16 statement.  “Health and Human Services has not had the capacity to intake the number of unaccompanied children we have been encountering.”

President Joseph R. Biden Jr. on Thursday, during his first press conference since he took office on Jan. 20, was asked about the living conditions of migrants. “Is that a serious question?” he said. “Is it acceptable to me? Come on.”

The president was asked to respond to images and video recently released by Customs and Border Protection of an overcrowded facility in Donna, Texas.

“That’s why we’re going to be moving 1,000 of those kids out quickly,” he said. “That’s why I got Fort Bliss opened up. That’s why I’ve been working from the moment this started to happen to try to find additional access for children to be able to safely … be housed while we follow through on the rest of what’s happening.”

The president also said he has asked Vice President Kamala Harris to lead the effort to stem migration at the border.

Meanwhile, the Department of Homeland Security is facing challenges in housing the increasing numbers of unaccompanied child migrants at the southern border. Temporary emergency shelters have been created by refitting spaces in government facilities, military bases and a former camp for oil workers.

The Department of Health and Human Services has opened temporary housing for 3,000 teens at the Kay Bailey Hutchison Convention Center Dallas, and plans are for the San Diego Convention Center to house child migrants as well.

The Federal Emergency Management Agency stated on March 12 that the American Rescue Plan Act of 2021 includes $110 million to help organizations across the country to provide humanitarian assistance to migrants from the southern border.

Unaccompanied migrant children are received at Customs and Border Protection facilities and are then turned over to the Department of Health and Human Services for care while sponsors, including family, are determined. Border facilities are meant to be pass-through hubs for processing, with children released within 72 hours.

The department’s Administration for Children and Families has a network of over 200 licensed facilities with 13,500 licensed beds, overseen by the Office of Refugee Resettlement. But as of March 22, there are approximately 11,100 in the office’s care, the administration said. Average time before a child’s placement with a sponsor is 37 days.

Emergency housing known as Influx Care Facilities are temporary shelters that have a more relaxed standard than licensed permanent structures. This type of housing is typically run by private contractors.

In February, the Biden administration reactivated a facility for unaccompanied child migrants ages 13-17 in Carrizo Springs, Texas. The Office of Refugee Resettlement said Tuesday that it is working to increase its licensed bed capacity from 952 to about 13,500. As of March 23, there are 810 boys at the shelter and no girls.

Two military bases in Texas have been approved by the Pentagon for emergency housing for migrant children: Joint Base San Antonio-Lackland and Fort Bliss.

An overflow facility at a property called Target Lodge Pecos North in Pecos, Texas, is being used to temporarily house 500 migrant children, with the potential to expand to accommodate 2,000.

San Antonio-based nonprofit Endeavors has an $86.9 million contract with the government to provide 1,239 hotel beds and other services, including COVID-19 testing, according to Immigration and Customs Enforcement spokesperson Danielle Bennett.

“Our border is not open,” said Immigration and Customs Enforcement Acting Director Tae D. Johnson. “The majority of individuals continue to be expelled under the Centers for Disease Control’s public health authority.”

Biden said during his Thursday press conference that “the vast majority, the overwhelming majority of people coming to the border and crossing are being sent back.”

In addition to single adults, “we’re sending back the vast majority of families that are coming,” Biden said, adding that his administration is working with Mexico to take more of those families.

Shortly after taking office, Biden signed executive orders that paused deportations and changed the “remain in Mexico” migrant policy of the Trump administration.

“We’re going to do a lot in our administration,” Biden said on Thursday. “We’re going to be spending that $700-plus-million a year to change the … circumstances of why people leave in the first place.”

In response to a comment that perhaps more children are migrating to the U.S. because he’s a “nice guy,” Biden said that such increases happen during the winter months every year, even under the Trump administration.

What’s It Like To Get Taken Down By Tom Hardy?

House Mice Are Wrecking The Ecosystem Of California Islands

The Dance School That Taught Me The Art Of Standing Still