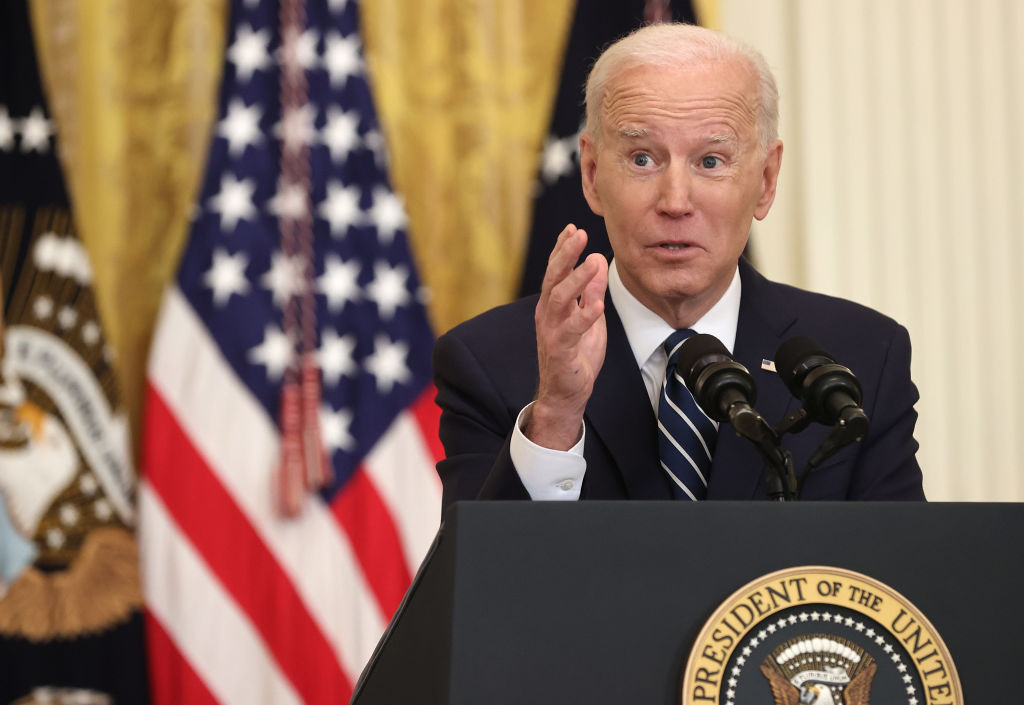 U.S. President Joe Biden answers questions during the first news conference of his presidency. On the 64th day of his administration, Biden faced questions about the coronavirus pandemic, immigration, gun control and other subjects. (Chip Somodevilla/Getty Images)

More than two months into his term, President Joseph R. Biden Jr. held his first press conference Thursday afternoon in the East Room of the White House, where he faced questions on a range of issues.

The president first spoke about his progress in combating the COVID-19 pandemic and the resulting economic fallout, before taking questions on issues including immigration, migrant children, the environment, the filibuster and troops in Afghanistan.

“Help is here, and hope is on the way.” said Biden. “As of yesterday, more than 100 million payments of 1,400 dollars have gone into people’s bank accounts. That’s real money going into people’s pockets bringing relief instantly almost, and millions more will be getting their money very soon.”

Biden also touted a Department of Education survey that shows that nearly half of kindergarten through eighth grade schools are fully open five days a week for in-person learning and vowed to get more schools open by his 100th day.

“I got elected to solve problems,” said Biden.

“Yes, my plan is to run for re-election,” he said, adding that he “fully expects” Vice-President Harris to be on his ticket. However, Biden, 78, says that he is a great “respecter of fate” and has never been able to plan that far ahead for certain.

Biden also said he would be announcing his next major initiative — an infrastructure plan — Friday in Pittsburgh in greater detail. Biden said his plan is to rebuild the nation’s infrastructure—both physical and technical—so that the U.S. can better compete on the world stage and create more good, well-paying jobs.

President Biden on The Filibuster

After weeks of congressional Democrats arguing about the fate of the filibuster, the president weighed in. Biden said that between 1917 and 1971, there were 58 motions to break a filibuster, but last year alone there were five times as many, and he expressed his interest in returning to older filibuster rules.

The president dodged the question of whether it should take 51 or 60 votes to break a filibuster, but seemed to be moving toward supporting further changes.

“If we have to, if there’s complete chaos because of the filibuster, then we’ll have to go beyond what I’m talking about.”

The president resisted promising the current May 1 target to withdraw all troops from Afghanistan would be met, but said he did not expect troops to still be present in the country into 2022.

The Surge Of Unaccompanied Minors At The Border

Biden took questions on the influx of child migrants at the southern border, and waved off concerns that unaccompanied children are coming because of a belief that he will be lenient with them. He said the rise in migration happens every winter, even under President Donald J. Trump.

Although Biden noted his administration’s efforts to open more facilities to house unaccompanied children until their cases can be handled and sponsors found, he said that Vice President Kamala Harris would work with other countries to address the reasons so many leave their homes for the U.S., just as he did when he was Vice President.

“Look around the world. We’re in the midst of a fourth industrial revolution of enormous consequence. Will there be middle class? How will people adjust to these significant changes in science and technology, the environment?” said Biden. “Are our democracies equipped because all the people get to speak?

“That is what is at stake here. We have to prove that democracy works.”

Biden spoke of the time he spent with China’s President Xi Jinping, and how his time as Vice President at the same time that Xi held the equivalent position in China served him well. He stated that despite many disagreements, they communicate well with each other because of that history.