Tlalpeño Soup Is Good For The Soul (And A Hangover)

This spicy Mexican dish is especially popular the morning after a night on the town.
By Carlos Ramírez March 24, 2021
Facebook
Twitter
Linkedin
Email 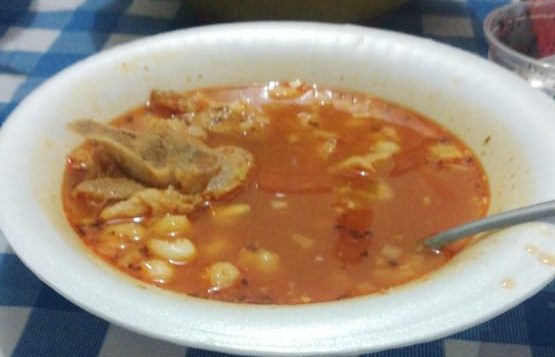 Tlalpeño soup has a contested place of birth, but its popularity is uncontested. (Marymar Alvarez/Café Words)

When hunger calls and one is looking for a healthy, filling and very Mexican dish, Tlalpeño soup is a popular answer.

“Tlalpeño soup has a unique combination of flavors and textures,” said Elvia Prieto Mendoza, a gastronomy graduate from Le Chef College, in Boca del Río, Veracruz. “It is a true ecstasy from the first spoonful.”

The first story says that the soup was born in the 19th century, when then-President Antonio López de Santa Anna visited his vacation home in Xalapa, Veracruz, where he was born. The city was celebrating its patron saint’s festival, and Santa Anna drank a lot. Mexicans believe that spicy food can help people recover from hangovers. So, when President Santa Anna ordered his cooks to prepare a dish to revitalize him, they made a quick survey of the ingredients on hand and created Tlalpeño soup.

The municipality of Tlalpan, in Mexico City, also claims to be the birthplace of this dish. Locals say that Tlalpan’s old tram station had food stalls selling meals, including one that offered the soup. At first, diners called it “Tlalpan’s soup.” Later, the name changed to “Tlalpeño soup,” indicating it came from there.

The third possible place of origin is Talpa de Allende, Jalisco. There is no story tied to the dish here, other than the people of this place are called Talpeños. So, many believe that Tlalpeño is just a corruption of this term.

Just as there are several possible origins for the soup, there are also many different ways to prepare it. However, Tlalpeño soup virtually always includes chicken, rice and chickpeas.

With all those ingredients combined, Tlalpeño soup “is more than enough for the family and leaves everyone feeling satisfied.” said Galván García. “Many people think it is light because it is a soup, but it is quite the opposite.”

Are you interested in preparing this hearty soup? Here’s what you need:

500 g of Manchego or Chihuahua cheese

Bring to a boil chicken, onion and garlic in a large pot and let them cook for 15 minutes. Remove the chicken breast and add rice, chickpeas and epazote. Blend chipotle with tomatoes and add the mix to the broth. Once the rice has popped and the chickpeas are soft, serve in bowls and add shredded chicken, avocado and cheese cubes.

Galván García has a final piece of advice for those who want the perfect taste: cooking Tlalpeño soup on a wood-fired stove enhances its flavor. “People associate its strong flavor with providing relief from a hangover,” she said.

(Translated and edited by Gabriela Olmos, edited by Matthew B. Hall)