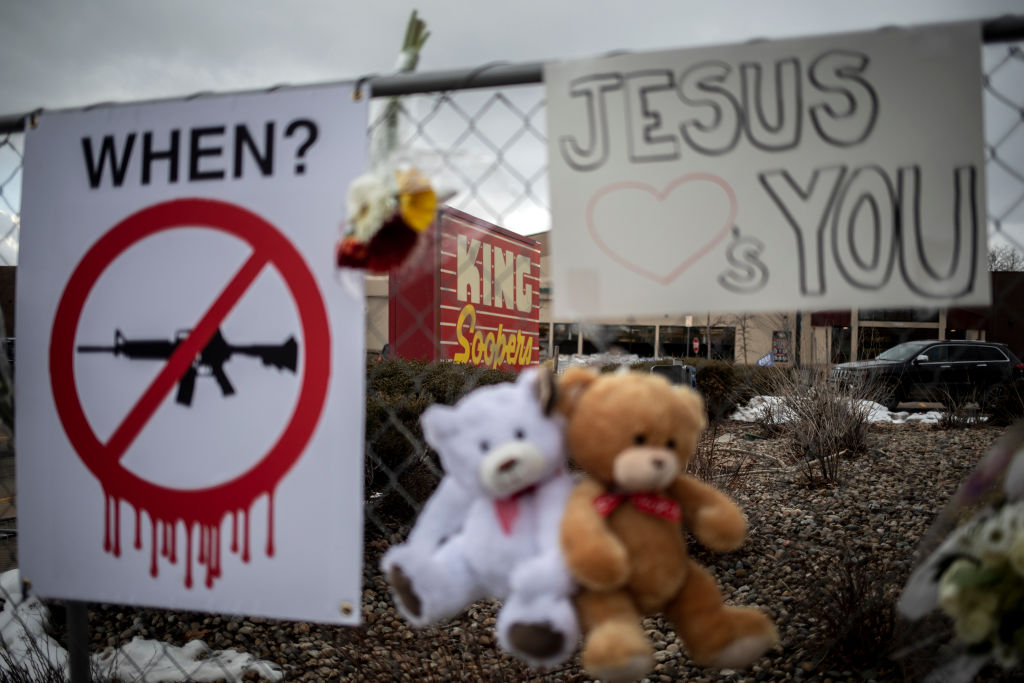 Memorials with signs, teddy bears and flowers are left on fencing surrounding the King Soopers supermarket in Boulder, Colorado, a day after a gunman opened fired there on Monday. The suspect, Ahmad Al Aliwi Alissa, 21, was reportedly charged with killing 10 people, including one police officer. (Chet Strange/Getty Images)

Within 24 hours of Monday’s mass shooting at a supermarket in Boulder, Colorado, President Joseph R. Biden Jr. called for a ban on assault weapons and high-capacity magazines, and closing the loopholes on gun controls.

“I don’t need to wait another minute, let alone an hour, to take common-sense steps that will save lives in the future and to urge my colleagues in the House and Senate to act,” the president said during his remarks from the White House on Tuesday afternoon.

“This is not and should not be a partisan issue; this is an American issue,” he said. “It will save lives — American lives — and we have to act.”

Biden has long been an advocate for reforming gun laws. During his tenure as senator, in 1994 he secured passage, along with Sen. Dianne Feinstein (D-Calif.), of 10-year bans on assault weapons and high capacity magazines.

The president on Tuesday also urged the Senate “to immediately pass the two House-passed bills that close loopholes in the background check system,” including the “Charleston” loophole. Under that so-called “loophole,” gun dealers may complete sales after three days if a buyer’s background check has not been completed by the FBI. If the buyer is later determined not to have been eligible to make the purchase, the matter is referred to the Bureau of Alcohol, Tobacco, Firearms and Explosives.

The U.S. House of Representatives on March 11 passed two gun control measures adding requirements to the background check process in an effort to prevent approvals for those who do not qualify, due to posing a danger to themselves or others. The legislation is expected to face major challenges in the evenly split Senate.

Just 10 days before Monday’s attack, a Boulder assault weapons ban from 2018 (ordinances 8245 and 8259) was blocked by Boulder County District Court Judge Andrew Hartman. The judge ruled that the city cannot preempt state law. The ruling was supported by the National Rifle Association Institute for Legislative Action.

In spite of two mass shootings in the state in recent years — the 1999 shooting at Columbine High School and the movie theater shooting in Aurora in 2012 — Colorado lawmakers have not moved to close further gun purchasing loopholes.

A statement on Tuesday from Lawrence Pacheco, director of communications for the Colorado Attorney General’s Office, said: “The attorney general is taking more time to study ghost guns and what might be needed to regulate them.”

Boulder Police Officer Talley “died charging into the line of fire,” Boulder County District Attorney Michael Dougherty said at a press conference. Talley was 51 years old and the father of seven children. He had been with the department since 2010.

After expressing his condolences, Colorado Gov. Jared Polis said, “We simply can’t let this be accepted as anything close to normal occurrence.”

He ordered that flags be lowered to half-staff for 10 days from April 1 “to honor and remember those we lost.”

“If we are truly invested in saving lives, then we must have the willpower to act and to pass meaningful gun reform. The time for inaction is over,” Rep. Joe Neguse (D-Colo.) said in a statement.