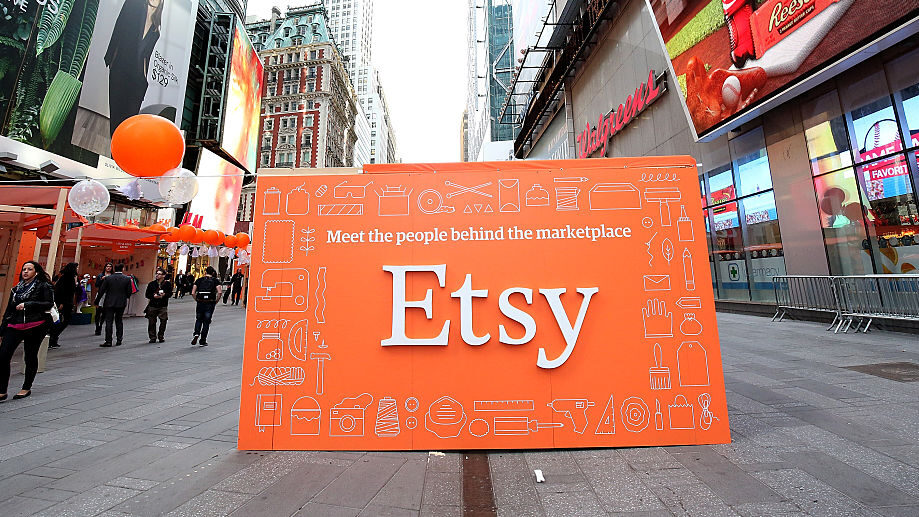 Etsy business The Card Bureau speaks out against Paper Source who has filed for bankruptcy recently after ordering $15,000 worth of stock from The Card Bureau. (Photo by Paul Zimmerman/Getty Images for NASDAQ)

Janie Velencia, founder of the Etsy-based Card Bureau, went viral after she Tweeted that her company is being cheated out of $15,000 because a large stationery distributor that ordered stock from her is filing for bankruptcy.

“If you’re just tuning in [Paper Source] declared bankruptcy this week. But before they did that, they put in lots of large orders with over 250 small independent companies knowing that they wouldn’t have to pay for the inventory after the fact,” Velencia said in a 14-post Tweet thread with more than 20,000 engagements.

She claimed the company ordered more from her small company in a 60-day period than it did in all of 2020, then declared bankruptcy.

If you’re just tuning in, @Paper_Source declared bankruptcy this week. But before they did that, they put in lots of large orders with over 250 small independent companies knowing that they wouldn’t have to pay for the inventory after the fact. THREAD

Paper Source is a national, brick-and-mortar and e-commerce retail corporation that sells stationery and gifts — often sourcing stock from small businesses. Velencia, a former political journalist whose feminist-oriented business turns out cards, candles and gifts to customers through Etsy, is one of its vendors.

She claims the company ordered $15,000 worth of stock from her before filing for bankruptcy without paying. In her Tweets, Velencia said she and other companies that sent orders to Paper Source “might get paid on orders placed 20 days prior” to bankruptcy, but also said “small businesses will be the last in line,” and that repayment “could take years…”

Paper Source is too big to fail, she wrote, adding the company told her that it intends to keep placing orders and expects her to “deliver on them post bankruptcy”.

“…this all feels so unjust. It’s despicable. As a small business, I would never be able to get away with what they’re doing. I would not be able to simply declare bankruptcy and have all my problems go away,” she wrote

Paper Source’s March 2 bankruptcy filing claimed its revenue went from $153 million in 2019 to $104 million in 2020 due to government-mandated shutdowns, capacity restrictions, and the general decline of store traffic and purchasing brought on by the ongoing COVID-19 pandemic.

“Prior to the outbreak of the COVID-19 pandemic, the debtors had been enjoying rapid expansion and sustained sales growth, and had recently undertaken a significant acquisition,” the bankruptcy filing read. “However, as with many other retail brands, the debtors have sustained deep damage to their finances and operations as a result of the ongoing COVID-19 pandemic.”

With 150 locations in 2020, including 27 through purchase of failing competitor Papyrus just before COVID-19 lockdowns began, Paper Source has been a growing player in its industry since it was founded over 30 years ago. It was bought in 2013 by Investcorp, a major investment firm based out of the Middle East that recently raised one billion dollars for investing in U.S. assets.

Paper Source’s bankruptcy hearing is scheduled for March 25, and it plans to close 11 stores during the bankruptcy sales process.

Velencia’s claims against Paper Source, while unsubstantiated, brought significant support on Twitter. One respondent compared Paper Source’s pre-bankruptcy orders to “maxing out your credit card and then reporting it stolen.”

In the court filing documents, Paper Source said that it intends to “continue operations without interruption, including minimizing any potential adverse effects to the debtors’ businesses, customers, employees, trade partners and other key stakeholders.”

Paper Source did not respond to multiple requests from Zenger News on how many small businesses it expects to reimburse, or how long vendors will have to wait before knowing about reimbursements.

Valencia declined to detail her comments further to Zenger News, saying, “I suspect their actions were perfectly legal” even as her Tweet-thread accused Paper Source of cooking its books through the orders.

Entrepreneur and former Presby Environmental CEO Lee Rashkin said that Velencia’s gripe with Paper Source may be legitimate, but that small business owners need to have a different takeaway: going after big players isn’t always the right move.

“I saw this firsthand when growing a national business in my twenties and thirties,” he said. “Competition is fierce, and larger companies use a different playbook. This often includes a fiduciary duty by officers to do whatever is in the best interest of shareholders.”

“The key is to have a strong financial foundation for your company,” said Rashkin. “It doesn’t matter if you make $100,000 a year or $100,000,000 a year — without money in the bank, the right cash flow strategy, and the right net profit, every company is at risk of becoming the next Card Bureau.”

Business consultant Susan Trivers agreed. “Every business, and especially a small one, needs a variety of buyers, so they aren’t dependent one on large one for a significant portion of their revenue. The greater the diversity of buyers, the lower the risk for the company that revenue will take a sudden, large hit.”

According to Trivers, one large customer can have benefits “such as a short sales cycle, established payments systems, and the ability to create just for them,” but “these benefits are outweighed by the revenue risk.” She said that Velencia should “continue to build her business … and let her professional advisors handle the Paper Source situation.”